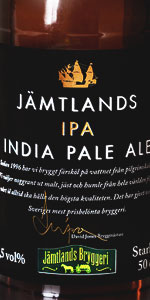 A: clear amber, with a head that extends beyond the glass

T: definitely less cold than expected, but very good; this tasty treat flows through the froth with a needly punch from the hops (no idea on the varietal, but it has been said that they used to use Cascade); some toffee notes and a bitter-orange finish

M: the malt takes over, and the body matches the decent amount of hoppiness

D: a mighty fine IPA from Sweden, I'd probably drink this a lot if I lived there

Jämtlands Bryggeri is a brewery which is think is really good, even though they've seem to been a bit un-even lately.

Smells decent with lots of hops, but there is something slightly disturbing in the smell, almost slightly sour. But I don't know if it feels infected, maybe just the way it smells.

How is the taste then? It's way better I tell you! Lots of hops, both English and American I think with a nice slightly sweet background of malts. Very filling mouthfeel.

If they get rid of the slightly sour smell on this one, it would probably be one of the best Swedish IPA's. I would love to have this one on a hot summer day.