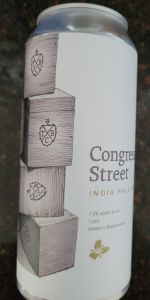 Pours a nicely hazy golden orange color with the most beautiful dense white head you’ve ever seen. The nose is juicy tangerines, mango, and passion fruit (thank you Galaxy!), and there’s a biscuity malt aroma, too.

The tangerine flavor is forward on the taste, and the mango and passion flavors really shine, but the star for me is the biscuity malt flavor, which proves nice balance to the significantly magnificent hop flavors.

The mouthfeel is a bit on the dry side, which I love - this actually sits more on the WCIPA side of the ledger than it does on the NEIPA side, IMHO, which is fine by me.

A little on the weak side compared to other Trillium IPAs and DIPAs. I'll drink it over IPAs from most other breweries,, but it's not my first choice among Trilliums.

Can to snifter. Thanks to DC for sharing.

Unbelievably soft, like drinking flavored silk. Very unique, does not taste how it smells. Has a nice blend of citrus and grass notes, this one leans more to the malty side. Has a mild, clean, dry finish. Creamy and smooth and offers a nice change of pace from the world class juice bombs and/or other NEIPAs that have a dynamic flavor profile. Congress Street's flavor profile offers a certain...tranquility instead.

Interesting and refreshing, and dam solid, but not sure why it has 100 score. I'd give it a 91

a; Opaque orange with a half finger thick white head which receded to thick surface foam and dense lacing.

o: Unusual NEIPA with aromas which do not match the flavor. Somewhat reminiscent of Heady Topper but stronger grassy notes and less citrus.

A: dark orange orange like a pumpkin in November
A: light, hoppy citrus like the Easter Bunny on vacation in Malibu
T: dry, pithy orange juice with a dollop of alcohol - Minute Maid has nothing on this
F: beautifully soft like running your hands through princess Jasmine’s hair.

I really like this beer. It’s not the best of the best, but it’s damn solid for being a flagship.

Drank on 8/6/2019 - traveling hotel beer. Classy plastic glass at the Holiday Inn. Lots of mango, a bit pithy. Both juicy and resinous AND lightly bitter. Good one. I like this a lot. Beautiful hazy pour with tons of mouth feel.

World class, indeed! Beautiful foamy white head, hazy golden pour. Tropical fruit, citrus and pine flavors all vie for attention on your palate. The flavors that unfold do not attack you, they draw you in with understated subtlety.

One of my favorite IPAs. The drinkability of a witbeer with the flavor of a DIPA. Amazing

T - Dank, juicy with a little but of spice. Peach, passionfruit with a little bit of citrus. The fruitiness carries from start to finish and ends on the sweeter side with very slight bitterness.

M - Full body with chewiness and a wet finish on the tongue.

O - Trillium has this one dialed in to the sweet spot.

Dark orange body, thick but slightly translucent, with a short white head and extravagant tiny bubble lacing. Nose is orange juice, slightly funky, with mango and other tropical notes in the background. Stronger tropical flavors, pineapple and passion fruit with the mango and citrus, and a close that is mild and clean. What a strong showing. This beer is so tightly dialed in, it is remarkable. Truly a great one.

Two finger head with retention on a beautifully light-hearted hazy hue. Nose and taste is a little tropical but mostly pineapple and pine with some great and subtle herbal qualities. Shared with a friend then immediately went to work for a Trillium trade! I've tried to do it again with no bites, I won't give up - this place lives up to the hype!

L: pours thick and pale orange in color. Complete haze with 2 fingers if fluffy foam
S: oranges, tangerines, grapefruits, lemons...sweet but with the Rhine peels to balance it with slight twangy bitterness.
T: awesome balanced beer. Lots of citrus, but it has slight peel dank and bitterness near the end but not off putting and actually love the balance. Slight cracker malt in there too. Just awesome.
F: wow, an awesome drinker. Thick, velvet smooth, pillow soft. This is an absolute crusher

Tastes as good as it smells with everything listed in the description above plus grapefruit, lemon, Razzles candy, faint piney notes, orange juice and fresh cut grass. The same dank qualities from the nose come through with the flavor and add nice complexities.

Yeah, my can of this is old - really old (7/21/16) but this is a classic and I vowed to have it, along with everything else in my basement, before it burst or broke. Even though this was quite a bit of a malt bomb when I opened it, it wasn't bad and was still enjoyable to a large extent. Very little sediment was poured out as well, which made the experience that much better!

Not a bad pour to this as the liquid was a muted peach with a ton of cloudiness to it. The head was sufficient and there was a bit of lacing here and there after the thin collar at the top, but it wasn't terribly thick or bright. Not a lot of pine in the nose but there was enough orange, tangerine, and cream in the nose to keep this soft. The clementine and rind came through in the taste along with a citrus sweetness that made this quite soft and easy to drink. A mild dank hop presence came through in the aftertaste and it was no secret that this felt like a malt bomb, given how much was in here. Loads of wheat gave this body as this was not terribly juicy nor dry from start to finish...

Just the right amount of alcohol was present too, as I felt a bit of warming but not enough to serve as a deterrent. This was a nice beer that had everything in proportion and was quite easy to quaff. I have no idea who Paul and Jess are but if they had this at their wedding, it would have been a great choice!

Interesting & refreshing, but not revelatory.

Pours two big fingers of fluffy white head into my willi becher glass. Dissipates a little bit, bit half a finger hangs around for quite a while. Body is redundant at this point – juice. Overall looks good so far.

It’s beginning to get very difficult to describe the differences between these NEIPA’s, they all smell so similar. Grapefruit, citrus dominate. Mild notes of dank/earthy hops in the background. Some sweetness muddling in here. Smells fine, I’m getting quite bored of drinking these though.

Flavor is refreshing, dank, earthy, borderline dirty hops are most present. Light citrus, mango is most distinguishable. This is a good beer, still prefer a solid west coast though.

Carbonation is light, body is medium-light. Bitterness is moderately low, and doesn’t linger, maybe one day we’ll all remember putting hops in our boil isn’t a bad thing. A little sweet, though it doesn’t coat my mouth. I don’t know why the carbonation is usually low in Trillium beers, would like something a little more effervescent. Mouthfeel overall is whatever, to style I guess, I want more character.

Overall a fine NEIPA, I’ll try to leave it at that.

Columbus Hop is biting right up front. Not a huge fan of this hop. It’s creamy. Opposite beer for me. Dulled when it warmed up. Showed it’s single hopped “ Sheare’ness “. Very good. Another good one from Trill. Need to try the Dub version of this!

I expected a little more for the price they are charging. Solid IPA, nothing more. The price gouging makes a ride to Charlton or VT for true world class beer a lot more appealing

Pours a bright, opaque orange with a finger and a half of white foam for head. Head retention is good, as is the lacing left behind. Aroma is orange, papaya, mango, melon, and pineapple layered over biting pale and wheat malt notes. Lovely citrusy aroma luring in the lips for a sip. Flavor profile is smooth and round notes of orange, pineapple, melon, and mango. Tropical fruits are suspended over a base of wheat, pale, and biscuity malt notes. Hops absolutely dominate the flavor profile ratio here. Mouth feel is medium-thick, with a filling, grainy, velvety texture that drives this beers presence from modest to unabashed. Overall, it's pack-a-punch without remorse. It carries a heavy weight, and manages to deliver it unbroken. Big citrus notes, both domestic and tropical, layered over thin, but firm, malts.

Appearance: the body is a cross between baby yellow and tan. Totally opaque with haze with a 1-finger white head with good retention.

Aroma: super hoppy, but there this is an off aroma of ammonia and Windex.

Flavor: sticky lupulin that overpowers any other flavors that the hops might yield. There are no standout distinctive flavors to speak of – really just generically hoppy. There malt base is a very good start point; I’d try this beer repeatedly using different hop combinations.

Mouthfeel: medium-medium. Appropriate for style, but nothing to write home about.

Overall: the hype precedes this beer. It is good, but no beer than many unhyped NE IPAs readily available in my market (Denver). Overall, I’m not tremendously impressed.

Tastes and smells like biting into a citrus fruit on a freshly cut lawn beside a copse of pine trees. Great mouthfeel, very drinkable. Enough bitterness to balance out the juiciness nicely. A stalwart in Trillium’s awesome lineup.

This should be top 10 ipa. Had in draft at the Greenway beer garden and in a 4 pack from the Congress st Brewery. Got a mixed case and no surprise , they are all incredible.