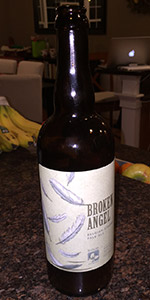 Notes: Light golden in color with a slightly hazy appearance and frothy white head. The nose expressed notes of white pepper, clove and banana. Bright and earthy on the palate, balanced by pleasant spice notes and an extremely dry, effervescent finish.

BJCP doesn’t have a Belgian strong pale ale category, so I will go off Belgian pale ale, and assume this will be a supped up version.

Pours a nice finger of white head into my stemless tulip glass. Retention is somewhat poor, fades after a minute. Initial lacing looks very nice. Body is a golden yellow. It’s trying to be clear, but it looks like there are some small particles in suspension that are giving it the smallest cloudy appearance. Medium amount of bubbles coming up. Looks pretty good so far.

At first something smelled off, this is the freshest can I could get, canned almost 3 months ago. Still, it’s a Belgian beer, at 9%, should last fine. After deliberation, it’s not off, just extremely nutty, which actually isn’t off style, but this is definitely a little much for me. Coming across as almost peanut butter, not really any bready/toffee notes, maybe a touch of burnt toast. Some esters are hidden in here, but it’s hard to pick up anything else under this extreme nutty profile. I haven’t had a Belgian pale in a while, but I can’t fathom the nut aroma being acceptable at this level. I’ll give it an ok grade because it’s not an off flavor, and it’s technically not off style, but this is a little extreme, and certainly has me questioning the upcoming flavor.

Flavor is a little more balanced. Some light fruity esters hit for a short period, and return briefly in the finish. A little peppery. Slightly sweeter than I would like, but not unexpected there – light notes of caramel. Zero nuttiness at first, but it starts to creep out pretty heavily as it warms; again, not sure it works well here. The beer hides its alcohol very well. Overall it’s ok, it doesn’t have much of an identity though. It tastes fine, and I wont mind finishing it, but it isn’t wowing me in any direction.

The mouthfeel is pretty good. As mentioned, I would like it a little drier, but I can’t be too picky at 9 %. There is basically no alcohol bite which is very nice. Carbonation is medium-high. Body is pretty light considering the small amount of sugar. Given the abv, this is a very light and pretty impressive mouthfeel.

The drinkability is pretty high here. It’s not over the top tasty, but for a high gravity beer, it hides the alcohol well, and sits very light on the tongue.

The appearance turned out decent. Lacing was patchy, but pretty consistent all the way down.

Overall an ok beer. The nutty nose was a little much, and the flavor slightly lackluster, but other than that it’s not a bad brew.

Thanks goes out to TheMattJones88 for this brew.

Pours a hazy lemon color with a starting head of 1 finger, receding to a thin moss of foam on top, thin enough that I could empty the whole can into a tumbler glass without it spilling, tapping and all. The head retention is nada.

Aromas of lemon and sea salt, slight pillowy yeast, maybe some hints of orange peel. Hard to get a nose on it. Smelling like a cross between a Witbier and a Belgian Pale Ale.

Flavor is mostly phenols with peppery yeast and lemon. I don't get much in the way of hops - if there was a hop presence and it had faded I would be tasting faded hops, instead I get nothing on the hop side. Lots of pale malt, probably pilsner or pale ale malt; slight white bread; dish detergent, very very faint finish of lemony hop.

Feel is very carbonated and crispy, leaving a starchy coating on the tongue but it disappears quickly into a belgo dryness. Mostly crisp. That's the main MF.

Overall, probably the least impressive Trillium beer I've had yet. It's not offensive but it's just not interesting. I figured Trillium would somehow adapt the haze to the Belgian style but it comes across as a basic bitch BPA. Too bad, I know Trillium can do better.

F: General moderate mouthfeel, fairly stirring carbonation. ABV and zippiness makes this a slower drinker than that combination would suggest, though. Construction is good, maybe the spice is a bit much and off-balance.

O: In general, this is a formidable Belgian, but I'd probably like it better if it was lower ABV and a bit dialed back on the spice.

A - Poured into my Duvel tulip a crystal clear light gold hue with a one finger fizzy white head that fades rather quickly to leave a fizzy wispy head. No real lacing.

T - Taste is similar to the nose. Little wet cardboard, some light metallic notes as well. Light banana and cloves, decent esters and belgian yeast. Decent green apples along with flashes of alcohol.

O - Overall this was an incredibly underwhelming. The ester notes were pleasant but otherwise it's a boozy thin mess.

Canned 01/11/18, it pours clear gold color with a lot of sediment floating around and a 1-2 finger white foamy head that faded quickly and left minimal spotty lacing. Surprised that the head leaves basically no lacing.

Has the appearance of a macro-lager. A solid finger of head that dissipates quickly. Apple, banana and clove notes on the smell. Taste similar to smell. Mouth-feel not too thin and watery, but definitely no creaminess.

Tastes like a traditional summer ale at first and looks like a pilsner, with little lacing after the original pour. It's a subtle beer that's very drinkable with sufficient carbonation, yet smooth to the palate. However, because of the high alcohol content, it sneaks up on you in a good way and has a vanilla, fruity, and lemon-like after taste. So far, it's my favorite Trillium beer.

750 ml bottle poured into a tulip

A- A fairly clear golden copper with a two finger white head.

Taste brings more of the same but seems a bit watery, like a thinner malt, golden Belgian blond malts with a little toasty sweet candy character, maybe a touch of candi sugar, but seems thin and watery somehow, mild perfumey phenols with a bit of spice, mild fruity esters as well more pear and a bit of apple, some booze warmth and tingle with almost fusel alcohol but not quite there, a bit of a grassy hop bitterness on the back end

Mouth is med bod but thin and watery feeling, light on the carbonation too, and warming tingly booze

Overall mixed, it has some potential but the lack of malt backbone and thin watery feel, plus lack of carbonation and hot booze, was def a downfall.

Pretty much a prototype Belgian strong ale. Simple cereal grain malt. Banana, booze and Belgian yeast esters. A tiny hint of bitterness on back end. It's not bad. Just not a huge fan of the style.

Poured from a 750ml bottle into a tulip glass.

A: The beer is a bright gold color with a short white head that fades slowly and leaves a thin lace on the glass.

T: The taste starts out sweet with flavors of caramel and bananas that are quickly followed by a burst of peppery spice. The malt character is hearty but not too heavy. The hops presence is mild but complementary and brings a good balance. The after-taste is slightly sweet and slightly bready.

O: Tasty, goes down easily, not too filling, good kick, good representation of style, this is a solid beer to drink for a while.

22oz bottle poured into a teku

A- pours a slightly hazy golden-yellow color with a small foamy white head that disappears quickly, leaving nothing behind

O- solid example of the style, not many breweries still attempt this awesome style

Poured from a 25.4 oz bottle into a Snorkel glass. No date on the bottle that I can find.
A fairly clear golden yellow body with a thin cap of white head that leaves some decent lacing in the glass.
Getting plenty of pepper, spice and some fruits, apples, pears on the nose.
The taste reminds me of juicy ripe pear with some banana and pepper, follows up with the aroma; nice bitterness on the end which I think evens it out as it does seem a little sweet at first.
Nice light mouth feel; juicy in the middle and finishes dry. Mild amount of carbonation.
Overall, this is a tasty beer. Easy to drink, way too easy in my opinion, for a 9% abv beer. First beer I've had from Trillium and this one doesn't disappoint.

The beer comes in a pale to medium amber, much darker for the style.

The flavor follows with overripe banana, bubble gum, clove, a medium grainy, sweet biscuits, mouthfeel is svelte and makes the beer even more drinkable than the style. Dries out beautifully with some bitterness and lingering perfumey spice notes.

To some degree, i always feel out of my element reviewing a beer style that I don't know extremely well; but this beer is not quite clear and bright enough, a little sweet and lacks a more effervescent carbonation that i might expect in the style; good beer but I have had better

Pours clear gold with a short-lived head, moderate retention, and light lacing. Aromatics are largely bubble gum with some pear, bannana, and clove following through. Light bodied with an almost syrupy mouthfeel. Honey and light malt lead off the palate with clovey phenols and apples. Sweetish and a bit cloying. Finishes with shades of fruit cocktail syrup and warming alcohol.

The beer is undercarbonated for the style and just not remarkable otherwise.

Look: An unimpressive yellow that can be seen through.

Taste: Tastes almost identical to the smell with an enjoyable very bitter kick to it.

Feeling: There's a gentle alcohol feeling with a carbonation that leaves my mouth asking for more.

Overall: A fairly enjoyable beer that I would happily purchase again if I find myself in Massachusetts again.

Something different from Trillium. Pours a clear (rare for Trillium) gold, not too much head. I'm tasting pear and apple, with a touch of booze on the back end. Nice touch.

Usually around this time every year, I get into this style a bit. Then I'm perfectly fine going several months without as I tend to focus on stouts and various ales. Solid offering, but doesn't stick out amongst the many other Belgians I've had. But it's nice to see Trillium jump into other styles besides pale ales/IPAs/stouts once in a while.

Interesting bright golden color for a Belgian strong Ale, typical bready yeasty biscuit smell and flavor, and quite light on mouthfeel for the style. Good brew, but not the world class that could be expected from Trillium.

From a growler. Pours slightly opaque, bright yellow in color with 1/2 inch head. Taste is big pear, light peach a good dose of Belgian spices--coriander, clove. Medium bodied, slightly sweet, with medium carbonation...super smooth. Not a style I typically get into, but this is about as good as it gets domestically. Would get this again. Good beer and definitely worth seeking out if you love this style.

Broken Angel from Trillium Brewing Company
Beer rating: 90 out of 100 with 202 ratings