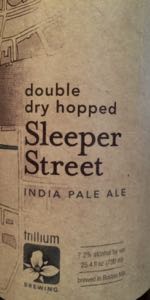 Notes: Same base grist as Sleeper Street IPA, but with a double dose of El Dorado in the dry hop. These El Dorado hops impart a powerful aroma of distinctive lime zest, along with notes of grapefruit juice, and a subtle woodsy earthiness. The taste is bright, floral, and citrusy hop upfront and finishes with candied lime. As with all Trillium “Street” IPA’s, Double Dry Hopped Sleeper Street is dry with medium-light body and a crisp finish.

Almost 8 weeks old so certainly not super fresh by IPA standards, but not old yet either. A lovely looking beer as all Trillium IPAs always are. Love the color and head after the pour. The smell is ripe Mellon and hops. It could be a little more present but I think that dies off after a few weeks, so maybe I’m losing some on the nose due to the age. Still smells great though. On the pallet it’s a wonderful hop bitterness and sweetness of a hazy. The East coast breweries are similar compared to my Midwest ones where they’re less sweet and that’s usually in my liking. Overall a wonderful beer and I’d buy again anytime.

Look: Very hazy and turbid. A dull orange color; kind of looks like peach juice. There was a rocky head but it dissipated to nothing.

Taste: The taste is a bit more redeeming. It's interesting that this beer has a lot going on with tons of dry-hopping, yet the bitterness is almost nothing on the finish. The bitterness is there on the finish, but it is quickly gone as it doesn't linger on the palate much. The finish also has a nice mouthfeel and creaminess to it. It's a bit juicy and has some nondescript tropical, stone fruit, and citrus flavors. That being said, it's not particularly complex. One thing that I do like about this is that it has a nice tangy acidity to it. It's by no means sour, but this helps to have this to make the beer more refreshing and drinkable. As I am getting more into this, it's becoming a bit more palatable. Has some pleasant pina colada and orange creamsicle flavor vibes, as well as some mango and apricot flavors. More of the chewable vitamin flavor and mouthfeel is also coming to the forefront.

Feel: Has a soft, creamy mouthfeel to it. Appropriately carbonated.

Overall: This is my second Trillium beer. I think that it's overall a good beer, but I personally don't understand why this beer is so highly rated. It's definitely a well-made beer. I guess that I just don't really see the allure with the double dry hopped New England Style IPAs that can be super duper hoppy, dank, juicy, etc. Just give me a lower ABV NEIPA, West Coast IPA, or Pale Ale and I will generally be more satisfied. I also don't think that I am such a big fan of the hop varieties used here; IMHO, they're not very expressive or aromatic. The last beer that I had with El Dorado and Citra hops had a strong celery flavor; not saying that I get that here, but it does have a secondary vegetal/herbal component. I'm not sure what beers that I have had feature Columbus hops.

The flavor starts with a pale, unfermented malt sweetness. Decent body with an elevated effervescence. The malt base almost like bubblegum. There's a solid presence of unfiltered yeast showing up just before a white pepper hop finish. Moderate length aftertaste for a DIPA.

Having visited the legendary Treehouse during the day, we then hopped on the train to Boston in order to visit the highly rated Trillium Brewery.

The taste features juicy notes of tropical fruit, particularly mango and pineapple, along with intense zesty and tangy citrus flavors. Notes of stone fruit evoke apricot and peach. Spicy notes of pine resin and grass as well as a firm but accessible bitterness that balances the sweetness of the juicy notes and the malts. The finish is spicy, long and dry. Medium to full bodied with a mouthfeel that alternates between smooth and crisp. The carbonation is moderate and just right.

I’m so glad I popped my Trillium cherry, as this brew was simply outstanding.

Pours a pale orange, milky and opaque, off white head, short but persistent, with curtains of lacing. Nose is banana and pineapple, mango and orange, and taste is similar, adding a pine-mint freshness, with a pithy acidic bite in the finish. One of the best I’ve had from Trillium.

Picked this up on Monday at Canton. Canned 6/3

T: Citrus fruit as well as piney, bitter hops. I normally don't notice sugary/sweet after-taste, but I picked that up in this one.

F: Peppery and better. Excellent level of carbonation, though.

O: A very interesting IPA with a unique hop blend. The nose on this beer is wonderful, but there's a bitterness to this one that keeps it from being particularly smooth. It was worth a try, but don't think I'll be returning this one.