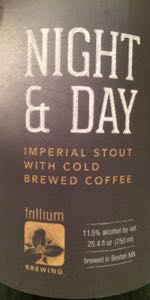 As the stout is built as ideal nightcap, and on the flip-side coffee is the morning's pick-me-up, Trillium's coffee-infused imperial stout might be built for both night and day. The beer by that exact namesake is powerful in effects but is a smooth and robust beer that dangerously easy on the palate.

Night & Day pours the expected onyx-black, looking exactly like espresso, even equipped with a tainty coffee-like lace of froth along the surface. The bold nutty, roasty, toasty, cocoa, chicory character of well-brewed coffee emerges first to entice the nose. While its taste is certainly robust and roasty as well, it has a finesse early palate with the creamy smoothness of nougat sweetness and burnt caramel.

Although the stout character is the exoskeleton to keep the beer propped up, the middle palate is easily seduced by the high coffee character that carries earthy root, cocoa, tree bark and chicory along with a hint of licorice, black cherry and plum to accent the dark flavors of roasted grain and cold-press coffee. As its soft marshmallowy texture supports the sweetness, the sugars slowly dissolve and leave the finish with a creamy roast character.

Its full but relaxed body is smooth and silky on the finish with a strong coffee-like bitterness and a spicy booze taste and feel. An aftertaste of nutty breakfast blends, burnt caramel and roasted pecans blend into the next brandy-like sip with ease.

Pour is extremely viscous and black. It has a very dark tan/mocha head that is super frothy and goes from about 2" down to a 1/2" cap.

Overall, this is a hair on the sweet side, but the coffee flavors are wonderfull and smooth. Not bitter at all. Also dangerously drinkable for 11.5%. I didnt notice any alcohol flavor at all. The body is where this one shines the brightest though. A nice, creamy, silky smooth full bodied stout. Would love to have more. A world class coffee stout for me.

Appearance - Pours a deep, dark brown that is only a few shades removed from pitch black. At first it doesn't look like much head will appear, but it gradually bubbles from within the beer until it threatens to eclipse the rim of the glass with it's thick, dark khaki foam.

Aroma - The nose, much like Trillium's own Coffee Pot & Kettle, is strongly focused on the coffee roast. However, it is much more roasty here than in that beer, to the point where it even borders on ashy or burnt. The base beer adds a lot of sweetness to help combat this, including a rich chocolate aroma that mixes with caramel to give this a dessert-like aroma.

Taste - The flavor is very expressive. Each characteristic has its turn on the forefront of the tongue, and they really make the most of it. The coffee leads the way, and like in the nose, is incredibly potent. Some of the acrid notes fall away which is a relief, but there is still a over-roasted quality that I don't particularly enjoy too much. I'm not too enamored with the stout base as well; it's surprisingly sweet and there's even a soy sauce quality at times that isn't very pleasant. I'm surprised since my first few sips were great.

Mouthfeel - The mouthfeel is heavy-bodied with good carbonation. This is a thick, chewy beer that allows the bold flavors to stand out.

Closing Arguments - Overall, I didn't like this beer nearly as much as I was expecting, especially after the gem that Coffee Pot & Kettle was. The coffee is much less smooth than in that beer, and the base beer in Night & Day doesn't lend itself to the coffee flavors. I was not expecting a real sweet stout, but that's what this is. Surprisingly, this probably ranks new the bottom of all the Trillium's I've had, unfortunately. It hurts twice as much since this was one of my most anticipated beers to try from them as well...

Taste is surprisingly sweet - lots of fig, raisin, chocolate mocha, fudge, cherries, charred wood and so much coffee. Way more imbalanced than what I was expecting.

The sweetness is much greater than the roasted-ness or bitterness. Cloying with a fruit-sugary sweet coating that pastes the mouth. Great construction just not my style.