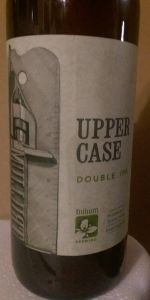 Notes: UPPER CASE has a delicate, dry pilsner malt character with a smooth, soft, doughy mouthfeel from the raw wheat, oily hop resin which all serves as a canvas for this twice dry hopped 9% double IPA. Overripe mango, pineapple and passion fruit aromas leap out as the beer is poured. The impression of tropical fruit also takes the lead in the flavor which is layered further by white wine, pine resin and grapefruit zest. Hopped primarily with Mosaic with supporting roles played by Galaxy, Citra and Columbus.

If you hover your mouth over the glass and just inhale, your mouth instantly starts watering. Super fruity, and then gives way to tons of complex hops flavors that are perfectly balanced. I'm not even a huge IPA fan but this is probably the best beer I've ever had.

Hazy orange with a moderate, fluffy white head and some clingy arms of lace dying to a thin blanket.

On the nose I get some pine, yeast, pear, orange, mango, melon, wheat, butter, and corn.

Chewy and dry, and even a little boozy.

A good beer, but I really dont agree with the current rating.

Bottle. Pours a cloudy, marmalade color. Thin, soupy head. Random, patchy lacing. Whoa. The aroma is absolute hop juice. The Mosaic hops pummel my nose. Some people don't enjoy the almost oniony quality of Mosaic, but I love it. It's also incredibly tropical-fruity. A previous reviewer cited descriptors such as "cilantro and plant stems" and they nailed it. Still, the tropical fruit medley is impressive. I get a ton of guava, mango and pineapple. The flavor explodes once it hits my tongue. Such a concentrated hoppiness. Elixir, extract, nectar. The green onion, cilantro and stem-spice of the Mosaic is in elite form. Galaxy, Citra and Columbus hops also add plenty of hoppy depth. Mango, papaya, pineapple and guava hop flavors. I get signature Citra flavor as well as a passion fruit/moss flavor combo that I equate with Galaxy. It's half tropical and half green. I really love when a hoppy brew can balance between those elements. The malt is signature Trillium dense pastry and sugar. It really props up the lupulin. Body is creamy and fairly full. Bitterness isn't necessarily searing. It lingers but doesn't obliterate. I enjoyed this beer a ton. Up there with Heavy Mettle and Fort Point in my book. It really reminds me of Dinner by Maine Beer. Maybe not for everyone but definitely fits my tastes.

Hands down one of the best Double IPAs ive ever had. I almost drank it through my nose it smelt so good. But finally i took a sip...

Its almost like you can taste every single ingredient that was used in making this beer. And when you put it all together, it creates liquid gold.

Scored after a cold morning of waiting at Trillium's 2nd anniversary release day. Opened and reviewed later that day in a sunny park in a small town in Massachusetts on the way back home to New York.

A - Hazy, soft yellow gold body with a finger and a half of off-white head. Ok retention and nice lace.

S - More acidic and herbal than most of the hop forward Trillium beers I've had. Lemon, cilantro, plant stems, lime zest, and a touch of orange.

O - A really nice soft and sessionable take on the style.

Overall one of the lesser Trilliums that I've had. Upper Case is still a delicious DIPA, but given the fierce competition it faces from its brothers, it just doesn't hold up as well.

Pours hazy, orange-gold in color with 1/4 inch head. Taste is under-ripe mango, light orange juice, and dry white wine. Medium bodied, moderate carbonation, and slightly bitter...Makes for a good IPA by Trillium's standards...great IPA by most standards..I will get this one again, but middle of the pack in Trillium's incredible spectrum of ipas.

This brewery is top notch and this beer is an amazing representation of the quality style they produce. Can't wait to get more soon. Trillium is legit!

I love Trillium and most of their offerings. This beer is just a little too big. The nose is even a little boozy with a touch of citrus. The ABV is all over the tongue and interferes with the hops. Decent DIPA.

Overall - Not as juicy as a lot of Trilliums other offerings but this is fantastic none the less. A top 10 DIPA easy.