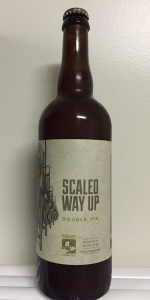 Notes: Scaled Way Up features heavy doses of Galaxy, Mosaic, and Nelson Sauvin in multiple dry hops. Straddling the aromatic line between dank/earthy and sweet/fruity. The flavor profile is jammy and fruit forward, consisting of candied peach and orange notes, and has powerful, sticky resin on the palate. Light in body with a bold bitterness upfront and crisp, bone-dry finish, Scaled Way Up is explosively aromatic.

Completely opaque, straw yellow appearance. The beer was capped by a finger tall crop of crackling, bubbly white froth that quickly dropped to a few frothy swirls atop the body. Perhaps not the nicest looking Trillium beer. A thin collar encircled the liquid.

As amazingly juicy and fruity as all of Trillium's beers are, this one simply took the cake in this department. Just imagine the most intensely fruity and dank hops, multiply that times two, and you get an idea of how amazing this beer smelled. Boatloads of exotic tropical fruits. This was a passionfruit bomb. Huge amount of overripe mango and stewed pineapple. Think ripe, exotic fruits that have been left on the shelf for far too long. Good amount of papaya too. The marijuana notes were also off the hook. This beer smelled like it contained some of the most sticky and dank weed imaginable. Simply outstanding.

The flavor profile was just as hoppy and intense as the nose. Loads of loads of tropical fruits, stone fruits and citrus. Pineapple, passionfruit and mango came through strongest. Slightly tangy. Peach notes appeared in the center. Tons of juicy orange and tangerine as well. The finish was a bit more bitter than your average Trillium beer. White grapefruit notes came through big time. A touch rind-like. Bit of pine sap too. Some pithy bitterness lingered after the swallow.

The mouthfeel was surprisingly light and frothy for the style and contained a crisp, lively, sprightly effervescence. Once the liquid settled on the palate, it turned moderately creamy and smooth.

Scaled Way Up is perhaps Trillium's most potently hoppy beer to date. The nose on this was certainly one of the best I have ever encountered within the style. Due to the excessive amount of hops used in the making of this beer, it supposedly will never be produced again. Hopefully, however, this will not be the case.

Big thanks to @my_knew_craft for splitting this one with me!

L: Typical hazy Trillium, but it still glows with a promise of dank flavors.
S: Probably the best-smelling Trillium I've had; onion, mango, juicy, wet hops.
T: Straight-up tropical juice here. Everything I want and more in an IPA.
F: Perfect carb, makes this incredibly refreshing and gives a nice bite to contrast the tropical juice.
O: My ideal IPA, Trillium kills it yet again. I will be heavily searching this one out when it's made again.

I would rate this one of Trillium's top beers. Tasty Juice bomb DIPA that is surprisingly smooth. I heard that they are making this a one off. Hope that its not true. Outstanding.

A: Pours a hazy pineapple/peach puree color (but not as opaque). Leaves a finger of fairly dense white head that fades quickly to just about nothing.

M: Creamy, juicy feel with some spritz from the medium carbonation. Finishes just a hair dry, along with the sweetness throughout.

O: Delicious, huge flavor and supremely juicy. This beer is a great (extreme) example of what hops can be in a beer. Even with all th.e flavor it still goes down pretty easy, the flavor does last on the tongue a while.

Pours out super hazed pineapple juice like color, thin bright white head recedes quickly, minimal to no lacing. Pretty punchy aromas of grapefruit, lemon, and mango, some pithy and dank green notes as well. On palate is acidic grapefruit and orange juice, pine needles, harsh and almost chalky green herbal quality, hop burn, no real malt to speak of. Mouthfeel is decent but suffers as a result of the chalky and harsh aspects of the flavor profile. Overall this was a decent beer, but not top notch. Had multiple cans and one was compared blind to TH C44 ... no contest at all.