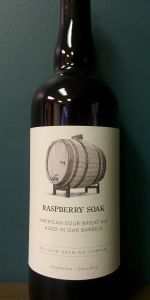 Notes: Soak: our line of sour wheat ales, aged in oak, featuring a variety of single fruit additions. We place a base brew crafted with 60% wheat grist in 600L oak puncheons for 3 months with fermentation duties shared gracefully between lactobacillus and our Native New England mixed culture. Loosely inspired by the cold-maceration process used in winemaking, we blend fruit directly into the barrels to “soak” for enhanced extraction of unique colors, aromatics, and flavors. Delightfully acidic, but not funky, our Soak series is an approachable sequence of wild offerings that we are proud to share. Raspberries bring an assertively tart, yet unsweetened flavor profile, striking crimson hue, and re-enforced tannic structure. Raspberry Soak is dry with undertones of oak and wheat.

Sour warheads up front, oak, lacto, lemon and raspberries. Bit of earthy funkiness the finish. Semi dry, tart and bright. Not bad, but not very complex either.

750 mL bottle. Pours a deep red body. Smells of raspberry, lemon and lactic acidity, with a strong oak aroma. Tastes of strong raspberry and an equally strong sour component. Sourness is green apples with a tannic red wine flavor. Oak. Dry with a wheat aftertaste. Sourness is almost too much. Medium body. Enjoyable, but after a while the sourness becomes taxing.

Unintentionally leaving the dregs behind in the bottle, the body is faintly hazy and bright pastel red with a barely pink-tinged white uniform finger of foam settling to a thin film and creamy collar.

Smell is seedy raspberry, toasted sesame and lemon, indicating plenty of malic acid, and even a sting of acetic acid.

Taste starts quite nicely sour of raspberry and seedy bushberries, with toasty sesame seeds and lemon and even a hint of Gushers, but acetic vinegar harshness pushes in towards swallow, with a little smoky oak.

Quite sour indeed, this has a smooth, soft start with a round fizz that is quickly cut by a bitingly sour, tingly, tongue stinging swallow and semi-dry finish.

Nice 'sour' here. Worth the price tag? Probably not. Hell of a nice beer though.

Pours a beautiful flowing red hue, in between red, maroon, and magenta. First inhalation of aroma and you can feel the acidity coming on. Some raspberries too. Some raspberry up front and a tiny bit of jammyness in the middle. It's very tart and sour. Unrestrained acidity makes this sour a challenge for my teeth enamel. It's aggressively sour to the point where there are some diminishing returns.

This one pours a bright light red, with a small head, and a bit of lacing.

This is definitely not complex, but it certainly smells delicious. I get some clean lactic sourness on the nose, with just a whole boatload of sour raspberries on the nose.

The base wheat beer here must be fairly basic and unobtrusive here, as I don't really get much of it. This is essentially very sour raspberry juice, with a hint of white wine. Trillium's not winning any complexity points with this, but it's still very delicious, and a very lovely expression of one of my favorite fruits.

This is light bodied, crisp and very clean, with a good level of carbonation. It is very drinkable.

This isn't Trillium's best sours, but I would still highly recommend it to people who like raspberries.

A: Bright raspberries, slightly candied with a moderate tartness.

A: Bright magenta color, lightly hazy, with a slightly pink dense white head that has solid rention, light lacing in the glass.

This was one of my last beers at the Firestone Walker Invitational 2017.

I enjoyed the beer, but realistically, I preferred some of the other raspberry offerings that day a little more (Veritas 19, Wicked Weed's raspberry sour, name escapes me). Nonetheless, I would be more than happy to drink this again or purchase it for ~$20.

750 into a fw teku enjoyed with nba playoffs

nose is stellar, great sour base and rich fruit. base comes thru, tiny bit of oak

great flavor, rich fruit, tartness, oak. delicious! reminds me a lot of ffac, but at 5.5 extremely easy to drink. i'm loving it

overall this was excellent! why aren't people flipping out for this beer? absolutely delicious, highly recommended!

Tart, fruit-forward and refreshing. Loving what Trillium is doing with their barrel program, and this is a fine example. I'm not adept enough to speak to the differences or, dare I say it, terroir, that results from the native New England yeast strain their using, but I can say with the utmost confidence that it sings a sweet harmony with these raspberries. I always get a kick out of the way these pink-ish beers look; challenges the notion of what a beer is. Dark pink, light reddish hue with a small head that dissipates as if the fruit-acids are chewing up the bubbles. Aroma is all raspberry and a touch of oak. Sets the mouth watering. Taste is tart raspberry, sweet raspberry, green apple and a tinge of lemon. There's a light oakiness in the background that doesn't detract from the fruit but it adds complexity. Aacidic, for sure, but not heart burn-inducing. Such as easy drinker that begs to be sipped outside in the early summer. Beautiful beer. Finishes with a crisp and snappy pop and an effervescent feel throughout.

Terrific appearance. The hazy, garnet colored body was topped by a loose, soapy looking, finger-tall white head that had a pinkish tinge to it. The crown quickly fell to a bubbly ringlet. Some streaky lacing trickled down the glass after the first few sips.

The aroma was outstanding. Raspberry, raspberry and more raspberry. Freshly puréed raspberries for sure. Tart with lots of natural fruity sweetness. Flawless in its straightforward simplicity.

The flavor was terrific as well but perhaps not quite as raspberry forward. That said, raspberries still dominated. Really fresh, pure and bright. Lots of lemony tartness in the center. Somewhat wheaty. Moderately acidic. Even more tartness, lemon and acidity on the finish. Crisp, dry, snappy and refreshing. Hint of oaky barrel too. Raspberry notes lingered after the swallow.

Nice frothy, lighter bodied mouthfeel. The liquid contained a zippy, rather aggressive effervescence that settled with time. Somewhat fluffy on the palate.

Raspberry Soak is a terrific, raspberry "soaked" wild ale that showcases raspberries like few other beers of this style do. My one knock against this is that perhaps it lacks some complexity. Nevertheless, I would much rather drink a fruit-infused wild ale that clearly tastes like the fruit it contains than one that merely uses fruit as an accent in a (possibly more interesting) base beer.

Bomber poured into a teku glass

Tow finger rose , bubbly foam cap, settles to a few islands. Lots of carbonation on the side of the glass. Pinkish -reddish liquid

Slight carbonation in the mouth

On tap in Canton.

Appears light ruby in the glass with some haze and a thin, white head.

Aromatics are raspberry forward but short of remarkable. A hint of acid-spiked sherry follows through. Medium bodied with a crisp, sharp mouthfeel. Raspberries on the palate with plenty of acid and a trace of vinegar. A light burn on the throat comes along from the acid but the sourness never gets the jowls watering.

Finishes with light funk, medium raspberries, and plenty of acid.

I like the acid level in this beer but I can see how it might be too much for some. It definitely needs more Raspberries though!

Had on tap at Canton. Pours clear, pink in color with minimal head. Taste is fresh raspberries, sour mix and oak-that gives a bit of heft to the body, but never overwhelms. The oak complements the beer, but this is very much a raspberry beer. Best Trillium sour I have had to date. Reminds me a bit of a Flanders Oud Bruin. Well worth seeking out.

One of the best raspberry sours I have had. Not overly acidic sour, but nice and puckering. Lots of fruit. Easy to drink. Had it on tap in Canton, MA.

Poured on tap at the brewery.

The aroma is subtly funky with tons of tart raspberries and a touch of doughy wheat bread. Love it.

The taste follows the nose with wave after wave of fresh raspberries, with some vanilla and mild wheat bread.

The feel is medium-light bodied with solid carbonation. Finishes very dry, with some lingering tartness.

Overall, an absolutely fantastic wild ale. The raspberry flavors are delicious and extremely well balanced. This is the perfect intro to the style, and I definitely hope to get my hands on a bottle soon.

Bottle shared by Jon. Thanks man!

Beautiful pink color. Smells of raspberries picked fresh from the field. No other way to describe the scent and the flavor. The essence of fresh fruit. Super dry finish and a crisp body. Drinks like a lightly fruited tart saison. Very well balanced.

I tried this at the brewery in Canton today; I keep trying wild/sour ales and just do not typically like the style; I liked the Blackberry Soak but LOVED this Raspberry variant; not funky at all, very clean; almost showed me what a wild beer could be for my palate in the same way that French saisons did for that style