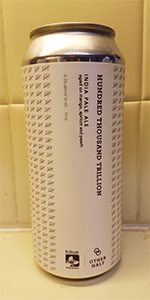 Notes: Brooklyn Stand Up...For the second year in a row we've joined forces with Other Half to bring some collaborative east coast swagger to the IPA game. Hundred Thousand Trillion is next level juicy featuring a powerful combination of aromatic hops and mid-fermentation additions of mangos, peaches & apricots.

Drank from a 16 oz. can purchased at Trillium Brewing Company, Boston, MA
06/24/16
Served in a pint glass

Very cool looking can. Love that minimalist design aesthetic. As for the beer, it poured a cloudy, deep straw yellow with orangey hues in the center of the glass. With an aggressive pour, a flimsy, frothy, bright white crown capped the body but it quickly dissipated. A thin collar encircled the liquid but that too was short lived.

Super juicy, fruity and bright aroma. Tropical fruits came through big time. Loads of mango, papaya, guava and pineapple. There was a dank, weed-like mustiness as well. Some passionfruit was also apparent.

The flavor profile was very similar to the nose. Mango and pineapple dominated. Intensely juicy orange and tangerine notes came through as well. Fairly tangy. Somewhat lemony in the center. The beer finished with some bitter orange peel and white grapefruit notes. As with so many Trillium beers, this one too was amazingly well balanced and ridiculously crushable.

The mouthfeel was the only somewhat ordinary aspect of this beer. It was medium bodied and contained a lively, medium effervescence. The liquid turned frothy and fluffy on the palate.

Trillium's hoppy beers are so incredibly tropical fruit forward that I was expecting an IPA aged on mangos, peaches and apricots to be an over the top juice bomb. Oddly enough, this beer was "merely" as fruity as most of their other hoppy offerings. That said, is this another amazing beer from Boston (and NYC's) hoppy beer gurus.

On the spectrum of the entire beer universe this is quite good. Relative to all Trillium beers, this is good, but not great. Very nice nose, but the taste doesn't quite match that of Trilliums best work. At $20 for a four pack this is perhaps the most expensive canned beer. Does the product live up to the price point? Unfortunately, no. A solid beer nonetheless.

Big and hazy, as expected. Pale straw on the outer edges and a burnt orange in the thicker center. Super spotty lacing.

Straight fruit juice on the nose. Mango, pineapple, guava, peach, apricot, and any other other tropical fruit you can think of is present. Sightly grainy. Light pine and and grass. I sincerely hate echoing stuff from other reviews, but the guy below me is spot on and it honestly changes with every pass, and it's not quite like anything I've experienced.

Assertively hoppy bitterness up front, which caught me off guard. Galaxy is the star, here. Dank and grassy. The fruit (same as the nose, plus maybe a little vinous quality) is towards the middle and on the tail end before being cut off by the returning bitterness. Bready and grainy and slightly alcoholic. Lingering peach and mango for days.

I like this beer a lot. I would give a kidney to have been able to get more than 8 cans. BUT. It's slightly unrefined and aggressively bitter, which in and of itself is not a bad thing if done right, but I feel like the fruit should've been given more of a chance to shine. It's buried under a super solid IPA, which we all know it's possible to achieve these flavors without the actual fruit, so it comes off as a gimmicky catalyst of an increased price.

Pours a luminous yellow-orange with plenty of soapy white head. Very hazy, but not quite as viscous as many of Trillium's other hoppy offerings.

Huge aroma of tropical and stone fruits in the nose. Very apparent from popping the can that peaches and apricots were thrown in mid-fermentation. There's also some discernible greenery in the background but this is largely a juice showcase.

Nose carries over to the taste. HTT is certainly one of the juiciest ipas I've ever had, but it's restrained just well enough that it's not overly sweet and cloying at all. Pleasant soft bitterness and dankness on the backend that keeps this from being alcoholic juicy-juice.

While certainly not as thick as most Trillium hoppy offerings, HTT isn't thin in the slightest. The mouthfeel here is right around the middle of the pack as far as viscosity goes but it's perfectly carbonated and effortlessly smooth. Incredibly quenching beer, and perfect for the rising temperature of the summer.

Overall I was very happy that I was able to snag a fourpack of this, and wish I was able to make it the day before so I could have doubled my catch. Maybe not quite up there with the best of the best of Trillium, but an incredibly solid offering and one that I hope they're able to brew again in the future.

On paper, this is my favorite beer of the summer - in practice, though, it's really lacking; the guys at Trillium regularly get more fruit power from straight hops than they managed from actually adding fruit.

The good: It's really refreshing, with a nice texture, and singing effervescence. Super summery.

The bad: 5 bucks a can at the distillery, muted fruit profile, unusually limp color for the brewery. Nose is murky and while really...Trilliumy..., like the flavor, it's either indistinct, or muddled.

The huh?: weird, shifting bitterness, front to back, hard to count on - a lot of this beer feels confused.

Super disappointed I picked up two 4 packs of this, but this is the first time they've let me down. Feels like a homebrew clone of Whirlpool, actually, without the terrific bite.

A: Bright, golden yellow. Fairly hazy. 5 years ago it would have been hazier than anything else, but nowadays...a typical NE ipa. Looks like pineapple juice! Very enticing.

S: This is one of those times when a bearded John Kimmich just appears in my mind and echoes "I wish I could crawl right into the can". Super juicy, exotic tart fruit like pineapple. Some alcohol burn, a little Treehouse bubblegum...now lots of peach! Every smell I'm picking up something different. There's really no pineapple in this?

T: So right up front there's some exotic sticky galaxy sweetness. If you've had congress st. you know this taste very well. But from here it gets interesting. The fruit plays a supporting role here which is a good thing. I feel like it's making the natural fruit characters of the hop shine and really stand out. Like drinking orange juice after brushing your teeth.(but enjoyable). As the beer warms the fruit is more pronounced but still delicious. A little more peach now then before...first sips were more mango... Just waves and waves of hops and fruit.

O: This is just great. at 20 bucks a 4 pack would still buy a case. I was a bit nervous about paying for these as I'm not typically a fan of fruited beers.(but c'mon, it's Trillium in a can!). I think Trillium/OH were very wise in their fruit choices. I never taste just peach, I never taste just mango, and I never taste just apricot. I taste juicy bright hops that already have those characteristics, just amped up. What a fun beer to drink. Each sip provides something new.

Nice job guys! It's been a while but I think I like this more than last year's collaboration

Fresh pint can. It pours a hazy/cloudy medium yellow color with a fresh white head. Light smells of mango and peach some caramel malts and grass. Taste is great Mango and apricot mix with citrus and dank garden hop a touch of bitterness is smoothed out with sweet malts. Lower carbonation a touch of bitternes and nice tropical malts make up the mouth feel a touch of white grape and a dry finish. Another superb NE IPA.

16 oz. can. Hazy pale orange. Smells of mango and stone fruits. Some pale malt. Tastes of strong fruit up front, but very dry. Mango and stone fruit again. Dries out quickly and the fruit flavor becomes astringent. A little booze. Medium body. Medium carbonation. It's tasty, though I think I'd take a standard Trillium IPA over this fruited business.

L - Hazy, murky light orange with a finger of white head that dissipates quicly
S - So much fruit aroma...mango and peach are prevalent and it smells amazing
T - This is like drinking straight juice...mango sweetness with hints of peach dominate and work perfectly with the galaxy and citra hops. A subtle hop bitterness creeps in at the end.
F - Full bodied for an IPA. Med carbonation and supremely refreshing!
O - Absolutely phenomenal. One of my favorite collabs and quite possibly, one of my favorite IPA's right now. I can't think of something that had this much fruit aspect to it.