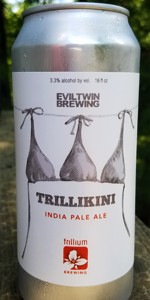 Notes: We teamed up with our friends at Evil Twin to brew Trillikini; our first beer available in cans and the ultimate summer crusher perfect for those endless days at the beach or timeless backyard BBQ's. Don't let the low ABV fool you, this hazy blonde IPA is loaded with hop-driven flavors of candied peach, grapefruit and lemon zest complimented by fluffy oats and a rustic graininess. Clean and crisp with firm, thirst-quenching bitterness, Trillikini is destined for your icy cooler.

Thanks to TATURBO for this can!

Appearance: Opaque and turbid beer. Pale golden yellow body. Fluffy bone white head that stacks up to two fingers tall. Sticky lacing left on the side of the glass.

Smell: Orange, tropical fruits, pineapple, and a hint of pine all found in the aroma of the beers hop profile.

Taste: Light bitterness and lots of juicy hops. Light sweet tangerine citrusy profile with a little kick of pine needles and grapefruit imparting a hint of bitterness. Melon rind, earthy, grassy, and a hint of overripe tropical fruits. Lightly dirty and dank hops. Light grainy malts. Everything is balanced and nothing is overpowering the other flavors. Lots of complexity here, but this is not necessarily a flavor bomb of hops either. Just right for a session IPA; more flavor than most session IPA's, but not over the top with hops either.

Overall: A session IPA from Trillium that packs a ton of hop flavor into minuscule 3.3% abv. This beer is just brilliant and it has totally obliterated every single session IPA on the market. Session IPA's will never be the same if breweries all start brewing their session IPA's like this... Trillium is such an innovator of hoppy beers. How can they make some many different hoppy beers and people still want to drink the newest latest trillium beer? I have no idea, but you can count me in as another person in that crowd.

Pours a hazy, near murky pale orange in color with a finger of off white head, not particularly impressive. Lots of Ttillium character with tons of tropical fruits. On my first can the hops were all I could taste, the second can had a bit more complexity, I could be imagining it but I got some very faint sour notes. Light body and solid carbonation. Overall very easy drinking and a perfect beach beer, it has just enough flavor to be interesting but the light body and low ABV mean you can drink it all day. It definitely lacks the sour character of the original Bilini Beer but it does add the hoppy goodness that Trillium is know for.

Cloudy, glowing orangey-yellow appearance. With an aggressive pour, a tiny, frothy, bone white crown rose above the body but it quickly dissolved. A thin, lasting halo encircled the liquid.

At 3.3% ABV, I had fairly low expectations on the intensity of the nose and the flavor profile, but neither disappointed. The aroma was actually outstanding. Super dank and fruity. Weed-like notes came through big time. Loads of musty passionfruit, mango, guava and papaya. Tropical fruits galore. Bit of orange and tangerine. Classic Trillium.

The flavor was also terrific but not quite as smooth as the nose. Citrus notes dominated. Loads of juicy orange and tangerine. Fairly tangy. Lemony in the center. White grapefruit came through on the back end and in the finish, turning more rind-like as the beer moved along the palate. For a hoppy Trillium beer, this was fairly bitter, but that probably has something to do with the amount of malt needed to brew something so hoppy AND so low in alcohol.

The mouthfeel was the only "smaller" aspect of this beer, yet it was still rather full considering the ABV. Lighter bodied for a typical IPA, but perhaps appropriate for a session IPA. Frothy and fluffy on the palate. The liquid contained a fine, crisp, zippy effervescence.

Trillium kills it once again with this beer. While not one of their most amazing offerings, this is truly perfection when it comes to session IPAs. How they managed to make this so hoppy yet so balanced and drinkable is truly mesmerizing.

Thanks to judkinst for the can while camping up in NH for July 4th weekend! Enjoyed on a public beach on Lake Winnisquam since public sand is hard to come by on Lake Winnipesaukee. Smells, drinks, and goes down like a hoppy Blonde Ale. Fantastic stuff, as expected.

A pour from a 16 oz. can.
Appearance: Pale golden body with a white head that has decent retention.
Flavor: Relatively mild bitterness.
Aroma: Pleasing fruity-hoppy aroma

16 oz. can. Very pale orange. Smells of white pepper, garlic, orange, and cracker malt. Tastes a little less exciting. Orange with no sweetness. A hint of garlic and pepper. Light cracker malt and faint bitterness. Very light. Probably shouldn't have had this so late in the tasting, but it's nice.

A - Pours an opaque orange with minimal white head that dissipates quick. This looks like many other NE hazy IPAs.
S - I can't believe a session has this much aroma. Fruity and tropical hops dominate in the aroma. Smells fantastic for a session.
T - Fruity/tropical hops up front...pineapple, mango and papaya followed by a bready malt flavor. So delicious.
M - Nice carb, super refreshing, doesn't drink like a session to me...more like a Fort Point Pale.
O - I can't believe this is a session. Hands down the best session I've ever had. Super flavorful and refreshing. Could easily crush a bunch of these and enjoy every last sip!

Can. Pours very hazy and a dim orange. High in aromatic hoppiness; more than most. It suffers the same outcome as most all Session IPAs I have had. The hops fall off quickly and you are left with a dry, bland maltiness that isn't exactly unpleasant but it is sort of a letdown after the first half of the flavor. Very lightly bitter. Light bodied.