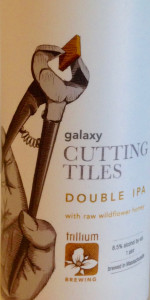 Notes: Cutting Tiles is an exploratory series of double IPA's featuring a range of aromatic single hop varietals brewed with raw wildflower honey. This familiar first version, formally known as Artaic, is dosed with 100% Galaxy in all kettle, whirlpool and two massive dry hop additions. The local wildflower honey keeps the body light and drinkable but provides a floral, earthy backbone. Juicy, candied peach and nectarine up front backed up with a nuanced white wine on the nose that continues straight through in the flavor profile. Pillowy soft mouthfeel, with a restrained bitterness on the finish. New variants to follow!

A: Pours a hazy orange/gold with minimal head. Lack of carbonation is apparent from the pour. It's a bit darker in the glass compared to other Trillium offerings, but it showcases that thick and turbid yet vibrant look that is so damn appealing.

S: Typical Galaxy notes on the nose. Pineapple, peach, tangerine. Bits of earthy, grassy dankness lie beneath the fruits. The nose is there, but it's definitely muted compared to what I've come to expect from Trillium IPAs. I think this is likely due to the lack of carbonation on this beer, which, while contributing positively to the mouthfeel, definitely makes you work a bit harder to pull out those tropical aromas (but trust me, they're in there!).

T: Heavy citrus and tons of passionfruit on the taste. Orange, tangerine, and spicy mango up front. Followed closely by ripe peach and nectarine. Then, a sweet vanilla note appears to complement the citrus perfectly. As others have noted, this combination is reminiscent of an orange creamsicle. It's likely that the addition of honey is responsibly for this flavor, which provides sweetness without being at all cloying. It's very different from the sweetness I get with overly malty DIPAs... It tastes like vanilla-infused confectioner's sugar rubbed on top of ripe tropical fruits. Finishes on this sugary citrus cream note and just a touch of piney bitterness.

M: Really smooth feel on this one with less bitterness than I get on other Trillium beers. It's slightly under-carbonated, but in this case, that quality works with the flavor profile and creaminess of the mouthfeel. With medium minus bitterness and a clean, dry finish, GCT goes down way too easily for its ABV... Slight hints of heat as it warms are barely suggestive of the alcohol content.

O: While I often find that many of the Trillium IPAs I've had--albeit--only the Street series and Fort Point variants--taste very similar, this one really stands out from the rest. It has a fuller mouthfeel, smoother finish, and a crazy citrus-cream flavor that complements the initial burst of tropical fruitiness damn near perfectly. It reminds me of Tired Hands' Mango Double Milkshake, but without the intensity of the lactose and Mosaic DDH additions. Overall, GCT is super flavorful yet incredibly balanced, making it dangerously drinkable for an 8.5% beer. With their raw wildflower honey and Galaxy hops, it seems like Trillium has found a winning combination here for sure.

Pounder can that was filled...no shit, 3 friggen days prior to consumption/this review. Thank you Dan for gifting me with such a freshy. The brew appears a very chalky looking golden color with white cap.

The aroma does not disappoint, wow. It smells like galaxy pellets crushed up in your hands. Its so hoppy and pleasant smelling its like mint tea one moment, than grassy the next. As it breathes, a ton of tropical pineapple emerges filling the nose. This is up there with some of the finest smelling galaxy ipas I have ever had.

Taste is grassy hops with a touch of husky grain. Slight fruity pulp and tropical to citrus hop flavors with a little weedy feel. There is again almost a minty feel to this before the pithy bitterness takes hold driving this almost into grapefruit territory.

This is light to medium in body with almost a chalk hop resin feel. It has a freaking fantastic nose and depth of flavor to back it up. A poundable brew and honestly, how spoiled am I to get to try this within 72 hours of it being packaged. This far and away exceeds my prior trillium experiences and damnit of it doesnt make me a believer in the hype.

Pretty badly undercarbonated, ruins what would be a pretty decent beer. Still don't think it'd be better than mosiac even if everything else alright and definitely not the treehouse green killer some people have made it out to be.

Poured from the can into a snifter.
Pours a turbid medium blonde with one finger of head.
Aromas are huge deep dank galaxy hops.
Flavors were amazing. Candied mango, DANK, hops.
Mouthfeel was thick and chewy.
Overall, an amazing rep of galaxy hops.

One of the best IPAs I’ve had. Would put this just below Perm 32 for me. I remember having Mosaic Cutting Tiles last year, and thought it was a mess. The new fermentation for these beers not only makes the hop flavors pop, but also smooths them out and they look great in the glass. Really, this is possibly the best looking IPA I’ve had. It’s looks like a puree of pineapples and oranges, and has a thick, sticky head. The taste is like 32, but a little more bite that I really liked. They’re knocking these beers out of the park lately.

This beer is awesome. Poured from can into a tall tulip. Hazy dirty orange that looks like they poured orange juice and white grapefruit juice together. Two finger head and some lace. Nice aromas of pineapple and other tropical fruits, with some pine and cannabis. Taste is straight up delicious...same fruitiness as in the nose, with a slight cactus/aloe flavor, and a very soft, very slight finishing bitterness. Mouth feel is perfect for the style...medium body, creamy and fairly sweet, with just enough carbonation to keep it refreshing to the end. Overall, another great Trillium DIPA.

Beautiful beer! Dark Orange, the Slight smell of Citrus, Taste of dank orange juice, Perfect mouthfeel and carbonation. Overall, beers don't get much better than this.

Pours an opaque soft pale yellow in the glass with a finger of dense white head. Huge pungent citrus aromas upon cracking open the can; followed by a light earthiness, fresh pineapple, fresh apricot, summer flowers, honey and a light wheat cracker. Taste matches the nose, think of a citrus marmalade w/ honey on a wheat cracker. At the end of the taste I get a little bit of ruby grapefruit pith and pine resin. Fantastic! I'm a big fan of honey added to IPAs and this really hits the spot. If you've had Buzz from Night Shift, this is that brews bigger sibling with a PhD. Super refined and smooth. Mouthfeel is a smooth medium with a little bit of prickly carbonation, low dryness but a medium- bitter kick at the very end of the sip. Not the stereotypical fruit smoothie, it's got both a detectable honey sweetness and ruby grapefruit bitter kick. I wish I picked up more of these cans during this batch!