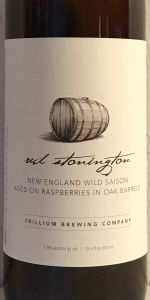 Notes: Our signature New England Wild Saison, Red Stonington, features Valley Malt and is aged in oak barrels for more than a year. The fermentation is carried out by our native New England mixed culture, collected from grape skins at Saltwater Farm vineyard in Stonington, CT where JC & Esther Tetreault were married. The nose bursts with aromas of fresh raspberry, cherry pit, and an earthy funk. Red Stonington begins tart and mellows into a complex array of nutty malt and fermentation driven funk. A bone dry finish makes this beer immensely refreshing.

Attractive appearance. The almost clear, garnet colored body was topped by a frothy, finger-tall, light tan crown that quickly dropped to a thin collar. A few droplets of lacing trickled down the glass.

The flavor profile was also quite raspberry forward but not to the extent of the nose. Tart (perhaps underripe) raspberries were apparent. Loads of sourness and acidity. Lemony in the center. Oaky and dry on the back end. More raspberry too. The beer’s tartness and acidity became even more intense on the finish.

Nice fluffy, medium bodied mouthfeel. The liquid contained a fine, fairly aggressive effervescence that turned frothy on the palate. The beer’s acidity was intense and, by the session’s end, I felt like the enamel was being stripped from my teeth.

Trillium’s sour beer offerings are typically far too tart and acidic for my liking, and the fruited ones often seem to lack much fruit character. While Red Stonington was also extremely sour, the fruit (raspberry) notes were definitely quite present. If only Trillium would now offer their sour beers in smaller format (less expensive) bottles, I would be much more likely to pull the trigger on them.

L -- Pours a murky deep nectarine hued body with a one-finger off-white head produced with moderate pour. Some retention and minimal lacing, but that might be because the bottle is pretty cold
S -- Raspberry, quince, barnyard and vinous funk, pomegranate, lime, cranberry, wild blueberry, wheat, and a hint of sulfur
T -- Immediate explosion of sour raspberry across the palate. Also getting sour apple, lime, lemon, cranberry, oak, bready malts, white wine. As past reviewers have noted, there's a distinct jammy quality to the raspberry, although it's hardly sweet.
F -- The sourness is pretty overwhelming, although there's enough raspberry character shining through to give it merit. Medium mouthfeel, medium+ carb.
O -- This brew is just packed full of wild yeast. One of the most intensely sour wilds I've had. Not worth the $22/750 ml although still an enjoyable drink
cr

Nose is insanely aromatic on this one. Huge raspberry puree and seed notes. Deep and juicy with a nicely balanced tart and sweetness. Excellent. Beer opens intensely tart and seedy. Notes of vinegar, raspberry puree and pure acidity. Super sour throughout. Body is light to medium with moderate to ample carbonation. Foamy on the palate and goes down aggressive and sparkling.

This is a little too much for me. Really fruit forward but this is like vinegar in a glass.

Overall, this is a great offering from Trillium. My experience is limited with more sour beers so you might have a different experience. I had it paired with a home made pasta dinner. While I enjoyed this beer, when 25oz costs $22, I could find things I enjoy more for less money.

Look - due to the heavy raspberry content, the beer is very cloudy and almost brown in color. It's appropriate and in line with what the beer should look like, it's just not super attractive.

Smell - fantastic smell of raspberry, almost like you opened a jar of jam.

Taste - compared to the smell, the raspberry is toned down a little, not a heavy "barnyard" flavor that's typical of a saison/farmhouse style

Feel - Very sour but not over the top, dry finish.

*The most recent release was 2 bottles per person and this edit is after I drank the second bottle a day later. I definitely enjoyed this more at a slightly warmer temp rather than straight from the fridge. That's no exact measurement but I would leave it on the counter for 30-45 minutes to warm it up a little before drinking.


Red Stonington from Trillium Brewing Company
Beer rating: 94 out of 100 with 63 ratings