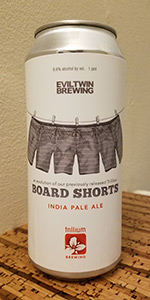 Notes: Grab your sunscreen and ride the waves with our latest project with Evil Twin! We took the base recipe of our first collaboration, Trillikini, and ramped it up with a higher gravity malt bill and a massive dry hop of Citra/Amarillo/Mosaic! Board Shorts IPA is loaded with hop-driven flavors of grapefruit pith and bright stonefruit. The soft mouthfeel is complimented by fluffy oats and a dry, rustic graininess. Clean and crisp with firm, balanced bitterness. No lifeguards on duty!

The very epitome of a hazy New England style IPA. Completely opaque, except for thin portions of the stem, where faint shadows are all that make it through the pulpy, orange-yellow body. Big wispy head, good retention, and nice lines of lacing.

Dank and peppery on the nose; I would have guessed (incorrectly) it has Galaxy hops. Certainly not a beer that hides its hoppiness. Fruit is provided by pineapple, papaya, and mandarin orange; sweet pale malt and wildflower honey round out the profile.

Flavor is a bit more restrained initially, likely owing to the single-IPA territory ABV. Up front, I daresay it's even a touch watery, with just a touch of grapefruit peel and resin coming through. The second half, though, brings strong herbal dank notes, peppery spice, and sweet tropical fruit juice. I imagine a papaya-orange blend would taste fairly similar.

Feel is lively and easy; green oily hops cling to the palate on the finish, leaving behind an impression of grapefruit peel and parsley.

A: beer comes in a full-on hazy medium gold color with about a finger and half of fluffy off-white head that sticks around for a while. Little to no transparency on this one--about as turbid as any other Trillium brew (excluding that yeast sample that was Headroom). Grapefruit juice.

S: Really nice grapefruit-forward aroma with supporting notes of white peach, orange, and tangerine. It's super fruity and juicy on the nose, with just the tiniest floral/piney earthiness underlying. I also get a bit of bready sweetness, but not much considering the ABV. Overall, aroma isn't explosive, which I suppose is due to the fact that this is 7(?) weeks old. But given how nice the aromatic profile is, I can't imagine what this smelled like fresh...

T: Follows the nose... Tons of ruby red grapefruit juice mixed with a nice pop of white peach and some orange/tangerine/general citrus. Taste is bigger than the nose--this packs the flavor intensity of a 7+% beer for sure. Mid-palate, I get some crackery malt that comes out a bit more than usual (but is delicious nonetheless). Backend is dominated by a big floral note (vaguely piney, flowery) and a lingering bitter grapefruit pithiness that sits on the tongue.

M: The best part of this beer... Mouthfeel is spot-on, up there with the best that Trill has put out. Incredible carbonation coats the mouth, but super gently. Not quite at that Tree House or Grimm level of pillowy creaminess, but damn close. Carbonation makes it feel like a bigger beer, but the weight of it on the tongue reminds you that this is scarily drinkable. Medium bitterness on the finish cleans up the taste and lingers for a while, leaving you very ready for the next sip.

O: I wish I had this beer fresher. It's drinking very well right now, still packing a ton of flavor and an incredible mouthfeel. But the hop aromatics and--to an extent--flavors have definitely fallen off a bit. The flavor profile on this is great (though I feel it was much more tropical and less grapefruit-forward a few weeks ago), and it's crazy drinkable. Can't wait for the DIPA version of this series....

One of my favorite IPAs that I've encountered from Trillium. Explodes peach, mango, papaya, fresh fleshy tropical fruit upfront, but also balanced by a medium bitterness on the finish.

This beer is bitter when trillium is normally soft. Tropical. Green. Earthy. A bit sticky.

This is decent but I like trillville solo better.

16 oz can. Hazy orange body. Smells citrusy. A little resiny. A little bit of a mineral aroma. Tastes of oranges and pine hops. Cracker and toasty malt profile. Something like the oats in the back end. Almost sharp in the finish. Moderate bitterness. Light body. Nice.

thank you robbie for generously sharing the freshie tick. evil twin and trillium and collaborations in general I find to be the parts are better than the sum. this is no exception. not an utter failure, kind of like an evil twin ipa w the trillium treatment. great by most standards but compared to trillium's core lineup, this is a nice to try.

16 oz can was poured into a pint glass.

Appearance: A one finger head was poured that reduced to a thin layer. It is a slightly hazy orange yellow color. Spotty lacing down the glass as the beer was drank.

Overall: On a cold December night, the thought of 5his beer makes me think.of warm and sunny weather. Tasty and delicious.