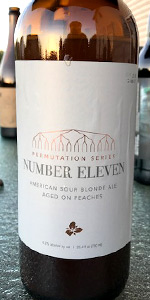 Notes: Permutation is our experimental series of small batch offerings, showcasing the unique visions and innovative concepts developed by our production crew.

For this edition we used our Native New England Mixed Culture to brew a sour blonde ale conditioned in oak foeders for 9 months before being aged on a pile of peaches, over 2 Lbs per gallon. Permutation Series: Number Eleven is a cloudy golden color, opaque in appearance with an off-white head and lacing. Powerful aromas of cobbler & juicy overripe peach are balanced by subtle undertones of spicy peppercorn that warms the senses. First tastes conjure stone fruits with moderate to heavy acidity, followed by ripe, juicy peaches, a light lingering funk, and pithy citrus. A light mouthfeel underpinned by soft tannic structure, moderate carbonation, and 6.2% ABV make Number Eleven a perfect summer sour.

One of the better peach sours I've had. The nose has a real cheesy funk to it which overshadows the fruit but the flavor is all fresh peach with a palatable tartness level.

Ripe, tart, crisp. The back corner of my mouth is tingling just thinking about this beer. Dang it's tart! It's the defining characteristic of this beer, with the sheer amount of peaches coming a close second. And there's an insane amount of peaches in here which says something about the Lactobacillus in the local-yeast culture being used. Pours a hazy apricot out of the bottle with a faint head. Looks like freshly squeezed peach juice without the flesh. Aroma is all peach - ripe, overripe and tart. Delightful - you really get the sensation of holding a peach in front of your nose. Taste is overripe peach, nectarine and pith. The malt is there but it's covered in peaches. Like a giant peach cobbler with barley any cobbler. Very acidic and teeth-clatteringly tart, this beer delivers like a muscled-up Berliner Weiss. Crisp and refreshing despite it all. Definitely share the bottle.

Pours a hazy golden. No head retention. Some peach, but also some underlying poopy, funky aroma. You know what kind of sour funk you're getting into from the aroma. Very tart, some nice juicy peach on the finish. It's a tad bit on the acidic side, not super puckering, but definitely moderate puckering. Overall, I like it, but my teeth are starting to hurt.

The nose was quite peachy and bright. Fairly clean overall. Wheaty and tart. Somewhat lemony. Musty peach notes really came forth as the beer sat. Touch of funkiness. Impressive.

While slightly more complex than the nose, the flavor profile was definitely less peach forward. Wheaty on the front end. Lemon notes came through strong. Tart but not overly so. Some peach appeared in the center. Slight mustiness. More lemon and acidity in the finish. The sourness lingered long after the swallow.

Nice bubbly, spritzy mouthfeel. Medium-light bodied. Crisp and lively on the palate. Appropriate for the style.

Calling this beer an "American blonde ale" is pretty ridiculous, as it drank much like a fruited wild ale. As with many beers in Trillium's "Soak" series, this was crisp, clean and contained a noticeable - yet not overbearing - fruitiness. All in all, a very solid overall effort from a brewery who is consistently demonstrating that they can make terrific non-hoppy beers too.

Insanely tart. Add a ton of sour patch kid sugar into a peach and this is what you would get. Doesn't finish too dry. Peach flavor really stands out. Extremely satisfied.

Poured out as a golden color with a thin white head on top. The smell of the beer has a very nice tart peach aroma to it with funk in there too. The taste is tart, some sweet peach notes in there as well. The feel is light bodied. Overall it's a very nice wild ale.

Had on tap. Pours hazy, orange-yellow in color with 1/4 inch head. Taste is big sour mix and oak. Peach and peach juice comes through lightly as the beer warms. The peach taste here reminds me of the peach juice in the Dole cups I used to get as a kid. Beer comes across as really sour, light bodied with prickly carbonation. I like the sourness level, but I really wish the fruit was more prominent. That said, this is a tasty sour that I would get again.