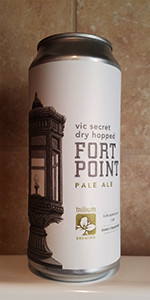 Pours a turbid straw yellow with hues of orange. Thick tight white foam head. Nose is subdued citrus, fresh baked bread and ripe melon. Taste is a citrus burst. Notes of grapefruit and lemon zest. Nice biscuity layer to break up the citrus that eventually gets smoothed out by notes of melon, honey and tea. Medium to full body and super creamy smooth mouthfeel.

Smell is not crazy juicy but tropical and taste of honey. This is a good tasting beer and one of the thinner feeling IPAs I have had from trillium. This is good as it won’t fill your belly up but not my favorite beer I have had from this phenomenal brewery.

Pours cloudy gold with a large, creamy head. Nice retention a thick ropes of lacing. Pithy citrus with earthy undertones in the nose. Grapefruit with lemon zest and peppercorns. Medium bodied with a creamy, almost fluffy mouthfeel. Zesty citrus on the palate with zero malt and a solid bitterness. Grapefruit and lemon pith abound. Finishes with lingering citrus pith.

Not the most aromatic Fort Point version but the Vic Secret is a nice change of pace.

Another one courtesy of the beer jesus himself, daddy robbie!!! thanks so much for the tick, you know how I love me them fresh ticks and you know how I love them vic secret ipas!!! win win win win...as for the beer itself, a really wonderfully executed vic secret beer. there is definitely the earthiness that I love about the hop and it is masterfully complimented with the sweetness of the fort point base. really washed over in vic secret in such a huge way it makes a man ponder his existence for a moment before gazing off into the sunset smiling.

M - Good carb, maybe a tad too bitter? Think I would have liked a slightly more rounded finish

A: Thick and hazy orange with a rich 1/1/2" white head and never ending lacing.
S: Nose is full citrus, floral, bread, and malt.
T: Follows the nose, very citrus up front with a lot of bitterness off the grapefruit. Getting a nice sweetness from the malt with dryness on the finish.
M: Medium feel and dry on the end.
O: I really enjoyed the beer but it was a little to dry/bitter, if that was toned down a little would have been way happier.

F - Medium with creamy body and no alcohol

Like so many other beers I like the original better than the variant. Still an excellent beer but just a step below the original and I think that the lime flavor is the culprit.

Wasn't much of a fan of the first can, but the second is somehow better. Dank, fruity nose, nice hazy orange pour. That being said, still haven't had any bad Trillium

Poured from a 16oz can into a US tumbler pint glass.

A: The beer is a cloudy deep gold color, with a short off-white head that fades slowly and leaves a thin lace on the glass.

T: The taste starts out sweet with a strong fruity and juicy citrus sweetness. Then a strong floral and dank hops bitterness comes in. The malt character is hearty but not too heavy and brings a very good balance. The after-taste is slightly hoppy and slightly sweet.

O: Very tasty, goes down quite easily, not too filling, decent kick, very good representation of style, this is an excellent beer to pound down for a long time, just like its counterparts.

Drank from a 1 pint can purchased at Trillium Brewing Company, Canton, MA
Canned on 10/18/17
Served in a tulip

Completely opaque, yellow ochre appearance. The body was capped by a finger-tall, frothy, off white crown that quickly fell to a thin collar. Streaky lacing stuck along the glass.

The nose was amazingly hoppy and pure. Loads of dank cannabis and bright tropical fruitiness. Fresh bud definitely came to mind. Strong passionfruit and papaya notes. Some peach as well. A subtle chalky yeastiness was also detectable. Lime and lemon notes were apparent and they intensified as the beer warmed. Some grapefruit came through as well.

Like the nose, the flavor profile was super hoppy and bright. Citrus notes dominated. Loads of lemon and lime. Good amount of tangy tangerine. Tart and wheaty in the center. Grapefruit appeared on the back end and in the finish. Touch of pithy bitterness but very well balanced overall.

Nice, creamy, fluffy mouthfeel. Fuller bodied for the style. The liquid contained a medium bubbled, greater-than-average effervescence that frothed up nicely on the palate.

Nearly every beer in Trillium’s Fort Point series has been a winner in my book, and this Vic Secret hop variant is no exception. The hops lent the beer some intense lemon and lime notes, and a touch of grapefruit-like pith and bitterness. All in all, a terrific offering and one that hopefully enters Trillium’s regular rotating lineup.

This one pours a fairly hazy orange, with a small head, and lots of lacing.

This smells like sharp and biting grapefruit, with some candied lime, lemon, and orange.

Vic Secret hops are pretty sweet- this has a really nice hop character to it- lemon, lime, grapefruit, and orange, with a sharp bitterness on the finish. I don't get much in the way of malt character. The Fort Point beers are some of the absolute best pale ales in the game.

This is light bodied, slightly creamy, and crisp and clean, with a good level of carbonation.

This is a really nice new FP variant.

Poured from a 16oz can into a pint glass. Thanks Steve for the hookup.

Heavy grapefruit, lemon, lime hops on the nose. On the tongue is subdued citrus with a lightly sweet malty aftertaste. Mouthfeel is easy, medium carb with medium body.