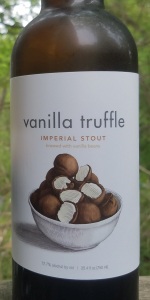 We teamed up with Miami's J. Wakefield Brewing to create another dessert-inspired stout! For this edition we simplified things and go to the root of all tasty treats. Vanilla Truffle is an imperial stout with Madagascar bourbon vanilla beans.

Vanilla Truffle announces itself with a big aroma of brownie batter and charred marshmallows. The palate provides deep vanilla, pot du crème flavor with subtle notes of toffee and caramel. A full, rich mouthfeel leaves a coating on the glass and lingering, satisfying sweetness.

The vanilla is still there although maybe dropped off a little. It's mostly the base stout that is a little lacking in intrigue, imo. Sweet and graham-crackery

Poured into a pint glass via bottle

color is a rich dark brown with espresso colored foam

taste follows the nose nicely with the chocolate marshmalloy fudge at the forefront. the vanilla complements very well

mouthfeel is very thick and chewy.

this reminds me very much of a decadent chocolate shake..very well done trillium!

Decadence at its finest. Doesn't retain much lacing, if any. Vanilla hits you on the nose intermediately. Flavor follows suit with the description. One of my favorite stouts, somehow I drank the whole 750 it was that good. Pure vanilla chocolate milkshake in alcoholic form

On tap. Color is a murky brown. Tan head that fades.

Full bodied. Thick and syrupy. Similar to other trill stouts.

S - Some booze and overall sweetness. Molasses and a touch of bourbon and roast. Barely any vanilla.

T - Follows the nose. Some good roast and coffee. Goes back to some molasses. Bourbon is subtle from the beans. Where's the vanilla?

F - Thick and velvety. No booze.

O - Great as an imperial stout, but I got no vanilla.

Slick oil black little too no head smell is pure vanilla upfront . Taste is sweet on sweet the vanilla does shine but too one note left looking for something else to balance it out.

Too sweet for me - please move along down the line for a review that considers this special sauce from a more nuanced perspective. After so many beers over time, my palate has become quite finicky and some, not all, pastry stouts often show themselves to be overwhelmingly sweet, and this is what this beer is - a sweet treat.

Enjoyed on draft at the taproom. Viscous black pour with a thin khaki cap that fades to a handful of small bubbles.

Mouthfeel is thick, hearty and cloying. Not sure when the "bourbon" in the Madagascar bourbon vanilla beans comes to the fore - the overall brew was too sweet for me to pinpoint the nuance.

Pours a deep dark brown, with tan head. That head isn't retained for long. Vanilla and chocolate on the nose. This is thicc (as the kids say), chocolate and vanilla with enough viscousness. It's very good and it's between this and Macaroon for my favorite stout collab.

Opaque black appearance. Minimal foam head. Loads of vanilla on the front, and the truffle flavor definitely comes out toward the back as it warms. Sweet and rich. Good mouthfeel. This is a dessert beer all the way.

This was an ass-kicker, in a very good way. The 12.7% ABV definitely makes its presence known right up front, but you also get some sweetness from the vanilla along with the full body of the stout. I'm a big fan of beers like this, and this one held up just fine to some of the ones I get back home. Would gladly buy this if I ever saw it on a shelf in my part of the country.

Near pitch black appearance. Slightly thin looking in the glass. The body was capped by a small, frothy, khaki colored crown that dropped to a fine but resilient collar. Tiny droplets of lacing stuck along the glass.

The aroma was solid but nothing to get really excited over. Roasty and sweet. Caramel notes were apparent. Some dark chocolate came through as well. Touch of vanilla too. The nose intensified as the beer sat. Chocolate fudge notes came forth, as did more vanilla.

The flavor was similar to the nose and fairly boozy from the get go. Big roasted malt notes. Some caramel as well. There was a subtle vanilla presence. Like in the nose, the vanilla was far more understated than I anticipated. More roast and booze on the back end and in the finish. As the beer warmed, the chocolate notes intensified.

Outstanding mouthfeel. Thinner bodied for the style but amazingly creamy and plush. The liquid contained a fine, frothy, tongue blanketing effervescence that turned super smooth and supple. This was definitely the most impressive aspect of the beer.

Trillium / J. Wakefield’s Vanilla Truffle collab is a solid pastry stout, but it is definitely not in the same league as many other similar offerings, such as Affogato and Tiramisu. Both the vanilla and the chocolate notes in this beer could have been kicked up a few notches. Perhaps this might work better if/when it is put into bourbon barrels.

I am loving these big pastry stouts from these two breweries. Pours black as night with a nice 1 finger head that dissipates quickly. Typical high alcohol stout boozy smell on the nose, but not much else. Little bit of chocolate, but disappointed there wasn’t more. Taste makes up for the nose though. I’m a sucker for coffee stouts but I like the use of just vanilla here. Vanilla, brownie batter (as advertised), dark fruits, cookies?, and an overall sweetness contribute to what you’d expect from a big, sweet stout. The feel is great, but wanted a little more heft. Overall, another great entry in this like from them. I’d put it behind Tiramisu & Affogato, but not far. Hoping for a BBA version of this.

On tap at canton...short and sweet review...one of the better trill stouts put out. Rich, sweet, TONS of vanilla. Least amount of bitterness. Mild roast & chocolate. This one was excellent. Worth seeking!

Pours a very dark color. Smells of vanilla with a lingering bourbon scent in the background. It overwhelms the palate with those same vanilla scents as the tatse is an explosion of vanilla beans with a slightly unexpected bourbon like finish. A solid stout from Trillium.

Pours a thin dark brown with a one finger, very quickly dissipating light brown head -- hardly any discernible carbonation after the first minute or two. Smells of sweet vanilla, bourbon, and chocolate. Taste is sweet dessert in a glass. Tongue is immediately coated in thick chocolate paint, vanilla flavor definitely present, roasty and smooth. Booze comes in a bit as it warms up (as it should at nearly 13%). Mouthfeel is great, silky and rich. Looks poor, smells good, tastes and feels great.
Other than appearance, this is a knock-out in the world of dessert stouts.

The beer pours Black with a thin khaki head that recedes immediately. It has low carbonation. The beer smells of vanilla beans, marshmallows, white chocolate, and brownie batter. It tastes of vanilla beans, marshmallows, white chcolate, brownie batter, and honey. The feel is very light, pretty thin. Another good stout from trillium.