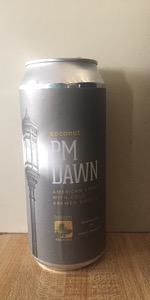 Notes: Continuing our exploration on the base of our bold American Imperial Stout infused with cold-brew coffee, we are proud to present Coconut PM Dawn. This batch utilizes our new Trillium blend cold brew from Barrington. Like our previous PM Dawn variants, we slightly dialed back the coffee ratio to allow the heavy dose of coconut to balance the beer and perfectly accentuate its flavor profile.

Coconut PM Dawn presents a dark chestnut brown color with khaki head and lacing. Bold, freshly roasted dark coffee aromas swirl to the nose accented by notes of sweet shredded coconut, toasted graham cracker, caramel and chocolate chips. On the palate, cold brew derived flavors of roasted hazelnut and melted dark chocolate interweave with a bright coconut profile calling to mind macaroons, Mounds bars, and Caribbean sugar cake. As with all of our PM Dawn variants, Coconut PM Dawn offers a medium to heavy body with a luscious mouthfeel and a light bitterness for a balanced and smooth finish.

Pours jet black with a thin head
Aroma is roasty and coffee. There is a slight hint of coconut but barely
Taste was full on coffee and some chocolate notes. I didn’t get any coconut except for some sweetness
Mouth feel is full, low carbonation and smooth. Finishes like a cup of sweet coffee and cream
Overall I thought it was a tad thin for a stout but had strong flavors except for coconut. I think the sweetness of the coconut lends to a fuller mouth feel.

A jet black pour that looks good in the glass, though quite thin for an imperial stout. The nose is overwhelmingly coffee - darkly roasted, almost Starbucks-style burnt. Some coconut and chocolate work into the nose as it warms, but for a beer labeled 'coconut,' there's not much of it in there.

The mouthfeel is soft and pleasant, with not much carbonation. The beer tastes strongly like a sweetened, canned coffee beverage. Again, the coconut is present but pretty weak for a beer that calls itself a coconut stout. Chocolate and vanilla are present, with more of the darkly roasted coffee. Very little roasted malt flavor and no hop bitterness at all.

Is this a coffee, or a beer? Trillium missed the mark badly if they meant for it to be the latter.

Enjoyed on tap at the final day of The Dive Bar being open.

A - Poured a nice dark black with a thin mocha head that fades to leave sticky lacing and a creamy blanket.

S - Aromas of roasty chocolate, nice really good dark malts, big roasted coffee. Not much in the way for coconut though.

T - Taste is similar to the nose with nice roasted chocolate and dark bakers chocolate. Loads of rich coffee and fruity sweeter beans. The coconut is on the sweeter side but lightly toasted. Really good coconut throughout that balanced nicely with the stout roast.

This tasted STRONGLY of burnt black coffee with some stale coconut notes. Not one I'll ever seek out, certainly...

Dark brown color, luxurious mouthfeel, full-bodied. The coffee is dialed back, almost imperceptible as the coconut is fully forward. Very pleasant taste, but coconut was so upfront, it didn't allow for much subtlety. Still, an outstanding Imp Stout.

Drank from a 1 pint can purchased at Trillium Brewing Company, Boston, MA
Canned on 05/31/19
Served in a tulip

The beer poured dark cola brown but appeared nearly pitch black in the glass. Thinner in body than I anticipated for the style. The liquid was capped by a finely beaded, saddle brown film that quickly fell to a thin halo. Some streaky lacing stuck along the glass.

There was a huge coconut presence in the aroma. Toasted coconut perhaps. Candy-like and also slightly artificial. A Mounds bar came to mind and maybe some sun tan lotion too. Roasted malts were also noticeable. Nice dose of dark roast coffee. Touch of dark chocolate as well.

The flavor profile was a bit rough around the edges initially but mellowed with time. Big malt presence on the front end. Roasted and caramel malts specifically. There was a somewhat harsh metallic quality, but this dissipated as the beer sat. Toasted coconut was again noticeable. Although the coconut was more subtle here than in the nose, it also seemed more authentic. Freshly brewed coffee and dark chocolate notes came through in the center. More roasted malts on the back end and the finish. Hint of lingering coffee-like bitterness.

Excellent soft, frothy mouthfeel. Medium-light bodied for the style. Creamy, slick and smooth on the palate. The liquid contained a fine, zippy effervescence that fluffed up beautifully.

While I typically love PM Dawn and its multiple variants, this beer had some things that worked well but others that did not. If you own a can of this, give it plenty of time to warm, as it gets significantly better as it opens up.

Appearance: Poured a pitch black color with a brown head that disappeared to nothing.

Smell: heavy mocha coffee with faint notes of hazelnuts and cinnamon. Plenty of sweet dark chocolate around the nose. Coconut is more subtle but it seems to accentuate the notes of hazelnut.

Taste: Whoa. Heavy mocha chocolate. Its sweet with hazelnut, vanilla, faint coconut and chocolate syrup. A latte covered in whipped cream and chocolate syrup comes to mind. Could use more coconut. Note this is about 6 months old, may have faded a little? But still, this does not disappoint!

Overall: awesome brew. Love the coffee and other flavors. I could crush through a can quickly as my taste buds keep asking for more! With this not being local to me, I really wish I could seek this out fresh.

Poured with a minimal tan head and a dark brown solid body. No lacing, really. Nose is full of roasted goodness, a lush coconut hit that the comes forward as it warms, and big coffee. Tasty and delicious chocolate. One very nice stout, very well integrated, big and delicious.

For $5 a can, this is tough to beat. There is a ton of rich coconut and a perfect level of coffee balancing it out without providing any roasted flavors. Chocolate, cocoa, and fudge brownies. Smooth, thick, creamy. This is a banger.

poured into a tulip glass via draft @ Trillium (Fort Point)

color is a rustic brown

easily the best of the PM Dawn's that I've had..this is blended very nicely with none of the adjuncts taking control

My expectations of this beer weren't terribly high, to be quite honest - my experience with Cacao PM Dawn just wasn't amazing, so I sat on this can for a bit...

And then I was finally craving a stout (this winter has been all IPAs and sours, strangely), and I had to dig out my Trillium glass. The nose on Coconut PM Dawn didn't make much of an impression on me at first, and then the coconut cracked me across the face like a sweet, creamy baseball bat - and it delivers in the taste as well, which really impressed me. Coconut seems to be more of a nose thing in many, many beers - not so in this one. Taste notes are straight up coconut chocolate milk - it's basically an Almond Joy in a glass. There's even a bit of light cinnamon. Coffee is faint to absent, but that's fine - intent doesn't matter so much to me when the product is so fantastic.

What an amazing surprise - creamy and sweet and delicious. Not so balanced - but it's a pastry stout. I'm quite happy with it - well done, Trillium.

Thanks goes out to TheMattJones88 for this brew.

Nose is all coffee but taste is all coconut. Sweet and rich coconut dominates the taste with subtle base coffee of pm dawn muted in the background, except on the nose. Full bodied. Hope this variant of PM Dawn becomes a mainstay.

Pours a dark cola color with a finger of effervescent caramel head. The head is gone in a hurry, leaving a few spots of lacing before settling into a thin sheet.

The flavor starts off with roasted coffee and brown sugar. Then comes a wave of caramel, toffee, molasses, and milk chocolate before Mr. Coconut bursts through the wall and screams "Oh Yeah!". There's some graham crackers and toasted almonds on the back end. Very sweet and decadent but also very well-balanced.

The feel is medium-full bodied with very soft carbonation. Creamy and smooth, like your mom's behind.

Overall, an exceptional imperial stout that definitely brings the coconut without abandoning the other flavors and aromas that make this beer great. It's decadent and sweet, but there's plenty of balance here to make it worth your while. Definitely hope to see this one again.

L — Pours a fairly dark shade of black with a finger of cola-colored head that fizzles away instantly. Zero retention or lacing
S — Cold brew, coconut, vanilla cake, gingerbread cookie, marshmallow, hazelnut, milk chocolate, hint of booze
T — Largely follows the nose. The added toasted nuttiness from the coconut really complements the coffee ice cream character of the base beer. Gives it this nice cookie-like quality too
F — Medium mouthfeel, medium carb. A bit thin for the style and ABV, but that makes it dangerously drinkable
O — Best PM Dawn variant so far

This one pours a very dark black color, with a small head, and a little bit of lacing.

This is easily one of the best stouts Trillium has ever done. The coconut is a nearly perfect addition to a basically perfect coffee stout. I get hazelnut and vanilla along with the expected coffee and coconut, and some nice roasty bitterness, along with a big old fudgy backbone.

This is thick and chewy, rich and big, with no booziness, and a very good level of drinkability.

This might be the best PM Dawn variant - outside of the actual PM Dawn, which is still basically the perfect coffee stout.

Had on tap. Pours opaque, jet black in color with minimal head. Taste is big coconut, both flakes and juice with a touch of coffee. Sweet, juicy, heavy bodied, with moderate carbonation. Incredible coconut taste. Overshadows the coffee, but for a non coffee drinker, I am not complaining. Will get this again. Feels like I am reliving my Hawaiian honeymoon.

Pours opaque black with a thin head of brown. Minimal retention or lacing. Chocolate-covered coconuts dusted with espresso grounds in the nose. Full bodied with a creamy, slick, chewy mouthfeel. Chocolate fudge with Italian roast and coconut on the palate. Finishes fairly dry with lingering roast, chocolate, and coconut.

Pours as a deep black color with a thin brown head on top. The smell of the beer has a nice coffee aroma with some subtle notes of coconut in there as well. The taste is really well balanced with the roasted malts, the coffee and the coconut. The feel is smooth and creamy. Overall I thought this was outstanding, I'm glad they put this on tap before I left the area so I could get to try it.