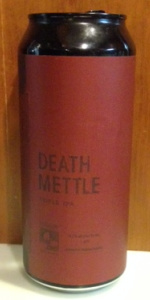 Notes: The newest member of our Mettle group is Death Mettle a Triple IPA in a devilishly drinkable disguise. Combining the hop bills of both Mettle and Heavy Mettle, we've created this intensely hop-saturated experience to pair perfectly with the ghosts and goblins of Halloween. Pouring a thick, hazy golden yellow, Death Mettle opens with concentrated aromas of juicy mango, pineapple, orange zest, and mixed stone fruit. Full-bodied, extremely tropical, and plush on the palate, this beer is built to satisfy the most chilling of hop cravings.

Rated by TheeWarPig from Michigan

4.54/5  rDev +1.3%
look: 4.75 | smell: 4.5 | taste: 4.5 | feel: 4.75 | overall: 4.5
Sweet orange/tangerine citrus, tropical hoppy, and slightly malty nose on this one! Taste follows with a smooth and juicy, hoppy and grapefruit citrus bitter swallow. As it warms, the grapefruit citrus bitterness becomes stronger and more dominant...lingers a while on the back of the throat. This is nice and soft on the palate...and wears the heavy ABVs well. Fantastic!
Nov 17, 2020
Rated: 4.48 by RickyBfromCT from Connecticut

4.41/5  rDev -1.6%
look: 4 | smell: 4.25 | taste: 4.5 | feel: 4.5 | overall: 4.5
This was one of many Trillium beers that I traded for with a friend recently, as he made a run up there right around Halloween. Never heard of this one before and even though it's quite potent, this was easily one of the best brews that I've had from them and one of the best Imperial IPA's that I've ever had. While the booze sneaked up on me, the taste and mouthfeel were deliciously enjoyable from the get-go down to the last sip!

As was typical for their offerings, this beer had a golden, muted, creamy look to it with a fair amount of light seeping through. Plenty of head topped it off as it settled nice and evenly but there was hardly any lacing left behind as I worked my way through this. Loads of mango, papaya, fruit cocktail, and pineapple in the slightly subdued nose as they wonderfully and harmoniously burst forth in the taste. The barley and wheat gave this a full, lively body while nicely balancing out the hops at the same time as the mouthfeel was vigorously dank and outdoorsy, especially in the aftertaste. A ton of the stone fruit and some garlic and onion spiciness also lingered once I finished this off, as they easily left me wanting another sip once the liquid in my pint glass quickly emptied out.

Yeah, there's booze here and no amount of nectar, slickness, sweetness, citrus zest, or hops could fully detract from the fact that this was a sneaky beer when it came to it's heft. Sure, you'll feel the buzz from this but with so much other goodness going on, you'll hardly even notice. Canned on the 10/01, this was a fabulous brew with a label that was completely appropriate for Halloween. Get this if you can and thank Trillium for pushing the edge of what an Imperial IPA is fully capable of!

Lots of tropical fruit...a touch of hop burn...I will say that the 10% is absolutely non existent... at least in the flavor...hidden extremely well...scary hidden...

I like the Halloween theme and the can art...

I have not had many Trillium beers but this is a dang good one..

L -- Milky orange haze with a finger of off-white head produced with aerate pour. Some retention and good lacing
S -- Apricot, yellow peach, musty cattiness, pineapple, overripe mango, wildflower honey, white grape, orange
T -- Straight hop nectar. Has that dank fruitiness, some garlicy spiciness from the galaxy, and a decent amount of pale malt sweetness that isn't overbearing. Probably the most 'balanced' TIPA I've had yet from Trillium
F -- Usual crisp, prickly, oily mouthfeel of Trillium's offerings
O -- Good stuff! Although not sure how this thematically connects to halloween in any way other than the name

Reviewed by mrbeer69 from Rhode Island

4.71/5  rDev +5.1%
look: 5 | smell: 4.5 | taste: 4.75 | feel: 4.75 | overall: 4.75
While at Trillium for lunch today, I treated myself to a nice Death Mettle on draft. The perfectly orange-amber hue illuminated the room as the sun rays penetrated the 10oz tulip glass. The pour looked too creamy to be a triple, but I've been tricked before. It went down so smooth. At 9.7% abv, the monotony of life faded with each sip; finally a brief moment to escape. It's the perfect beer for a short reprieve away from the desk. With each sip I felt this overwhelming sense of relief, only to be met by the feeling of emptiness as I finished the glass. My 45 mins. of freedom away from the desk are over. Until tomorrow friend, thanks for this brief, but beautiful moment.

Mango overtones with hints of dankness.

Reviewed by Fireman_RK from North Carolina

Completely opaque, bright yellow-orange appearance. This looked just like a glass of Tropicana orange juice. A small flimsy white crown topped the liquid, but it quickly dissolved. No lacing whatsoever.

The nose was super punchy and boozy. Fusel alcohol notes came through big time. Lots of citrus as well. Juicy orange notes were most apparent. As the beer sat, the alcohol calmed down and tropical fruits were noticeable. Ripe mango for sure. Bit of dankness too. Later, the mango really intensified, as did the dankness. There was also more sweetness.

The flavor was smoother and even fruitier than the nose. My initial impression was that the alcohol definitely seemed more subtle. Fantastic balance of juicy citrus and ripe tropical fruit notes. Like the aroma, super orangey. Freshly squeezed orange juice specifically. Orange sherbet perhaps as well. Fairly sweet. Bit of tangerine too. Somewhat tart and tangy. Tropical fruits kicked in next. Big ripe mango presence. Hint of dankness. Boozy notes appeared on the back end. Candied citrus peel rounded things out in the finish. Grapefruit was also apparent. Nice melding of fruity sweetness and lingering bitterness.

Excellent smooth, creamy, fluffy mouthfeel. Full bodied for the style. The liquid contained a fine, zippy effervescence that frothed up beautifully on the palate.

Death Mettle came across as exceptionally boozy initially but really improved with time. Be sure to allow this beer plenty of time to warm and it will transform into something pretty fantastic.