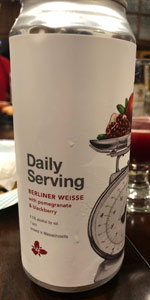 Notes: Daily Serving was born out of our desire to express intense, saturated fruit character in beer form. After thoughtful experimentation with Permutation 6.47 and 6.51, we found that a base recipe similar to the German Berliner Weisse style, with its delicate, yet fluffy mouthfeel and even-keeled acidity is the perfect foundation for robust fruit additions.

Pouring a gorgeous deep magenta with soft, glowing haze, Daily Serving: Pomegranate & Blackberry bursts from the glass with aromas of fresh-picked midsummer berries. Notes of tart Concord grape, juicy pomegranate seeds, and a hint of sour cherry weave in and out across the palate. Pleasantly tart, with a sweetness comparable to fresh-squeezed fruit juice, Daily Serving: Pomegranate & Blackberry finishes clean and refreshing.

Drank from a 1 pint can purchased at Trillium Brewing Company, Boston, MA
Canned on 12/27/19
Served in a tulip

The beer poured a gorgeous, thick and pulpy, oxblood red hue. A two-finger tall mass of light crimson froth topped the liquid and slowly fell to a thin collar. No lacing whatsoever.

The aroma was really crisp and dry with some tart berries detectable in the background. Powdery yeasty notes dominated. As the beer warmed, the fruity notes appeared. Blackberry came through strongest. Raspberry was also noticeable. Perhaps some blueberry too. Not sure I would pick out the pomegranate however. Later, the fruitiness became even more potent.

The flavor profile was also fruity and quite tart. Red currants and/or cranberry would definitely be my first guess. Perhaps some raspberry and blackberry too. Bit of yogurt-like tanginess. Tart, wheaty and slightly lemony in the center. More fruity tartness and acidity on the back end and the finish. Again, red currants and berry notes came to mind rather than pomegranate. Hint of seed-like bitterness after the swallow.

Excellent soft, fluffy mouthfeel. Creamy and full bodied for the style. The liquid contained a fine, fairly aggressive effervescence that turned frothy and smooth on the palate.

This is another impressive release in Trillium’s Daily Serving series, albeit not quite as good as their original raspberry offering. The pomegranate was difficult to pinpoint, but the berry notes came through big time. I look forward to trying the black currant, blackberry and boysenberry release and seeing how it stacks up to the first two.

Poured from a 16 oz can into a stemmed harmony glass.

Pours an opaque deep ruby color with a finger of creamy pink head. The head leaves a nice crown of lacing as it settles into a thin sheet.

The aroma is a bit faint, bringing notes of white bread and subtle blackberries. There's some graham crackers and pomegranate on the back.

The flavor is an explosion of pomegranate, blackberries, cherries, graham crackers, and cranberry juice. Very sweet and faintly tart.

The feel is light bodied with good carbonation. Crisp and very dry.

Overall, a very good Berliner that lacks an interesting aroma, but has flavor exploding out of the glass. Very drinkable.