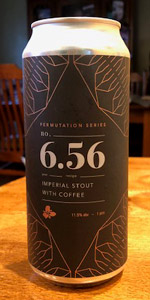 Notes: Permutation is our experimental series of small batch offerings, showcasing the unique visions and innovative concepts developed by our production crew. The names are sequential, reflecting the brewing year in Trillium's lifespan, followed by a recipe indicator. It's no secret that we love the interplay between Barrington coffee and a blend of dark specialty malts. We've brewed many coffee stouts throughout the years, but we're continually experimenting with different roasts and bean varietals, exploring the range of how coffee can express itself in beer.

From the can, it pours a dark brown color with some clarity, however, it looks pitch black in the glass. A modest tan head dissipates quickly and yields a thin ring of lacing. Towards the final phase of the drink, the beer’s clarity reveals some nice ruby colors.

The nose is dominated by wonderfully fragrant notes of coffee, espresso beans and roasted malt. These are supported by rich aromas of dark toasted malts, cocoa powder and bakers chocolate, vanilla and a hint of dark fruit. Very pleasant to smell overall.

Full bodied with a moderately gentle carbonation. The mouthfeel is amazingly smooth and creamy. The flavors open with sweet notes of doughy biscuit, dark toasted bready malts, brown sugar, chocolate fudge and vanilla; very cola like at first. I feel that the drink really begins to come into its own as the coffee and espresso flavors open up and mesh with the roasted malts. These, along with earthy hops, add a nice bitterness that cuts through the initial sweetness. Furthermore, the high ABV is well hidden, neither boozy nor too hot. The finish is roasty, dry and has an espresso like bitterness.

Great imperial stout that is nicely balanced between malty sweetness and roasty bitterness. The coffee adjuncts, in particular, add a nice touch.

O - Dare I say this beer is fantastic? Recommended.

Black Pour, thin brown head on top. The smell of the beer has a heavy roasted aroma. The taste is really good, it's loaded with coffee and some sweetness to balance it all out. The feel is very smooth, silky and rich. Overall it's a really good brew, should've bought more than just a 4 pack.

Inky thick black pour. Smell of freshly perked coffee is noticeable, as is roasted malt. Flavors blend well; this is a mellowed stout that masks is potency very well. Glad to pick up a 4pk from the brewery and enjoyed this one.

Drank from a 1 pint can purchased at Trillium Brewing Company, Boston, MA
Canned on 01/03/20
Served in a tulip

Dark cola brown appearance. Lighter in color and thinner in body than I anticipated. The beer was capped by a small, finely bubbled, saddle brown head that quickly dissolved. A medium halo encircled the liquid. Tiny patches of lacing stuck along the glass.

The flavor profile was also somewhat underwhelming. Coffee again was most prominent. Medium roast coffee perhaps. Roasted malts were noticeable up front. Touch of brown sugar sweetness and vanilla in the center. Toasted grains came through on the back end. The beer finished slightly ashy with a subtle boozy note and a lingering metallic quality. As the beer sat, the metallic note disappeared but the booze intensified.

The mouthfeel was fluffy and quite thin for the style. A medium bubbled, fairly aggressive effervescence gave the liquid a surprising lightness on the palate. As the carbonation mellowed, the beer turned smoother and creamier.

I usually love Trillium’s coffee stouts, but Permutation 6.56 was rather disappointing. If I found this sitting on a shelf at my local liquor store, if I might think it was fine. However, for by Trillium standards, it definitely lacked complexity and intensity in both flavor and mouthfeel.