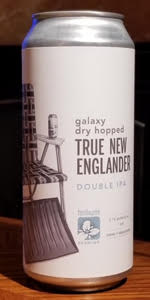 Notes: Genuine New Englanders are the type of people who are brave enough to take on a long, snowy shoveling session and lighthearted enough to crack a beer in their lawn chair afterward. Our annual Sabro-hopped Double IPA is brewed for those True Englanders. For the first time, we've added a complementary hop varietal to the dry-hop: Galaxy.

Like its predecessor, Galaxy Dry Hopped True New Englander presents a hazy deep golden yellow in the glass. Intense piña colada aromas immediately transplant us to paradise in the tropics. Galaxy's signature ripe pineapple, passion fruit juice, and pungent citrus notes are an excellent pairing for the characteristic coconut that Sabro brings to the table. With a full-bodied and plush mouthfeel that stands up to the beer's incredibly juicy spirit, Galaxy Dry Hopped True New Englander is an instant favorite.

Flavor starts off with tangerine, sour orange juice, red grapefruit, Razzles candy, apricot, faint pineapple, tart pear and some brown sugar or light caramel, followed by biscuit, light peppery spices, lemon zest, rose pedals or fresh cut flowers, weed or fresh cut grass, lime and tropical fruits. It gets sweeter as it warms up but never crosses the line. The feel is almost flat with very mild carbonation, a nip of bitterness and no sign of the 8% ABV. The malt remains in the background but helps keep this very balanced and enjoyable.

Drank from a 1 pint can purchased at Trillium Brewing Company, Boston, MA
1/22/20
Served in a tulip

Hazy, dull straw yellow appearance. The body was topped by a flimsy white film that quickly fell to a thin halo. A few tiny drips and streaks of lacing stuck along the glass.

The aroma was terrific. Super fruity and quite sweet. Juicy mango notes came through strong. Lots of ripe peach and apricot too. There was a subtle wildflower honey quality as well. Bit of dankness. Later, citrus notes appeared. Orange flesh was most noticeable. Touch of white grapefruit.

The flavor profile was a lot more citrus forward than the nose. White grapefruit dominated. Good dose of tangy tangerine as well. Nice blend of crisp wheatiness and creamy oats throughout. Pineapple was noticeable in the center. Bit of lemony tanginess. Grapefruit rind appeared on the back end and carried into the moderately pithy and bitter finish. As the beer sat, the flavor profile turned somewhat sweeter. The peach and mango notes that were so prominent in the flavor also came forth here.

Fantastic fluffy, fuller bodied mouthfeel. Super creamy, slick and smooth and a palate. The liquid contained an ultra fine, rather zippy effervescence that fluffed up beautifully on the palate.

This Galaxy dry hopped True New Englander variant is an all-around terrific beer and nicely straddles the territory of a single/double IPA. Be sure to allow this time to warm, as gets even better when it opens up.

Can from the Fort Point brewery in Boston on the weekend of EBF 2020. Pours a hazy light gold with fluffy white head and good lacing, smell is overripe tropical fruit, frozen orange juice concentrate, and marshmallow candy/ lucky charms, taste is ripe cantaloupe and papaya, hint of orange zest, zero bitterness, this beer is soft and creamy. There are moments it flirts with mashed potatoes and milk but it never fully goes there. This is mostly a melon/papaya bomb.

A - Opaque medium to dark with a thick cream colored lacing ring.

M - Thick, chewy, and semi-dry on the back of the tongue.

O - This is a fantastic D-IPA! Recommended.

Really nice and light enough (texture and finish wise, forget ABV) to be almost sessionable relative to other NEIPAs. Peach is predominate, so much so my girlfriend couldn't drink it (hates peach anything after an unfortunate experience in college). Nose is a bit of a late summer fruit salad with ripe peach-raspberry notes, a strong note of dense wild grape tying it together-- it does remind me of the wine grape finished trillium IPA's just a little bit (though i am generally not a fan of those, interesting, but not a fan). It's pretty goddamn delicious, on the sweeter side, and not overly malty or hoppy to the point your palate is saturated at the end of a pint.