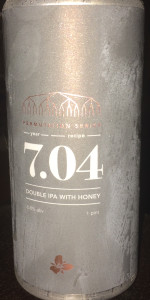 Notes: Permutation is our experimental series of small batch offerings, showcasing the unique visions and innovative concepts developed by our production crew. The names are sequential, reflecting the brewing year in Trillium's lifespan, followed by a recipe indicator. With Permutation 7.04, we took Citra Cutting Tiles and added Munich Malt to the grist bill to amplify the body and introduce subtle notes of caramel and biscuit that play wonderfully with the local raw wildflower honey.

Pouring deep orange with a heavy haze, Permutation 7.04 first offers Citra's characteristic notes of orange juice and mango, before more nuanced aromas of citrus zest, floral honey, and fresh-baked biscuit make an appearance towards the back of each sip. Medium-bodied with a soft mouthfeel, Permutation 7.04 finishes dry with just a touch of restrained bitterness.

16oz. can served in a tulip. Pours a dull, hazy orange with a fizzy, quarter inch, off-white head that quickly dissipates into a froth around the edges. Great nose - orange juice, mango and hints of pith. Taste consistent with nose, albeit not as juicy and there's a bit of crackery malts that cut across the flavor profile. Mouthfeel is light in body with an assertive carbonation and a mild acidity. Overall, a solid offering.

Picked-up four cans as part of a mixed case, courtesy of Trillivery. My fourteenth brew from these guys. Very solid brew, doesn't drink like an 8.8.

Drank from a 1 pint can purchased at Trillium Brewing Company, Boston, MA
05/05/20
Served in a Trillium Permutation Series glass

The beer poured a murky yellow ochre hue and was topped by a small, bubbly white cap that quickly dissolved. No lacing whatsoever. In the glass, the liquid looked nearly flat.

The aroma was fantastic. Big stone fruit presence. Peach and mango notes came through strong. Quite sweet, but appropriately so. Bit of honeydew melon and ripe guava as well. Touch of dankness.

The flavor profile was also really hoppy and intense, though quite different from the nose. Citrus dominated. Tangy tangerine and clementine notes immediately came to mind. Some juicy orange too. Touch of pineapple in the center. Orange peel appeared on the back end. Grapefruit rind came through in the finish. Bit of lingering pithy, resiny bitterness after the swallow. As the beer warmed, peach and mango notes appeared.

The mouthfeel was a bit disappointing. Somewhat lighter bodied for the style and fluffy on the palate. The liquid contained a moderate, larger bubbled effervescence that seemed a bit excessive initially. With time, the carbonation settled and the beer turned smoother and creamier.

All in all, this is another impressive offering in Trillium’s recent Permutation series. The stone and tropical fruit notes were kickin’, and the honey gave the beer a pleasant sweetness. Nicely done.

Sweet orange/tangerine citrus, bready/biscuity, and hint of honey nose on this one! Taste follows with a hint of honey sweetness upfront and some citrus bitterness on the swallow...some hoppy dankness shows up at the end. This has good depth and decent mouthfeel. This is good!

Can poured into a teku, off white yellowish , plastic big bubbled foam cap that quickly recedes . Settles to a ring over a hazy, murky orange liquid, active carbonation , looks like apple cider

Permutation 7.04 from Trillium Brewing Company
Beer rating: 92 out of 100 with 20 ratings