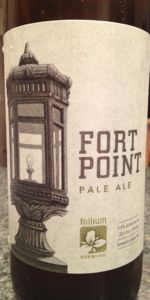 Notes: Our signature American pale ale balances light, crisp, malt character with an abundance of hop-derived aromatics and flavors from the use of Citra and Columbus. The fragrant nose is fresh citrus, tropical fruit, and peach. Bold flavors of pineapple and mango mix with dank notes of zesty citrus and fresh pine needles. With the smooth mouthfeel, gentle bitterness, and dry finish, Fort Point is our standard daily-drinker.

L: Pours a hazy, straw yellow with about a finger or two of sudsy head. A little bit of lacing is left as I drink this.

S: Smells of mango immediately invade my nose. A medley of faint orange and lemon also come through. A little papaya also comes through. I can tell that this beer has citra hops in it. I had the galaxy dry hopped edition and the nose was completely different.

T: The taste follows the nose pretty well. The mango and orange come through at first with a bit of lemon. The yeast is pretty prominent in the taste as well, which is something that many breweries cannot pull off. The bitterness on the back reminds me that this is a well hopped beer. Simply fantastic.

F: This feels heavier than 6.60%. I'm not used to such full flavor in an American Pale Ale. Regardless, I'm tempted to take another sip almost immediately after the sip before it.

Overall: This is a world class pale ale. The appearance is juicy, the smell is tropical and the taste is both. The mouthfeel is more of a regular IPA than a pale ale, but it's still pleasant. I think I might prefer the Galaxy dry hopped version to this, but this is still one of the best out there. I'm thinking I might have to do a side by side to settle the debate.

Pours a very hazy mango color with a sudsy white head that provides a bit of lacing. The nose is a dictionary of dankness - ripe tangerine, lots of mango, pineapple, a bit of grapefruit, and a smidge of pine. I am literally salivating.

The mango and ripe tangerine are forward and dominant on the taste, but there’s room for the pineapple and that bit of pine, which is a bit x2 on the taste, providing a little bit of bitterness that works exceptionally well with all the dank citrus.

99?? Y'all are crazy!! Maybe I've become so used to IPAs and Stouts which give remarkable favours but this was kind of bland and skunky tasting despite the week old date. I got orange rind and dish soap. It has a creaminess that reminds me of Julius but its almost as is someone sucked all the deeper flavours out and left you with the base of a good IPA. I'd never buy this beer but it was included with a package buy. In concept a juicy pale ale sounds interesting but I think adding the haziness does nothing for the style. This beer does not live up to the rating.

Nice looking beer. Thick luscious appeal. It has citrus elements and finishes dry and more bitter than one might expect from its appearance... but i found this to be a rather nondescript ipa... (and then i see its actually a “pale ale”... maybe all pale ales are just “nondescript ipas”?) Nothing outstanding. Nothing that I’d really think twice about. I was shocked to see the score of 99. My can was a month old so Im going to attribute its lackluster appeal to that.

Very balanced and drinkable. Not notable for a unique flavor, but a solid pale ale that I enjoy every time. Can't hold up to IPAs and DIPAs unless you're looking for something lighther.

TASTE: same flavors as above, hints of lime and ash in finish.

FEEL: light to medium body, a little lacking in carbonation.

Good tasty and refreshing sipper for a summer day.

A fine, tasty beer delivering some fine complexity and respectable depth to the palate. Very tasty...

Can courtesy of yllib.
Combination of Mello Yello soda and orange juice with white meringue head.
Tropical fruits. Oranges and pineapples dominant. Little citrusy balance.
Truly juicy full mouthfeel. Dry finish.
As juicy an American pale ale as you could ever ask for.
A very close sibling to their “launch beer”.