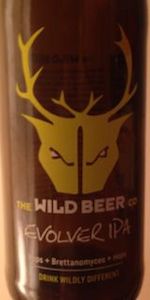 Notes: The exploration of yeast strains and the different results we can achieve are beautifully exemplified in Evolver, a pale ale with a difference. 100% fermented with Brettanomyces. For the first 3 months the beer tastes the same as a fresh pale ale, then the differing flavour compounds start to shine through and after 6 months the Brett really takes hold.

The brettanomyces yeast is particularly good at keeping hop flavours fresh for far longer than traditional brewing yeasts. The Evolver takes on a more complex character over time as the yeast and the hops combine to produce a new and exciting beer that will continue to evolve as the yeast slowly matures the beer.


This is a beer that can be drunk fresh, as a normal pale ale or left to evolve and mature into a unique and unusual beer.

Rated by hk117 from Hong Kong

4.73/5  rDev +24.8%
look: 4.25 | smell: 5 | taste: 5 | feel: 4.25 | overall: 4.25
I am systematically eradicating the dreaded Bottle Backlog here at Chez Woody! It was a long time in its (unintended) creation, thanks to too much travel & drinking away from home, but thanks (?) to unemployment/underemployment, I have been given the impetus to really plow into this mélange. It is paying off as I can see floor space & carpet where it was previously buried & some previously inaccessible doors are now available as ingresses/egresses.

Out of the Law of Unintended Consequences comes many opportunities to conduct horizontal tastings, defined as the same style and many breweries OR in my case, the same brewery, many styles. The obverse is a vertical tasting of the same beer with many vintages, generally ranging from freshest to oldest to gauge maturity (I have none) as well as the cumulative effects of the aging process. These next are an example of a horizontal.

From the bottle: "Hops + Brett + Hops"; "Beer 100% Fermented with Brettanomyces"; "Drink Wildly Different"; "We believe exceptional brewing stems from imagination and passion, it's not just a process. By introducing our love of wild yeast strains and not being confined by rules, tradition or ingredients, we can add a Wild 5th ingredient or process to our beers, We want to give you a truly memorable drinking experience, altering your perceptions and thrilling your taste buds. Drink Wildly Different."; "The exploration of yeast strains and the different results we can achieve are beautifully exemplified in Evolver, a pale ale with a difference. 100% fermented with Brettanomyces. For the first 3 months the beer tastes the same as a fresh pale ale, then the differing flavour compounds start to shine through and after 6 months the Brett really takes hold."; "The brettanomyces yeast is particularly good at keeping hop flavours fresh for far longer than traditional brewing yeasts. The Evolver takes on a more complex character over time as the yeast and the hops combine to produce a new and exciting beer that will continue to evolve as the yeast slowly matures the beer."; "This is a beer that can be drunk fresh, as a normal pale ale or left to evolve and mature into a unique and unusual beer."

I Pop!ped the cap & began a gentle pour, in keeping with my New Year's Resolution and my Lenten denial. Aggro pours from bottles are now (mostly) a thing of the past. I am really coming to embrace a vigorous in-glass swirl since it is much less likely to bungle things up. In this instance, I raised a brief finger of foamy, tawny head with modest retention that quickly retreated back to wisps. Bye! This also allowed the nose to waft forth in a manner evoking Eau de Broken Sewer Line. Eeek. I had clearly followed instructions & allowed it to mature into something unusual. Color was a gorgeous solid Amber (SRM = > 7, < 9) with NE-quality clarity. Lifting it to my lips gave me an opportunity to really take in its nose. I will now be looking for a pony in the midst of all of this s**t! Mouthfeel was medium, but very spritzy & carbonated. I am pleased, no, make that ecstatic, to report that the taste did not live down to the nose. Instead of dung, in its many wondrous forms, it tasted like a bourbon barrel-aged beer with a lot of oaky woodiness and especially a coconut flavor that was especially evocative of bourbon! OMFG! How long has this been aging? I want to try to recreate this! I will guarantee you that it is no longer anything even remotely resembling an IPA. The other effect of the Brett. was its extremely dry finish. Bone dry. So dry that I needed to reach for my asthma inhaler dry. Dry as the Zephyr winds blowing across the Sahara dry. Draai as that Laag in Millvale, PA. Dry! Bye.

Aroma: Generally quite light, but what I do get is light funk and brett with some tropical peach and mango and maybe a touch of orange.

Overall: Nope, I didn’t get this one. Aroma while too light, was nice, but everything else just didn’t really go with each other and just seemed out of sync.

3.52/5  rDev -7.1%
look: 3.25 | smell: 3 | taste: 3.5 | feel: 4 | overall: 4
On tap at Specialty Beer Cellar. Hazy orange, maybe a little dull in color. The head is gone quickly. Brett provides most of the brightness in the nose. The hops are earthy and herbal, with just a little bit of musty grapefruit. Tastes much brighter, again seemingly from the brett. The hops almost taste old. Brett lends a bit of tang also, like sour grapefruit. Earthy and spicy finish with a moderate bitterness. Medium light body. Better when it’s cold, as it becomes very grassy as it warms.
Jul 10, 2016

4/5  rDev +5.5%
look: 4 | smell: 4 | taste: 4 | feel: 4 | overall: 4
A: Poured into a tulip to a nice hazy golden orange with a dense three finger white head that retains well with some lacing
S: Smells of barnyard funk and horseblanket with some nice jiucy citrusy hops and a hint of tartness
T: Taste is citrusy hops with a slight tartness followed up with some brett influence with some barnyard and horseblanket. Slight doughy bread flavors as well. Hints of band aids and medicinal toward the back end and on the swallow we get some more citrusy hops with a little tropical fruit and some lingering tartness with some musty funk
M: This one is fairly light in body but not watery with adequate carbonation and a drying finish
O: Not a bad beer at all with interesting flavors and some nice complexity. Definitely one to try if you like wild ales and hops. Hops are a little weak but I've had this bottle for a bit and it came from England.

Reviewed by agreenman19 from Connecticut

S - faint Brett and fresh straw. Smells like a brand new farm, not quite a well worn one.

T - sour warheads up front. Makes my lips curl. Barnyard earthy tartness. So earthy. Bitter like crab grass. Leaves a mealy funk on the tongue well after the sip.

O - this is certainly a "wild" beer. Has a very primal aura about it. Not sure if that's a good or bad thing, but it brings me back to my caveman roots.

Reviewed by Todd from California

Decanting carefully to avoid the dregs yields a bright golden, lively beer with a creamy lace. Distinct Brettanomyces in the nose with aromatic floral hops. Prickly and creamy on the palate with dry crispness beneath. Browned apples, stone fruit skin, earthy grassiness, rind bitterness, herbal, bready and funky notes linger on the tongue. Evolver IPA boasts a heavy dose of hops and 100 percent Brettanomyces fermentation with loads of bold, bright flavors as a result. A great twist on an overdone style; the IPA, of course.

S: An extremely fruity aroma, with some hops and a funky quality.

T: Tasted of hops, tropical fruit, pine notes, brett, yeast, and the funkiness. A surprisingly dynamic flavor with a lot of fruity characters. Well balanced between the hops and other elements in the flavor.

F: A good amount of carbonation with a slightly slick finish. Medium-bodied.

O: An unusual beer that doesn't really fit into any stylistic category - but this isn't a bad thing. Very enjoyable.