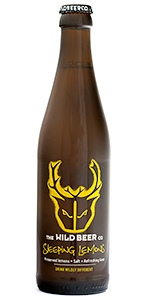 While the natural taste of Gose trends lemony, the brewers of The Wild Beer Co. push those flavors into the citrus world a little more with preserved lemons added to the beer making process for that added pep and refreshment.

With a slightly burnish yellow pour, the hazy Sleeping Lemons builds a short but frothy crown while drifting across the nose with an earthy citrus perfume. Leading with lemon, there's a musty sea-like scent with a peppery twinge and a mild floral aroma all at once. Its gentle sweetness takes the shape of sourdough, saltwater taffy and honeysuckle with its initial taste.

But the middle palate is all about the preserved lemons. Stewed, aged and condensed in its weathered citrus brine, the lemony flavors are strong and back up the natural citrus acidity, wine-like, cider-like flavors of the natural German sour ale underneath. Early floral character turns spicy and peppery as the flavors develop a nearly cumin-like character with light bitterness and piquant tartness with the ale's closing.

Medium-light on the palate, Sleeping Lemons trends dry with a crisp and refreshing character overall. A quick followup of damp burlap and gently bruised lemons frame the beer's brisk aftertaste for an authentic Gose session with a less authentic citrusy kick.

A 330ml bottle with a BB of July 2021. Acquired a little while back from a webshop. Described on the label as a gose-style beer brewed with preserved lemons; named after the Moroccan term for said lemons.

A: Poured into a tulip. Bottle conditioned. A light golden colour with faint haze and modest carbonation. Produces a decent head of frothy white foam that settles and dissipates almost immediately.

S: Aroma of tart fruitiness - the initial impression is of apple juice but this gives way to hints of lemon, salt, earthiness, yeast, subtle lactic acid and a touch of funk. Rather nice.

T: Tastes of sharp, salty lemons with notes of lemon rind, earthiness, lactic acid, yeast and a twinge of funk. Very dry, with a crisp, refreshing character that doesn't linger. No discernible bitterness.

M: Mouthfeel is smooth, tingly and dry, with spritzy carbonation and light body. Quite astringent; dries the palate. Aftertaste of tart lemons, earthiness, yeast and a touch of salt.

O: An interesting variation on the gose theme. Looks alright, while the aroma and flavour are tart, salty and dry with a balanced dose of lemon. Decent body. Drinkable and very refreshing - would be perfect for summer. Worth sampling.

Cloudy gold colour. Smells tart, salty and a little funky. Fermented citrusy lemon peel; a little sweet. Tastes juicy and light overall. Light to medium bodied. Tastes like a nice clean lemon gose; lon juice with a bit of salt and not much else. Very refreshing and has no noticeable lingering flavors or afterpalate. Balanced, more crisp than juicy or sweet. A great summer sipper.

On tap in Salvation Jane, Clermont-Ferrand.

A simple gose but an effective one.
Nice on a hot summer day

Clear straw color with a bit of foam. Aroma has briney lemon notes with light spices. Taste has lemon and spices, quite light overall and fades quickly leaving a dry lemony taste. Light body, medium plus effervescence. Overall it's easy drinking and light but quite simple.

This Gose seems promising at first glace, but loses everything once you take a sip. The lemon flavour is incredibly artificial, with a finish exactly like off brand lemon Gatorade. What a disappointment, not worth your time or your money. I couldn't even finish it, poured out half.

On tap at Cask Pub & Kitchen. Pours pale yellow-gold. Nose is citric and a bit yeasty. Taste is refreshing, acidic, lemony. Simple but a good summer beer. Crisp medium-ligh mouthfeel. Overall, I liked it, but not memorable.

The colour is pale cool yellow (4 EBC), the liquid is cloudy. The low white head disappears quickly leaving no lacing.

The smell is earthy/yeasty with some lemon soda. Hints of iodine and iron. More funk than expected.

The taste is salt with distinct notes of earth/soil and wet paper. Some artificial lemons and lactose. Light to medium body. The aftertaste got growing notes of salt and tart fruits. The finish is short with light sweetness.

The carbonation is medium strong with lots of small long-lived bubbles. The liquid is semi-smooth.

A very odd beer, I have no idea if it is supposed to taste like this.

On tap at York River Landing.
In a snifter the beer was a clear golden color with no head.
A nice lemon aroma. The taste was mostly all lemon with a hint of salt.
This was a crisp, tart beer. I would like to have it on a hot summer day.

Had this beer at the Oersoep fest in August. Yellow hazy beer with no head and no visible carbonation. The smell was light and citrusy, and the taste quite refreshing, most all Gose beers I had.

Platinum blonde with basically no head. Looks light. Smells lemony – uncomfortably similar to lemon cleaning products, actually. Or like Lemonheads mixed with vinegar and sourdough starter. Oh and a little pee, unfortunately. Tastes REALLY similar to how Lysol or lemon Pledge smells, but thankfully the flavor is fairly light so it isn't overwhelmingly gross. Instead it's just a little gross, and then kinda nice in the finish and the aftertaste. In fact, the more I drink, the more it grows on me, calling to mind a super dry version of Schweppes lemonade. It's perfectly light and dry and clean, and very refreshing, but your enjoyment of this beer will depend on how much the chemical cabinet overtones distract you from its more pleasant characteristics. Possible food pairings: oysters, mussels, seaweed salad, miso soup, goat's cheese.