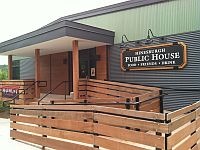 View: Place Reviews
Reviews: 4 | Ratings: 9 | Log in to view all ratings and sort
Reviews by neliam24:

I have always enjoyed my every time I have been here. Pretty well kept, good service. About 12 taps, I think. I think they reserve one or two for ciders. They have a deck for the Summer. It's do-able if you're in the area, but I wouldn't go out of my way just to go here. Food is very good for what it is, but it is a bit pricier.

Above average restaurant
For beer they can't do flights so limited

To the town East of me sits this fine little pub.
The vibe here, well, its a happening little place in the Summer, but go there this time of year, eh, not so much. I'm not worried, as they (the staff) keeps up with the place keeping it very clean. With about 12 taps of mainly beer, about 1 or 2 of some ciders, they usually range from all over Vermont. Only non-Vermont beer was Weihenstephaner's Vitus. The food is very well done. Half off burger Mondays are worth it. I say when you're in Hinesburg, it's worth a stop 'cause you're not going to find anything else to drink and eat at in town.

Nice, relaxed place to hang out and meet up with friends. The true definition of a public house.

As previously stated, the Hinesburgh Public House (HPH) is not a beer geek destination, but only if you're looking for 100 taps because it does have a great variety which is constantly changing. Since opening in December of 2012, it has had countless micro-brews flow into the restaurant. One of the best qualities of HPH is that they only keep four local beers on tap year round. Some of the most popular beers in Vermont is what you'll find including Switchback Ale, Fiddlehead IPA, Drop-In Brewery's Sunshine & Hoppiness and the up and coming hard cider phenom, Citizen Cider with their Unified Press. With constant rotating taps, HPH keeps their LOCAL beer geeks returning with eagerness to try the next rotation of craft brews.

Some of the most recent crafts from out of state that found their way into HPH include Green Flash Brewing's West Coast IPA and Double Stout, Ballast Point Sculpin, Six Point's Sweet Action, and Lagunitas' Undercover Investigation Shutdown Ale. With constant rotating amazing beers from outside Vermont, HPH also does an amazing job keeping their local brewers in mind with brews ranging from Drop-In Brewery, Fiddlehead Brewery, and the newest collaboration between Otter Creek Brewing and Lawson's Finest Liquids called Double Dose, which is a Double IPA full of flavor and hops!

Along with these fantastic beers is a great selection of wines and house infused liquors which the bartenders create themselves. If you're sitting at the bar, you better hope Renee is behind it, because she knows her sh*t! But if you're dining in with the family, ask for Sara, she's the best server they have, hands down!

Needless to say, if you're looking for a great restaurant with amazing farm-to-table cuisine, a great selection of local and non-local craft draughts, and some great service, the Hinesburgh Public House is the new hot spot in Hinesburg you must try!

Hinesburgh Public House is not a beer geek destination. That being sad, it is a great place to go to enjoy great local food, unhearlded local brews, great regional & national beers.

You can usually find beers on tap from Fiddlehead, Drop In Brewing, Switchback, Sixpoint, Ballast Point and others. There are 12 taps a small but tasty bottle and can list. Drafts are reasonable Fiddlehead IPA's was $4 a pint and Sculpin was only $5. Plenty of wine & cocktails.

The local food is a main focus here. Every night they offer something different braised, the last time it was short ribs on garlic polenta,mmm! Plenty of burgers, beef, salmon, turkey & veg. Their perch finger appitizers were very tasty. As local resturaunts go, the prices really are not bad, pretty reasonable.

Service has been prompt and friend. This place just openned in December of 2012 and you already need to make reservations, even on week nights.

I'm loving the fact that in the summer it's close enough for me to be able to walk to.

Update: The prices here have really crept up and the portions have shrunk. I am revising my rating.

Hinesburgh Public House in Hinesburg, VT
Place rating: 3.88 out of 5 with 9 ratings