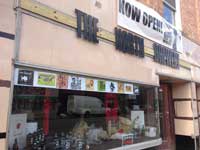 cool that these little breweries seem to be springing up just about everywhere now, its amazing really, and we excitedly reconnected with an old friend here. the place is small and impossibly humble, a nondescript old storefront sort of space with the bar running down one side, loud radio rock playing, and a huge crowd on a saturday afternoon. it didnt take too long to get beers from the bar, but we also really didnt get to chat to anyone here, somewhat impersonal, but prompt enough. they only had a few beers on tap, like maybe five total, but i think they had an event going on for a stout they do called big bad leather daddy or something, a variant or two on tap, some bottles of different ones too. i had an almond one that was quite good, but i didnt fall in love with any of the beers i had in here despite the high praise i have heard others speak about their stuff. the two hoppy beers i had were fine but a little amateur. the highlight was a cinnamon and coconut stout with chili peppers in it, really pretty exceptional, but none of it really blasted me off, and the selection was pretty weak, a belgian, a lager, a blonde, anything really, they needed something other than cloudy hops and heavy darks, but it was not to be on this day. the space was fine, but i was bummed to not find a single seat in here, like no tables and chairs at all, we hovered around a barrel in the corner, not the most relaxing place to pass the time, but i like the humble hard working vibe in here. affordable prices, ambitious beers for the most part, and further proof that cool beer is happening everywhere...

This brewery was pretty small but pretty good too. Quality of the beer was decent, all beers I enjoyed. They had 5 beers on tap: a pumpkin porter, a stout, an IPA, and two sours. All were decent but nothing really stuck out. Not a bad brewery to stop at although I do wish they had more taps however, the bartender did say their taps switch out very frequently because they do have a lot of regular customers. Good enough for a second stop to this place but nothing that Wowwed me.

Was introduced to this when visiting family. A new, very small, local brewery.

V: Nothing going on here. No seating. Only standing room at a bar without stools. Barrels are stored in the back which do give an interesting backdrop. I know this place is small and new, but this really needs work.

Q: No quality complaints. You can tell these guys really care about their beer and the work they're doing.

Ser: Knowledgeable bartender who answered a few questions for us. Constantly kept the glasses full.

Sel: 5 taps doesn't exactly scream selection. One good thing is that they do sell dog treats from the brew process leftovers.

Stopped here coming back from a trip to Rochester because I liked the beers I had from them at EBF and wanted to see what else they had to offer. The selection was decent, The service was good. The vibe was a little bit of a dive in my opinion, there was just a bar with no stools or tables to sit at there. It's an interesting spot, seems like the customers come in for a pint and leave right away.

The Single greatest beer drinking experience I've ever had. Went to the Big Bad Leather Daddy release this past friday morning, knocked on the window early and got a ticket to taste some 2015 bottles, as well as three selections from their newly released set, my favorite brewery in all of NYS, amazing atmosphere, great group of guys, this was my first bottle release and everyone was super inviting

Amazing hidden gem. It's a true craft brewery that does things the way they should be. You never get tired of a beer on tap and they are always trying newer and better things. The inside just got a facelift, with a concrete countertop and exposed brick; you feel at home...

This is a great brewery for a lot of reasons. The top being that they have great beers. They subscribe to the idea that they should always have on a couple repeats and the rest should be new ones. This is nice because you are constantly able to sample old and new favorites. Also, the dudes who work there are just cool. They are fun to talk to about beer, both theirs and others, politics, life, etc. The place is rather unassuming, as their main focus is beer and conversation, not a trendy looking hot spot. Their barrel-aged beers have been stellar, many good hoppy offerings, but their stouts are my favorite.

This is a reference almost no one will get, but Endicott reminded me of Rock Falls, Illinois in the late 1990s. It's small but it doesn't feel oppressively small. The downtown is still old timey, with storefronts dating from at least the early twentieth century and some old facades still up, but this oldness doesn't feel scary or abandoned like it does in most dying or dead Midwestern towns. These shops have been care for. Things still happen there.

One such storefront, which looks deceptively small from the outside, houses the North Brewery, the surprise stars of the 2015 Extreme Beer Fest. Their facility is quite large for an old commercial storefront--it might have been a small department store, back in the day. It is woody and clean and nicely worn. Very sparse, too: the bar doesn't even have stools or places to sit.

The vibe feels genuine, is what I'm getting at, absolutely unplanned and unpretentious. These people are way more concerned about their beer than they are about anything else. At too many new breweries, craft beer is an investment opportunity, a way of riding a rapidly ascending cultural wave. This has led to a slew of homogeneous, antiseptic brewers, aesthetically manicured places that attract monied illiterates and pump out mediocre beer. You don't get that here. Hiring a designer never even crossed these dudes' minds.

So instead of some magazine spread decor, you get excellent beer and good goddamn people. Call me old fashioned, but that's the way it should be.

The selection wasn't super wide (only 5-6 options), but every style was done perfectly. The beer is very contemporary, tending toward large hop profiles and higher ABVs, but more English influenced that most newer breweries. The French Kiss was the second-best maple beer I've ever had, after only Mornin' Delight, and the Prime IPA was so loaded with sediment it was like licking the bottom of a pack of whole leaf Centennial hops.

By far one of the best breweries Iv ever been to. Such wild and crazy selections to. Always changing. Always good. Everyone must try this place. Such a hidden gem.

Always something new at The North! One of my favorite places and always a favorite brewery of mine. Whether you want hops, stouts, browns, or blondes, they've got it all. Could not recommend more!

Awesome selections, ever changing! They do an excellent job, my favorite is their IPAs and stouts!