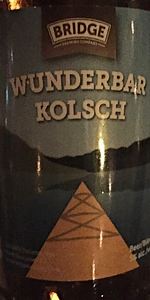 Notes: A craft beer that’s interesting and complex while still light and refreshing, our Wunderbar Kolsch is a flavourful take on a German Kolsch. It offers up a lager malt profile fermented with an ale yeast and made with German noble hops. Now available in 6 packs. Prost!
View: More Beers | Place Reviews
Recent ratings and reviews. | Log in to view more ratings + sorting options.
Rated: 3.81 by TheNakedLunch from Canada (BC)

Reviewed by Borbly from Canada ()

Reviewed by staubot from Canada (MB)

Poured from a large 650 ml bottle into a proper Kolch glass brought back from Germany. Came out hazy with a good one finger head which lasted the whole time and I milked that last of the glass so it held up for over half an hour. Smelled of hops and light malt but nothing special. Bit of a of a lighter than the style it was made after and with more malt in the taste than Id expected. Still it was a fair version of Kolsh but not perfect. Feel was smooth and fresh without too much carbonation and was what id except from a Kolsch. Not bad go at the name but if you are going to advertise it as a Kolsch and not "Kolsh Style" you have to be more spot on or you'll be chased out of Koln. Still a good drink.

This beer pours a hazy, pale golden yellow hue, with one chubby finger of puffy, finely foamy, and yet somewhat bubbly bone-white head, which leaves some exploding water plume lace around the glass as it gently recedes.

The carbonation is quite active in its sharp and probing frothiness, the body on the light side of medium weight, and sort of smooth, that yeasty and hoppy edge doing a number here. It finishes barely off-dry, the grainy and biscuity malt more or less shedding its sweetness, while the laid-back old-school hops take up the slack.

Overall, a fairly well-made version of the style, light, but substantial all the same. Maybe a touch too much (AC/DC!) general acridity mars things a tad, but it's easy to dismiss in the long, bomber-killing run, as the sun reappears on my long-suffering backyard deck.

Rated by Toddem from Canada (BC)