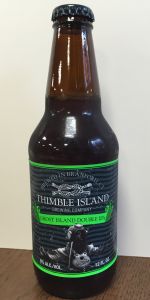 Notes via stream of consciousness: It's poured a very hazy golden/amber colored body beneath two fingers worth of rocky off-white foam. The hops in the aroma are limited, even for a double IPA where there's usually more maltiness involved, and in all honesty there's not a lot of maltiness here either. I'm getting some orange, grapefruit, and a little bit of biscuity and lightly caramelish malt but it's not bright. The taste is fuller than the aroma as usual but not by a whole lot. The grain is sweetish with biscuity, bready, lightly caramelish, and subtly honey-like notes. The hops are gently citrusy with notes of orange, grapefruit, and even a bit of lemon-lime. There's a good amount of apple there as well which is probably coming from the yeast but you never really know, and some grassiness, resin, and underlying herbs. The combination of citrusy and yeasty fruitiness with the maltiness that they've created is nice as everything balances really well. It's solidly bitter, and it finishes dry with just a drip of maltiness, some apple-like fruitiness, and mildly spicy, earthy, grassy, and herbal hop notes lingering. It's only 8% but there is an alcoholic presence to it, and it becomes visible in the lingering finish, perhaps imparting the spiciness that I'm picking up as opposed to hops. In the mouth it's medium bodied and gently crisp. The head held up quite well at the outset but has since dwindles a bit but it's left some great lacing behind. Although I know that this is intended as a west coast IPA it reminds me in many ways of an English IPA (they're making some more modern versions these days) because it's not a flavor and aroma whallop which leaves it much more accessible and highly quaffable. The only problem with that is that at 8% it remains a 'knock you upside the head' beer so you need to be careful. I could go for more of this!
Review #8,190

3.99/5  rDev +1.3%
look: 4.25 | smell: 4 | taste: 4 | feel: 3.75 | overall: 4
From a pint can, first into a clear Imperial pint glass it goes. The brew is a bright and relatively translucent copper-amber. A copious off-white head is supplied, one that's tightly packed and endures. The aroma is starchy and hoppy, much like most IIPAs, but there's a little greenness and lack of dimensions to it. That aspect readily sums up the drinking experience. There is a malty body and a hoppy bite and both are pleasantly earthy, but not outstanding. It drinks smoothly enough, with a disguised ABV, but not to exception. A four pack was so modestly priced, it had to be tried. That is a decision not at all regretted.
Jan 14, 2022
Rated: 4.04 by PaulSlazinger from Pennsylvania

Rated by tradershmulie from Connecticut

Bought some for others - had 1 left.

Reviewed by Jason from Massachusetts

Mild haziness but I can pretty much see through it, lacing is spectacular while it leaves a trail down the glass. Smells of oranges, stone fruit, crackers, nutty grain, & a faint booziness. Smooth and a bit creamy, you know there is some malt there which I love. Balance is keep with the DIPA style and with the amount of bitterness to malt to alcohol all being there this beer shows that the brewers took care. Beers like this make me want to cross over the border on a regular basis.

Rated by rdilauro from Connecticut

Reviewed by Tomstrees from Connecticut

Reviewed by Fieceheart from Connecticut

4.13/5  rDev +4.8%
look: 4 | smell: 4 | taste: 4.25 | feel: 4.25 | overall: 4
I got this beer about two months ago it has been stored in the fridge until I had time to consume it. I am in the mood to drink IPA's tonight I will start with this one. The beer is 45 degrees and served in a tulip glass. After I cracked opened the can it began to spew its lovely contents all over. The label on the beer is impressive, reminds me of the video game bio shock. The beer poured a beautiful copper orange with amber hues. The head produced by this beer is bright white and one finger thick. The head is foamy and creamy with average retention. The clarity is slightly hazy. Overall, this beer is gorgeous.

The flavors in the beer are bready, lemons, grass, bay leaves, resin, pine, grapefruit, biscuit, a subtle malty sweetness, oranges, and a hint of pineapple.

The mouthfeel of the beer is creamy yet dry and astringent.

The body of the beer is medium-plus, medium-plus carbonation, and a full finish.

A fantastic IPA, I would have like to taste more hops profile in the beer. The beer does have an excellent malt backbone. The beer is flavorful and a must-try for hop heads.

Rated by CodyBasden from Texas

Reviewed by Astromaster from Connecticut

Rated by poeticthots from New York

Reviewed by KidFrosty from Connecticut

Reviewed by mnrider from Connecticut

Reviewed by DrewSnyc667 from Massachusetts

S - orange zest, pine, strawberry, slightest bit of metal and alcohol to remind you that you’re about to have a DIPA.

T - Juicy citrus fruits and sticky sweet molasses. Tastes like biting right into a not yet ripe orange.

M - a touch creamy, makes for a somewhat more sophisticsted DIPA; somewhat softer on the tongue.

O - a big surprise from this one! Very enjoyable and surprisingly easy drinking and refreshing.

T: restrained; pine up front; bitterness kicks in mid-palate with a little sweet citrus; a little lemon rind bitterness in the finish;

O: not very complex, but nice to drink none the less;

Reviewed by YoungMtn52 from New York

Reviewed by mike22ne from Massachusetts

Looks good, slight hazy amber, with a good light head that fades but maintains a fine layer of bubbles.
Smell and taste are good hops, pine resin and grapefruit rind citrus. A bit of caramel malt holds the base up.
Feel is pretty good. I like the stiff resiny bitterness but there's a bit of a sharp edge that detracts a little.