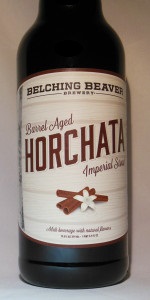 4.45/5  rDev +1.4%
look: 4.5 | smell: 4.5 | taste: 4.5 | feel: 4 | overall: 4.5
A pour that is purely black props up a substantial tan head that coats the glass as you enjoy this beer. The Templeton barrel is notable on the nose, but it is in balance with the significant char notes that accompany the chocolate, cinnamon, and vanilla aromas. Wow. Just wow.

The taste picks up all the notes mentioned above, with the cinnamon especially taking the lead, and if anything the barrel is lurking in the weeds - and as I drink this, I can literally feel it sneaking up on me. Stealthy barrel indeed.

My only wish is for a fuller mouthfeel - it’s too spritzy for a beer this big and flavorful. But this is still a magnificent stout.

Near black with a half inch medium brown head dissipating quickly.

Nose: horchata character is extremely forward - tons of cinnamon and vanilla. The rye barrel is there but doesn’t penetrate the horchata much (although it is much more apparent than in the rye barrel Mexican chocolate peanut butter stout)

Taste: Follows the nose. Rice milk, vanilla, and cinnamon up front followed by rye whiskey. Horchata component is absolutely on point. Finish is sweet but definitely not cloying.

Feel: medium to light body, medium carbonation. A touch light and overcarbed for my taste but very drinkable for the abv

4.21/5  rDev -4.1%
look: 4 | smell: 4.25 | taste: 4.25 | feel: 4 | overall: 4.25
Poured into a Fremont small snifter. Pours a very dark mahogany brown, appearing opaque black in the glass with a thin, fizzy brown head that dissipates quickly to a ring around the glass with light, slippery lacing. Aroma of dark toasted malt, cinnamon, cocoa, vanilla and a hint of whisky. Flavor is semi-sweet dark toasted malt, vanilla, cinnamon, a hint of coffee and light rye whiskey. Medium bodied with sharp, active carbontion, skirting on the edge of overcarbonation. The fizzy start made me a little leery of this stout, but the aroma was a fair replication of horchata with some dark malt added. The flavor is very well done, the horchata component is spot-on. Although I'm fond of horchata, I've never had it with any alcohol in it, and have to say the rye whiskey is a very nice companion. As a matter of fact, the malt, horchata vanilla/cinnamon and whiskey are in harmony. The whiskey flavor is tame for a barrel aged stout, but in this case that is the perfect level of flavor as it does not overpower the delicate horchata notes. I liked the sounds of this, but expected to be a bit disappointed due to the barreling on top of horchata flavoring. I'm very much relieved that this is so nicely balanced and flavorful. A bit on the sweet side, but that suits me fine and appropriate for the presentation. The body is a little light for an imperial stout and the high carbonation was unexpected, but everything really works well. Nicely done.
Jun 01, 2018

Reviewed by Jmj408 from California