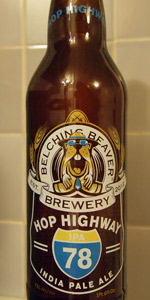 Notes: We brewed this beer In honor of the City of Vista's 50-year anniversary, naming it after the Hop Highway (CA Highway 78) which connects a string of fantastic North County San Diego breweries.

This West Coast India Pale Ale is loaded with Galaxy, Nelson, Mosaic and Citra hops, bursting with aromas of citrus and passionfruit, making this a coast-to-coast favorite. We're very proud to say this brew was awarded as one of the country’s top 50 IPA's. Good times to you my friend, and welcome to the Beaver family.

Love this beer. Gets me pretty right after a six pack beacuse it's such easy drinking I drink them so fast. Smooth citrusy slight mango but very much hop forward. Like a quintessential IPA with the bitterness dialed back in place of more fruit. Biggest redeeming quality though is that you don't have to ISO all over Instagram to get it.

Hey, now this is when things start to get interesting! Not only is the beer quite fantastic but also it has this relation to Highway 78 that made me think of the old historical Route 66 in Inland CA (although Vista is right there near the coast near Oceanside/Carlsbad).
Galaxy, Nelson, Mosaic and Citra are loaded to an extent (perhaps Citra and Mosaic) that give the beer a kind of raw hoppy feel that I loved. Other than that it is quite punchy and citrusy (love the hoppiness in the aroma!) with subtle bitterness with a semi-light body that equals easy drinkability.
Great beer, would love to try more from Belching Beaver.

This is a good fairly mild and thirst quenching IPA but it is not my favorite IPA.

Decent IPA that's perhaps a bit too heavy on the grainy malt and floral hops for my personal taste, but still has some nice citrus notes and a light, piney bitterness to it.

Poured from a 12 oz can with an illegible date stamp. Light haze with a small but dense head. Aroma of tropical fruit, citrus, and a moderate dankness. Flavor is likewise hoppy but bitterness is on the low side. Disappointed this is not a true West Coast IPA. Fruity and citrus flavors with a bit of weed thrown in that gives some interest. Really enjoyable body that is smooth and full but still a little feisty in carbonation.

Nice crisp, clean, juicy IPA that was a pleasure to drink. Pours a light yellow-orange, slightly hazy color with a little lingering white head and spotty lacing. Nice aromas of juicy citrus fruit zest hops, as well as some weaker floral and piney hops. Tastes of lots of fruit zest - pineapple, grapefruit, passionfruit, orange, lemon, tangerine - as well as weaker floral and piney hops, malt, caramel and bread. Nice mild bitter bite at the end, good balance between the hoppiness and sweetness. Smooth thin mouthfeel, good carbonation. A really enjoyable offering and it was just the right amount of juiciness and flavor without being too sweet.

Today’s flight is an intriguing one in that I’m eschewing my personal rule of beginning with the lowest ABV beer and going up, this time I’m starting with the highest ABV brew and going down. Why? I’m overriding it with the “lightest to darkest” rule. In this case I’m beginning with Belching Beaver’s Hop Highway IPA – a 7.3% ABV American IPA. Let’s talk about Belching Beaver, I’ve only had their Peanut Butter Milk Stout thus far, but I was suitably impressed with that beer (apart from a strange solvent taste that only occurred in the US bomber-sized bottle, I’ve since had it in cans and that solvent taste is gone so who knows WTF that was). Freshness with US brewed IPAs is a problem in Oz, so I’m expecting hop fade here FYI.

Poured from a 355ml can into a nonic pint.

S: Stone-fruits and unripened (read: sour) passionfruit are the big players here. Solid bready/biscuit malt base provides a solid base for this West Coast IPA that isn’t heavy on the piney/citrus hops one would expect from this region. Hints of floral hops come through in further whiffs. Not a fresh IPA by any stretch of the imagination… date on the bottom says 5th April 2018, yep: hop fade expected. 7/10.

T: Sour unripened passionfruit tang upfront leads into a green cannabis hint, grapefruit and rockmelon (cantaloupe for US readers) hop characters are supported throughout by a bready/dry cracker malt base. Finishes with a pithy dry and slightly bitter melon note. Aftertaste is oddly earthy for this intriguing IPA – certainly the flavours encountered are not your typical IPA flavours, but it all works rather well and is moreish enough. 7/10.

M: Medium bodied with a nice dense carbonation, Belching Beaver definitely got the mouthfeel down, ironically I didn’t belch at all while drinking this. 8/10.

D: Solid IPA, nothing brilliant about it but no major negatives either. The flavour profile is different from other American IPAs, which helps with IPA fatigue: if you’re over all those West Coast IPAs and NEIPAs this could be a nice diversion into a fairly unique flavour profile. Also the 7.3% ABV doesn’t come across much at all, it’s flavoursome without being in your face. Nice work Belching. Still reckon they’re more of a dark beer brewer [I’ve a theory on this]. 8/10.

Food match: Pizza, something with prosciutto ;)

Golden and clear. Head is very dense and has staying power. I had to scoop our a lot of the head cause it wasn't going anywhere fast. Nose is less hoppy than I had hoped. First taste was hoppy and clean. I had high hopes for more hop flavors. Good beer.

22oz bottle - part of a swath of new offerings from this Socal operation now available in Wild Rose Country.

This beer pours a hazy, pale golden yellow colour, with a voluminous amount of puffy, rocky, and chunky off-white head, which leaves some high flying cirrus cloud form lace around the glass as it very lazily recedes.

The carbonation is fairly stringent in its palate-pinging frothiness, the body a solid middleweight, and more or less smooth, as the hops here, once again, have the temerity to actually be sociable. It finishes trending dry, the west coast hops reclaiming their barely lost position.

Overall, this is a standard (and I mean that in a very complimentary manner) version of the style, with lots of varied hoppy essences assaulting my well accustomed tastebuds. I know that this is all about a highway that I have never driven, but I am currently reminiscing about one of those mentioned in the Canadian 1990s musical canon. Hey Tom Cochrane!

Pours a slightly hazy pale gold with a nice head of about 2 inches. Head is slow to break and there is decent lacing. The smell is quite mellow, with tropical fruits coming in, and some fairly aggressive malts. Flavor is okay with the nose carrying through. I found the beer sweet from the malts and I assume advanced age of product. The feel was medium weight with lower carbonation.

I wasn't expecting the world with this one, and good thing. It is a passable beer, but I do wonder what it would have been like fresh.

Poured into glass from 22 oz bottle. Cloudy amber colour with a slight off white head. Mellow aroma. Taste lightly hoppy with a malt undertaste and slight grass due to the hops. Goes down smooth. Prost!

A decent IPA, however this brew reeks of chocolate and caramel malts. Perhaps of decent gravity, this brew is largely stale, heavy, and unremarkable. This brew is a balanced ale, and maybe reliable, but nothing special.

A clear light orange with a dense, white head with good retention and nice lacing, this looks solid. The nose is a muddled mess, a blend of grapefruit, pine and a noticeable chalky sweetness, not unlike a Calcium supplement. Moderately sweet with some caramel present. The palate is rather awful. thin, sweet, medicinal, mildly bitter, stale hops... blech! And i thought i'd had a rough night @ Great Notion. This beer is _terrible_. Way too watery, not bitter enough, the aspirin note is cringe-worthy and the hop character is disappointing. Drainpour.

Poured into a 13 oz tulip glass not sure when it was canned, but it definitely tastes fresh. Pours a slightly cloudy orange with a 2 inch sticky white head that leaves behind rings of lace.

Taste follows nicely with pine and tangerine upfront and a big hit of grapefruit in the slightly dry and bitter finish.

Overall this is a very nice IPA with a great name.

Disappointed in this one, feels extremely light for a 7.3% IPA. Not a whole lot of flavor either, I've liked all the other belching beaver beers I've tried, this one by far the worst.

A- pours a hazy golden-orange color with a two-finger creamy and frothy off-white head that retains long after the pour, leaving some lacing behind

S- piney and citrus hop aroma with doughy and bready malt underneath, a bit of grassy aroma as well

T- taste follows the nose up front, citrus and pine hop flavors, followed by some juicy tropical notes, bready and grainy malt finish with lingers of grass and tropical fruit

O- a little malty, but some nice tropical hop notes coming through

Round 3-Flavor
Ultra citrus flavors and in your face hops

Round 5-Packaging
Every “Beaver” in the breweries beer line-up features its mascot as a different character based on the beer’s name. In this case, the Beaver is a highway patrol officer. The front label is fun, simple, and clean. The back label explains how the beer was born.

cool extra from a glass trade, enjoyed from a Willie b. murky orange w a big foamy head, classic look, nice lace. nose and taste is a caramel hop. a bit resinous, a bit sweet, with a nice malt backbone. super solid. easy drinker, nice ipa if not a bit too sweet and a bit tamed back on the hop blast. enjoyable though. better than your avg bear.

Pours a thick, hazy gold. I like hazy ipas. I find them appealing. The nose is good. Tropical. Papaya, cantelop, peach. The flavor is well balanced. Not super complex, but not disappointing either. It's a solid beer.

3.25 S: Surprisingly herbal with wildflowers and lemongrass. Smells almost like a saison. Dry citrus and peach underneath. Bready yeastiness and hints of caramel.

3.25 T: Tastes like it smells. Big herbal per above. Lots of peach, some lemon, hints of papaya. Again bready yeast and a like caramel maltiness.

Poured a honey, dark pale, hazy color with 4-to-5 fingers of frothy, white head. Could see some light bubble streams coming up from the bottom of the glass. Very nice layered, foamy lacing along the sides of the glass. Good retention. (Sight - 4.00)

I had this in a taster flight awhile back and gave it a 4. It was nowhere near that tonight. Still have five left unfortunately. (Overall - 3.50)


Hop Highway from Belching Beaver Brewery
Beer rating: 86 out of 100 with 214 ratings