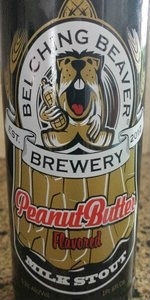 Notes: America’s Favorite Peanut Butter Milk Stout: this silky-smooth beer put us on the map. Troy came up with the idea of combining Peanut Butter with our Beaver’s Milk Stout and he nailed it. Don’t let the dark color fool you, this beer is delightfully easy to drink with cascading aromas of roasted peanuts, dark chocolate and coffee.
View: Beers | Place Reviews
Reviews: 214 | Ratings: 1,178 | Log in to view all ratings and sort

This beer poured a dark cold brew brown. The head was about a finger thick and was khaki colored, however, I thought the head was pretty weak and had very little retention to it.

Super pleased with the aroma as I got big notes of peanut butter in the front, almost like you're smelling a nutter butter. This wasn't as one note as I expected, as I got pleasant notes of chocolate and coffee in the back-end. The front aroma of the peanut butter also kinda reminded me of cashews and cookie butter.

The taste more or less follows the nose with a higher presence of sweetness from the malts in the front. The peanut butter is very prominent upfront, but then this evolves to a more chocolaty taste in the middle. I felt like there was a popcorn kernel-like taste to this beer towards the finish and aftertaste which were coupled with a more mellow taste of peanut butter.

This stout was medium to full bodied and was high in carbonation. This was pretty smooth to drink and had no bitterness in the aftertaste.

This beer tastes exactly how you would imagine it to taste. If you love peanut butter and you love beer then this is the beer for you. If there was such a thing as dessert beer then maybe this should be renamed as such. It is smooth, sweet and has a perfect hop balance. A definite "must try" try if you are into dark beers. Nice work BBB.

Pours a very dark brown that would be clear is not so dark. Chocolate milk colored, very rocky brown head.

Aroma is peanut butter, of course. Also smells of sour chocolate milk that builds in sourness the more I drink it.

Flavor is PB, but less pronounced than the nose. Some notes that remind me of cheap, weak coffee. Chocolate notes that work well with the PB. A dark fruit like sweetness. Sour milk from the aroma is also present. Also, it's sweet.

Mouthfeel is kind of aqueous. Sticky sugar thing as well. Moderate carbonation. Didn't notice the alcohol at all.

Overall, it was fine at first, but the sour milk thing just kept getting worse and worse. A difficult recommendation, unless you are just somebody that really enjoys peanut butter beers and won't get turned off by the sour milk thing.

Not sure how this one gets such high ratings as it is hardly drinkable compared to other peanut butter stouts. Peanut butter tastes old/fake. Chalky cocoa. Bland.

Pours black with a creamy tan head, the nose is peanut butter and chocolate.

In other words, a Reese’s Peanut Butter cup in a beer. Wow.

The peanut butter is very forward on the taste, but the chocolate flavor is the perfect complement to balance this magnificent milk stout. World class, IMHO.

Man, this is a good beer... Not too aggressively flavored; just the right amount of sweetness; great balance of carbonation and viscosity. Goes down so smooth; I never drained a pint so fast, lol.

I would love to rate this beer well, and almost did due to peer pressure (other ratings). It's bad. You can taste the grit from the PB2 Powder, which there is way too much of. The head is low, but I can say that it is wet and holds its temperature. If you aren't well versed in your peanut butter stouts, and want a wet beer, this could be the one. If you are, look elsewhere.

Poured from 12oz can into a pint glass. Pours a dark brown, almost black with about a half inch of copper/golden head that dissipated within about 15-20 seconds.

Smell: strong peanut butter aroma here that is extremely pleasant. Not getting much chocolate here but the peanut butter smell is so good that i wasn’t bothered by the unidimensional aroma.

Feel: I’m not getting the creamy feel that others are getting, but it’s medium-bodied nonetheless. No lighter or heavier than you’d expect from a stout.

Overall: If you’re into flavored stouts I would definitely recommend checking this out. Easy drinking at 5.3% while still tasting like a flavored stout should.

Not bad for a stout, the smell is top notch, the taste is amazing especially the after smell, doesn’t really get you buzzed but it sure is a great beer

This is the beer which got me into flavored stouts. I was always very anti-flavored beers, thinking most were a gimmick. In my defense ten years ago, they were gimmicks where the flavoring was mostly artificial. Now, the flavorings are generally real with coffee, chocolate and even genuine junior mints or fruit by the foot being used in the brewing process.

This drinks like a Reeces cup. The chocolate and the peanut butter don't fight each other and combine perfectly. The beer is smooth and sweet. On draft, you do get a much better taste. In the can there is a slight soy sauce taste which takes the can version down a notch. Given that Belching Beaver is very hard to find outside of San Diego, I rarely get this in its most perfect form on draft.

The scent of this beer is mostly peanut butter and the chocolate is lost here. It's not quite offputting but smells like when you cook peanut butter and it gives off a different odor. The beer pours the color of soy sauce, a dark black with a beautiful tan foam head which almost looks like peanut butter whipped cream.

The mouthfeel is smooth and creamy, almost like a Guiness. Overall, this is just a perfect combination of peanut butter and chocolate ... and was an early entry into flavored stouts, they have been doing it for at least a decade. While others have caught up and maybe surpassed this beer, even 5 years ago chocolate peanut butter stouts were almost non-existant. Today, they are everywhere.

I would take this on draft over KBS any day of the week. I realize my review will likely be much higher than the average rating but what can I say? I know what I like ... and I like this.

Pours black with brown highlights, wispy light brown head of large bubbles receded quickly to nothing, no stickage on the glass. Chocolate and nuts mostly in the aroma and flavor, its like liquid Ferrero Rocher. Perhaps its how the peanuts combine with the oats, but it comes across more like hazlenut than peanut.

Tasty beer candy. Quite rich. Definitely a dessert on its own, would probably pair well with ice cream. Just like a ferrero rocher or a peanut butter cup, I can get down on 1 or 2 when the craving strikes.

"No way am I drinking beer with peanut butter in it." At least that's what I said before my son pushed this on me. Glad that he did.

From tap and can into a shaker pint. A beautiful dark stout but with a head that quickly disappears. The aroma is....pretty much peanut butter. You have to fight hard to smell anything but peanuts and a hint of roasted malt and chocolate. The taste is initially hops/malt/peanuts that quickly gives way to a heavier peanut, chocolate and coffee flavor. The feel is what a milk stout should be...smooth and creamy.

Not an everyday beer but just what the doctor ordered when I get a craving for a PB stout.

12oz can served in a tulip. Beer is completely black in color and forms a nice brown head which rapidly falls. Sweet peanut butter chocolate aroma. Flavor is milky and sweet and carries a solid load of peanut flavor. A delicious dessert beer.

bottle poured into a chalice

Discovered this delicious dark beer at Yard House in Las Vegas. I think I’m in love and addicted. Truly has a wonderful mixture of peanut butter and chocolate, but not so unnatural that one doesn’t know they’re drinking a delicious beer

Pitch black, one finger mocha head
Aroma of peanut butter, milk, cocoa
The taste follows with a quite dry impression
The mouthfeel is thin and moderatly carbonated
Overall not really a dessert beer despites the peanut added

Bomber, bottled on 2/5/18. Pours opaque black with a small dark brown head. Aroma is peanut butter, chocolate, and sweet malt. Taste is basically the same. I passed this one over a few times because peanut butter beer didn’t sound good but I’m glad I finally tried it. Peanut butter isn’t my go to beer flavor but it’s not bad and I can see it pairing well with some foods.

Poured from a can with small tan head and solid dark body. Smells of coffee and peanut butter. Taste is of coffee, like a ground bean with none of the gritty texture, very smooth, and an undercurrent of peanut. I expected more of a peanut butter flavor. Regardless, I enjoyed the smooth taste and feel.

Hmmm...not good. I looked for a date on the bottle but none was to be found - hoping that this was a fluke bad beer from a brewery I respect. I love peanut butter and I love stouts so I had high hopes for this beer. And the high ratings here got me excited. Alas, I was sorely disappointed. Started off good - nice dark brown color with loads of fluffy tan head and some dissipating sheets of lingering lacing. Smells strongly of peanut butter, but with a little sourness and some weaker malt flavors. Barely any chocolate or coffee aromas. The taste wasn’t good though - that sour artificial peanut flavor dominated, and overwhelmed any other notes of malt, coffee, chocolate, caramel or vanilla. Too acidic and sour, with a thin slightly creamy mouthfeel and good carbonation. Would have been great if only the taste were more balanced and not so sour.