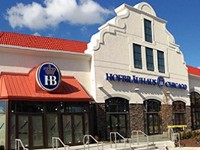 This place is a blast! Awesome real German food in a huge bierhall that plays live German Music. I also love the German beer. Super friendly people in which the Beir wenches will paddle your ass, and it does hurt! A must!

One of the anchors of the manufactured tourist destination of Park Place in Rosemont. They brew on site, and the brew deck is right behind the bar, in all of it's chromed glory. This place is huge, with an outdoor patio for 100, and seating for several hundred indoors. It's an isolated place and not really a destination, oddly enough no one I know locally has been here. Inside it's dark wood clad with a few deer heads, and HB decor sparsely around the place. At the bar, no staff was there for 10 minutes, but eventually there was decent service. A perpetual oompah band playing the hits, even with alpenhorns that were played on the bar eventually.

Food was pretty basic, not the best. Pretzel seemed frozen, the obatzda was mostly cheddary cheese dip which was weird, not the traditional camembert and onion. Glad to see schweinbauch on the menu but it was just pork belly with kraut.

Can't say I really enjoyed it here, but i'm not the target audience I suppose. You could do a lot worse in Rosemont. It was St. Pattys and there were a bunch of douchey middle aged tourists hollering at the bar to no one in particular. Seemed like the place to be for large tourist groups.

For authentic German food, check out Resi's Bierstube, Laschet's Inn, or even Das Radler. For a local brewery, Short Fuse is half a mile down the road. For the burbs, the Biergarten in Hoffman Estates does a lot more with much less.

Traditional German style beer hall with capacity for 500 guests. There is also an outdoor beer garden and an event room. The quality of the beer was good but not great. Our server was very friendly and helpful. The selection of beers is limited 3 classic Bavarian beers and 3 seasonal beers. The food is prepared quickly, tasted good and the portions were generous.

Just what you would hope for from an authentic German brew house. You walk in to a small gift shop in the front. Prices are not outrageous. I picked up a Hofbräus mug that was expansive but I also got two of their 6 packs for 20 bucks so not to bad there although the bottles are 11.5 oz.. The dining area is a large open room with traditional pew style booths and tables and the bar over looks the room from the front. All of the servers are dressed in German attire and the whole atmosphere makes you think you've stepped out of Midwestern Illinois, over the pond and into Germany. Didn't try the food but I definitely want to go back to do so. Service at the bar was quick and all their brews on tap were delicious. Wide variety and selection.

The atmosphere is typical of an authentic German beer hall, complete with huge wooden tables and live music. The food was pretty tasty as well, I had an enormous soft pretzel and a sausage sampler (what else would you order in a German beer hall?) We had my dad's birthday party here once and it worked out great, due to the huge open

They only sell Hofbrauhaus beer (no guest drafts) and there are usually about 4-5 choices. The Original, Dunkel, Hefeweizen, and a seasonal of some kind are usually available. You can order either .5 liter or 1 liter drafts. I believe 1 liter was around $12, so it's not all that cheap, but there is just something fun about holding a giant liter of beer once in a while and the beer is all good.

Hofbräuhaus Chicago in Rosemont, IL
Brewery rating: 3.84 out of 5 with 31 ratings