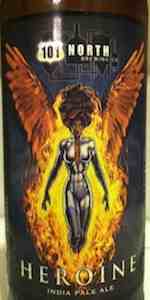 Notes: Immodest hop additions throughout the brewing process characterize this distinctive, amber colored NorCal fashioned India Pale Ale. With an ABV of 7.2% galvanized by a total of 64 IBU’s, we were obliged to create an IPA that would distinguish itself as immortal amongst the common, and with an unforgettable name. We believe we have done just that. Heroine India Pale Ale. A pint of help is on her way.
View: Beers | Place Reviews
Reviews: 20 | Ratings: 127 | Log in to view all ratings and sort
Reviews by travolta:

Nose: Not much going on, simple hops. Not impressive.

taste: Coppery, metallic, smooth hop oils, well balanced with a malty finish. Medicinal all of the way through and watery, but clean.

Notes: Malt too unbalanced to be good, or to stand out. Mouthfeel is weak and unoriginal.

Pours a thin head on a clear straw body.
The aroma is mild grain and lemon.
The taste is more malty sweet with a balanced hop profile. Lemon bitterness.
The texture is medium and softer.
An enjoyable malty IPA.

This pours a light tan straw color. Light hop aroma which just doesn’t excite me. Dial up the hops—or at least give me more of a hop presence. Curiously, I picked up a spiced curry note on the flavor. Turmeric in particular. It has a pleasing bitterness with a piney finish. Perfectly decent IPA but it’s going to get lost in a sea of excellent IPAs out here.

Pours out amber with orange around the edges. The head is off white and smaller than expected, there is plenty of visible carbonation. Lace retention is nice, sticks around for a while.

Pale and caramel malts start the smell. Some spice and citrus follow with a hint of pine. Not really West Coast, or NorCal as described, but still smell like a pretty good IPA.

Interesting, almost roasted caramel start, quickly followed by citrus. It's more of an orange peel than a fruit citrus. Some grassy hops and pine aftertaste show up. There is a spicy note to this, the good gentleman at Healthy Spirits thought it might be Rye. I think he might be right. Whatever it is that adds that spicy kick, it's a nice addition. Carbonation is a little heavy for the thickness of the beer, but not terrible.

No real complaints. I may grab one again, wouldn't be bummed if I saw it on tap. But also not going to make the list of favorites. Sad I missed their brewery night during SF Beer Week. They got the time wrong online and I chose another meet the brewer night.

4/28/13. I actually got a reply on my Instagram post of the beer from the brewer. No rye, the spice comes from the hop blend. Love how many brewery's are on Instagram, beerporn everywhere!

Smells bordering on a red/amber ale with hints of wet paper.

The hops are strong up front, but fairly easy drinking for a higher alcohol IPA.

With an abundance of good IPAs these days, it's tough to be noticeable in a good way and this one doesn't really stand out from the pack for me.

Pours a dark amber with some head that dissipated somewhat. I don't like this beer at all. The taste/look/feel took me back ten years to the IPA scene and feel like this beer should evolve in the wake of all these amazing brews out now. I tried my best to get any sort of flavor profile mentioned below but just kept on getting this overpowering scent/taste of stale toasted malt.

Not a fan of the dank, slightly fecund flavor, nor the graphics or the verbage.
A) Deep hazed brownish tawn color. After an initial half finger it sits laceless, headless, dull.
S: Spiced hops with funky and grassy herbals and not much tropical fruit. Over ripe, slight decay, on a heavy malt base.
T: Taste follows the smell with an almost ENGLISH STYLE of dark bready malt biscuit balanced with spicy, fecund, grassy hop. A funky mix of grass with spice as well as over ripened tropical fruit on the side of an island road.
M: The mouth is largely creamy with astringent and drying, peppery finale. Odd.