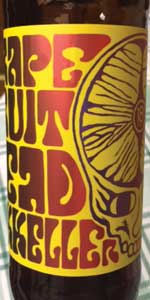 Caramel & grapefruit flavors up front; banana notes on the finish. No booze heat.

Oddly mild but easy to drink; good, not great.

Smell: Smells like a grapefruit squeeze, pith and juice

Taste: Grapefruit juice and pith, with shortbread malt tones underneath; quite bitter, after the swallow, with the resultant aspirin bitterness overwhelming the flavor profile

Overall: Appropriately named, this is a nice, older style DIPA but it does have that aspirin tone I often get from Amarillo hops - I would score it higher if the fruit tones were dominant in the finish

Thanks, TravisMason, for the opportunity

Slightly hazy orange color with off-white head. Aroma has overripe citrus fruits and sweet malts, even a kind of flour flavor. Medium body and carbonation, slightly boozy on the finish. Overall it's a decent DIPA but nothing to remember.

12oz can
$6.25 single from Pats Liquor
This one was a big surprise. Pours a very deep gold or light orange with a soft pillowy foam topping. Very sweet, like a grapefruit hard candy. The hops back it up and linger. Well balanced.

12 oz beers were poured into a sniffer.

Appearance: A one finger head was poured that reduced to a thin layer. It is an amber orange color with some clarity and vision of bubbles coming up through the glass. Spotty lacing down the glass as the beer was drank.

Smell: Getting some citrus and lemon from the Amarillo hops. Nice caramel, doughy, and biscuity hops with warm alcohol in the rear.

Taste: The hop flavor is definitely there, but there is a heavy alcohol note to the beer and a light bitterness tingly throughout the palate.

Overall: Not a bad collaboration beer. A bit steep for a 4 pack and was expecting a bit more hop flavor and smoother alcohol finish.

Drank this out of a can the day it was released.

Great beer. Great name. Pours orange/amber with a head you'd expect from a DIPA, though it disappears quickly. Smell is incredible - taste a tad less but tastes like the name - grapefruit hoppiness explodes. Really good. A little bitter at the end but not much. Thick mouthfeel that I loved.

Appearance - The beer was a cloudy orange color with a modest white head.

Smell - The beer is well named. There is a big grapefruit bomb exploding in the aroma.

Taste - On the initial taste, one gets a mouth full of grapefruit rind with the skunkiness of the hops. The resins assault the tongue, but become distracted by the happy citrus balance. The aftertaste is bitter, but enjoyable. Despite not having a high ABV, the beer is moderately warming.

Mouthfeel - The thickness clings to the sides of tongue, allowing for the bitter assault.

Overall - I still have not had Devil with the Devil, so this stands as my favorite hoppy offering from 18th Street.

This one poured out as a hazy orange color with a decent white head on top. The smell was pretty strong with citrus. The taste was balanced with the sweetness of the malt and the bitterness of the hops. The feel was pretty smooth. Overall it was a pretty good brew.