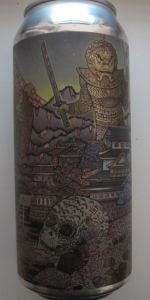 Notes: Here is a father’s toast to his son. Brewed with cocoa nibs and lactose, Hunter boasts a creamy texture and rich chocolate flavor. Vanilla, roast, and caramel sweetness are met with a bright hop bitterness.
View: Beers | Place Reviews
Reviews: 61 | Ratings: 336 | Log in to view all ratings and sort
Reviews by FBarber:

Pours a pitch shiny black color - completely opaque. Beer appears very viscous and thick coming out of the can. Thin tan head lingers but eventually dissipates only to reappear. No lacing.

Smell has notes of roasted malts, chocolate, lactose sugars, and a touch of creamer.

Taste follows the nose with rich notes of roasted malts, cacao, milk chocolate giving way to a roasted malt backbone. Hint of sweetness comes from the lactose sugars and milk chocolate flavors. Slightly, yet pleasantly bitter finish from the buttering hops provides a nice balance to the sweet milk.

Overall a lovely stout from 18th street. Really nice balance that captures the best of both Imperial and milk Stouts. Definitely a beer worth savoring again and again.

Appearance: Dark brown to black body with a beige ring of bubbles around the edges.

Taste/Mouthfeel: Sweet chocolate and vanilla with a slight bitterness that rounds out the sweetness. Nice smooth feel to this one, creamy and slick, yet a thickness to it that leaves all those flavors on the tongue, coating it with chocolate and almost coffee like flavors.

Overall: I hugely enjoyable beer that is reminiscent of 3F Moloko. This one has that great thickness to it with out being too heavy, a sweetness up front with a nice hop bitterness at the end to round it out. Really enjoyable.

Pretty tasty milk stout. Has a sweeter cocoa taste with some vanilla. Lots of flavor!

Smell is roasty malt with a background that's kind of sweet and slightly tangy sour.

Going off that sour scent, the first taste made me think that it was infected because the tang was really overwhelming. But as I'm drinking the Vanilla and Coffee Hunters in a mini-horizontal with this one, when I came back to it after the other two, it seemed like the tang went away. Either way, it's a pretty straight forward milk stout. There's plenty of roasty malt on it as well as a chocolatey sweetness in the middle and then a slight bit of bitterness on the back end.

As for feel, it's smooth and velvety but it also has just the right amount of oiliness.

It's a very well balanced and tasty beer.

I remember when getting the Hunter series meant having to either finding the right beer stores in Chicago or driving all the way to the brewery in Indiana, so I was really happy when 18th started distributing out here in the Southwest suburbs. I've been seeing plenty of their ales around here recently, so I can't wait for the Hunters to come back around here.

I picked a few of these up at the brewery from the last release. Black, and I mean just complete darkness. Heavy malt and bitter chocolate just mellowed on the tongue. Thick and velvety texture with minimal carbonation. Dangerously easy to drink, even on a warm summer night!

Like the bottle says, its very creamy. The only downside would be the chocolate taste for menis a bit overpowering. Would like more bitterness & hops to shine through. If you prefer something a bit easier to drink I recommend Left Hand Milk Stout. It has a cow on a purple label.

Appearance: Black in colour with a one finger creamy brown head that had ok retention but no lacing.

Aroma: Roasted malts, chocolate and cocoa with hints of vanilla and nuttiness.

Taste: Similar to the aroma with roasted malts, chocolate, cocoa, vanilla and caramel with a light char. Also a nice light sweetness throughout.