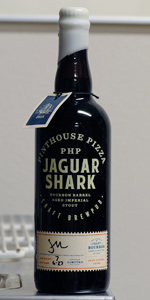 Ok tap at Brew and Brew. Roastiness, whiskey, chocolate and a touch of coffee on the nose. Mouthfeel on point, nice and rich. Taste is oak, whiskey, chocolate fudge. Would love to see what these guys do next, so far every IPA and this have been completely on point. Some of the most exciting beers being made in Texas without a doubt.

Well, looks like my take on this beer is going to be very different from those who've rated it before me.

L: Poured thinner than expected. A deep brown, transparent pour. Much darker once poured and settled in glass. No light through. Foamy, airy, mocha two-finger head. Bubbles rest on top. Nice legs on the glass as it's moved about. Despite the thin pour, looks very nice in a glass.

S: Smelled whiskey immediately on the pour. Chocolate tries to assert itself but quickly fades to sweet vanilla and earthy oak. Nice barrel character that hits up front and throughout as chocolate and slight roast struggle to shine through. Also, there is a unique smell to it. Call me crazy, but it's an almost flat coke hint of sweetness in there. Its not unpleasant, though.

T: Holy ROASTED MALT. Where was this on the nose? Roast. Some chocolate. Barrel, unlike on the nose, doesn't really show itself until the middle-back of the palate. Not as much vanilla/sweetness on the taste - more whiskey. It's heavy, heavy roast. Along with that, a very bitter finish. Unfortunately...it's an astringent bitterness. Not particularly enjoyable for me personally.

F: Thinner than I care for, or is ideal for the style. The mouthfeel on this isn't anything I would have noticed one way or the other (good or bad) had I not been rating the beer. It's okay.

O: I had much higher hopes for this BA Stout from Austin. It's not quite what I had built it up to be in my mind. This is a beer that looks good in a glass. It smells very inviting. For me, it stops there. Taste and mouthfeel bring this down from an A/A- beer to a B-/B. Oh well. A good effort, nonetheless.

Pours black with a frothy tan head. Lots of coffee on the nose. Some chocolate too. Doesn't smell too hot. Medium to full mouthfeel. Very easy yo drink.. Coffee and chocolate come back with some vanilla. Elegantly polished with bourbon. Long complex finish. Home run PHP!

This is the firkin with raspberries and fudge. Bring on the chocolate cake!
Looked like dark bourbon with a hint of red
Smelled of bourbon and something sweet
Tasted of rich whiskey(bourbon?), lightly sweet/taste raspberries.
Overall: Amazing!!