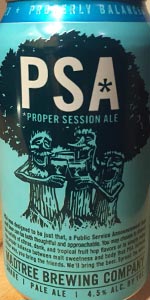 Notes: PSA was designed to be just that, a Public Service Announcement that craft beer can be both thoughtful and approachable. You may choose to dissect the variety of citrus, dank, and tropical fruit hop flavors or to simply enjoy the proper balance between malt sweetness and body that PSA delivers. Either way, you bring the friends. We’ll bring the beer. Spread the word.
View: Beers | Place Reviews
Reviews: 23 | Ratings: 95 | Log in to view all ratings and sort
Reviews by DenverHopHead:

Poured from a 12oz can with a canned on date of 8/22/18; into a pub glass.
Appearance- gold with dense carbonation bubbles that support a thick, pillowy off-white head that leaves thick, sticky lacing!
Smell- sharp hop forward aromas of citrus, pine and grass!
Taste- mimics the nose with a mildly aggressive hop flavor profile of pine forest, freshly mowed grass and orange zest and grapefruit rind!
Feel - mild body for 4.5%, much more like a 5-6% APA or IPA which is nice as it lacks the watered down feel many sessions tend to have!
Overall- if you’re looking for a kick back day drinking beer, this one is a winner!

Crisp, Citrus, Refreshing, Balanced
I’ll admit it proudly, we all need those beers that we can pound back, or, more respectfully, “have a proper session with.” Sadly, many so-called Session Ales are just watery impressions of a trendy style. Thankfully that is not the case with PSA. This well balanced, juicy, and crisp APA dangles a whole lot of flavor over the palate, and the body is light enough to keep the drinkability high. I wasn’t really worried about the hop character with this one, even before my first sip the aroma of hops drew me in. The maltiness comes through as well though, with some complexity that pulled me in even further. I can’t get enough. [Jason]

I procured a slew of CANs for The CANQuest (tm) during a BCCA CANvention & I am slowly getting them out of the backlog and into the roto.

From the CAN: "PSA was designed to be just that, a Public Service Announcement that craft beer can be both thoughtful and approachable. You may choose to dissect the variety of citrus, dank, and tropical fruit hop flavors or to simply enjoy the proper balance between malt sweetness and body that PSA delivers. Either way, you bring the friends. We’ll bring the beer. Spread the word."; "Share"; "Profusely Hopped * Properly Balanced * Perfectly Sessionable"; "Illustration/Design: Rebel Pilgrim[;] Tree Mark: Christopher Daniel[;] CAN Design: John Pattison".

The Crack! instantly unleashed some nearly unCANtrollable foaming through the vent initially until I got it to a point that I could allow it some calming time. I then CANucted a gentle Glug, followed by an in-glass swirl, producing a finger of foamy, tawny head with limited retention. Color was a lightly-hazy Amber (SRM = > 7, < 9), although it may be attributable to a chill haze. Nose definitely had an up-front dankness, along with pine, mango, pineapple and a slight woodiness. Mouthfeel was medium. The taste was flavorful, but it would be difficult to "dissect" all of the flavors involved. Suffice it to say that if beers brewed with AmeriCAN hops are your thing, then you will definitely enjoy it. I am one of those types, but it just seemed like a riotous jumble of flavors to try to parse. It had all of the usual suspects of pine, tropical fruits & citrusy flavors, but they seemed to be tumbling over one another before I could really get a hold on one versus another. Finish was dry with a definite hops bite. It was a pretty good session ale, but I was now ready for a beer.

Pours golden in color with nice head retention. It has a piney, citrusy nose. Great tasting. This tastes and feels more like a full strength IPA than it does a session ale. Mad props to MadTree for this session ale rendition, it's one of the better session ales I've had in a while... as long as it's fresh. After 2 months or so the hops fall out and this one turns to straight cereal grain. Although fresh, it's pretty dang good!

A: The beer is hazy amber yellow in color—too hazy to see if there is any visible carbonation. It poured with a half finger high white head that died down, leaving a thin layer of bubbles on the surface and lots of lacing down the sides of the glass.
S: Moderate aromas of citrus and tropical fruit hops are present in the nose—oranges seem to stand out in particular along with notes of mangos.
T: The taste follows the smell and has flavors of oranges, mangos, and papayas with a light amount of bitterness.
M: It feels a bit shy of being medium-bodied on the palate and is crisp with a moderate amount of carbonation.
O: The lighter-bodied nature of this beer makes it very drinkable, but it is remarkably aromatic and flavorful for a sessionable IPA.

Mild pine aroma, pours a slightly hazy amber with a white head. More bitterness in the flavor then is hinted at by the aroma. Light bodied, with a crisp bitter finish. A perfectly sessionable beer, although a bit basic.

A: Pours a relatively clear light to medium golden honey in color with moderate amounts of active visible carbonation rising quickly from the bottom of the glass and faint medium golden yellow colored highlights. The beer has a two finger tall sudsy foamy white head that reduces to a small patch of thin film surrounded by a large patch of very thin film covering the remainder of the surface of the beer and a thin ring at the edges of the glass. Significant amounts of lacing are observed.

S: Moderate aromas of citrus/orange, tropical/mango, and tropical/papaya hops over the top of light aromas of grainy + biscuit + lightly toasted malts with a hint of grainy sweetness.

T: Upfront there are slightly heavier than light flavors of grainy + biscuit + lightly toasted malts with a hint of grainy sweetness. That is followed by light to moderate flavors of citrus/orange, tropical/mango, and tropical/papaya hops which impart a light amount of lingering bitterness.

O: Easy to drink with well hidden alcohol and a nice crisp refreshing mouthfeel. Enjoyable with a pleasant hop profile and a decent amount of malt complexity for such an easy drinker. Definitely could put down a couple of these.

12 FL. OZ. can
Served in a MadTree becker glass

The smell is a citrus medley.

The taste is more dank and pine. The malt really doesn't come through like I expected.

This is a nice beer. It doesn't pretend to be a watered down IPA. It is a flavorful pale ale that I could drink a metric shit ton of.

On Tap at South Park Tavern, Dayton. Served in a 10oz stemmed glass since I asked for a half pour.

Overall/Drinkability: A no frills, but hoppy American Pale Ale, which worked for me with a slice or two of pizza over a quick business discussion before I went back to work. I would have had a larger glass had I not as much work to do, and wouldn't have minded a full serving, but I don't think I'd want more than one. So in a way, it's a proper session ale isn't it? You have one beer at that session and you're done.