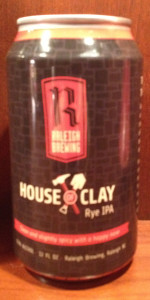 Poured from a tap at Raleigh Brewing into a pint glass.
Appears orangish amber with a nice white foamy head that lasted and good lacing.
Smells bready, spicy, citrus.
Taste follows the nose.
Mouth feel is medium plus for the style.
Overall a very nice American IPA that I would definitely order again.

My first Raleigh Brewing Co. beer.Pours into an impy nonic a hazy deep burnt orange infused goden with a billowing creamy-like slight off white head.Some spicy rye and light earthy hops in the nose,there is some lactic qualities comeing from the rye.Earty and dry with spicy rye on the palate,to me it could be a rye porter if I was blindfolded and drinking it,somewhat creamy as it goes down easily.Not bad and the alcohol is pretty well hidden,damn it has porter qualities to it though.

Appearance: cloudy amber in color with a 1/2" head that lasts a bit.

Smell: some bready aroma is all I can detect.

Overall: this seemed a bit unbalanced and a bit too much bite here.

IPA or a Rye Beer? I don't know...I'm going to call it an IPA since that's primarily what they call it. Dry hopped with Falconer's Flight.

Hazy gold color beneath a thick, frothy head. Excellent retention and lace. Nice floral and citrus hop aromas upfront with a notable dry hop grassiness, tangerine, some sweetness. Fresh citrusy hop flavor over a sweet malt base. Light spiciness, leafy notes, and some pine needle bitterness. Gets a little sweet about halfway through. Medium bodied, drying, and bitter. This has a nice hoppiness, but I think if they dialed it back to under 7% and/or cut back on the sweeter malts, it would we better.

Appearance: Arrives with a hazy amber color and a modest cap that leaves some spots here and there

Smell: Earthy, with touches of citrus, pepper and bread

Taste: Bready, up front, with the hops and the rye adding bitterness, earthiness and some peppery tones in the middle; nicely balanced through the finish, though a bit grainy in the aftertaste

Overall: A nice IPA with the twist of rye; I look forward to trying other beers from this brewery

Poured a somewhat auburn shaded brown body with two finger head and lace patches. The aroma has its hoppy characteristics but the rye is noticeable. Beer is smooth, easy to drink, and I liked it but just not too much going on. The rye and citric hops are balanced and there is a bit of sweetness but nothing takes charge nor does anything really stand out...basically a lit bit of everything. Must say, though, what little bit of everything is used is used correctly and they get the most out of it.

Beer #2 in an NC beers only tasting, thanks to Benny (styleisking).

[Appearance: 3.5] The off-white head is a tightly bubbled cap about half a finger tall that sits pretty strongly on a red-hued amber colored brew. Brightness and clarity are high. Lacing is patchy in moderation.
[Aroma: 4.0] Everything meshes here, and the rye adds the nice big spiciness and earth alongside a heavy dark breads going along with the resinous bitterness.
[Flavor: 3.75] Earthy, peppery and hoppy, it almost hits the mark set by the aroma, but there's a bit too much of a note of spent grains lingering. Otherwise, it's well hopped and has a raw nature that works well for certain IPAs.
[Mouthfeel: 4.0] The medium body holds up, with a crispness that doesn't cut the smoothness. The graininess doesn't overburden the feel, and the spiciness added by the rye imparts itself to it while refraining from weighing it down to give depth.

From a can of House of Clay at the Burning Can Festival (NC).

Amber body. I was told this was a pale ale but it seemed too robust for style to the point of being readily mistaken for an IPA ... so the bold hoppy aroma and flavor is actually on style.
Dank, hoppy aroma - seems a bit off but may be the rye, which I was unaware of at the time.
Moderately bitter, very hoppy flavor.

Had this a second (and third) time and found it to be horribly underattenuated with little hop character. I wonder if RBC is cutting corners to keep up with demand...