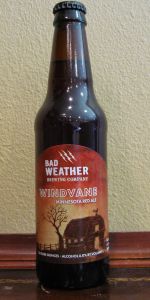 Notes: Our flagship year-round release WINDVANE stands strong through all types of weather and is a great fit for all seasons. Pouring a deep brilliant red, this is your go-to beer. If you want something hoppy, you definitely have it. American hops give WINDVANE a swift bitterness with piney, citrus and resinous flavors. If you want something with strong malt shoulders, you have that too. Roast malt layers add complexity and keeps the beer dry to showcase the hops.
View: More Beers | Place Reviews
Recent ratings and reviews. | Log in to view more ratings + sorting options.
Ratings by zenwatts:

Rated by zenwatts from Minnesota

Reviewed by AdmiralOzone from Minnesota

4.18/5  rDev +8.9%
look: 4 | smell: 4 | taste: 4.25 | feel: 4.25 | overall: 4.25
12oz can. Can bottom is stamped 'CANNED ON 01/20/21'. Bought as a single at France 44.
Brilliantly clear, deep amber colored body. Skinny finger of off white head settles back to an interrupted cap. Leaves spots and interrupted sheets of lacing.
Aroma is rye malt and piney hops.
Taste is spicy rye malt, and the hops express mostly pine but with a little citrus. There is the mix of spicy caramel to the bitter pine, and the sweeter citrus. More of the hops in the after taste.
Medium plus mouth feel, with a bit of syrup. Very good carbonation.
I like this beer because it presents a clear palate of malt and hops, with some bitterness, some sweetness, and some spicy caramel. Rye malt always speaks to me. Even with some age this beer expresses well and clear.

Appearance: Pours a clear, but deep and darkened auburn color with a tall and thick off-white head. (4.25)

Flavor: Follows with more dank herbs with a faint orange citrus sweetness in the middle before it finishes into a somewhat bitter, but nearly sour, citrus and orange malt sweetness.

Feel: Medium-bodied. Moderate carbonation. Finishes with a balanced feel on the palate

Compared to Grain Belt Nordeast Amber 11/2/20: Pours a much darker color. Much stronger hops on the aroma. Bigger, hoppier, heavier, and sweeter.

Overall: Yes, I am drinking this beer about a year old, so it has far expired. I suppose that's why I get less hop flavor here. Still, I don't get much of the malts and I'm not getting any red amber malts either. Hard to judge because this one is expired, so sorry. Might revisit this one fresh. (Current Rating: 3.36)

3.87/5  rDev +0.8%
look: 4 | smell: 3.75 | taste: 4 | feel: 3.75 | overall: 3.75
I tried this at The News Room in downtown Minneapolis whilst in town for a work conference. The beer poured a slightly hazy amber and had thin white head that did not leave much lacing. The scent had subtle citrus fruit notes. The taste was nicely balanced and easy to drink with malt base and slight bitter fruit finish. The mouthfeel was lighter in body with good carbonation. Overall its a solid beer.
Sep 30, 2019

A: The beer is crystal clear amber in color and has a moderate amount of visible carbonation. It poured with a short white head that left a large patch of white bubbles on the surface and lacing down the sides of the glass.
S: Light to moderate aromas of caramel malts and herbal hops are present in the nose.
T: The taste follows the smell and has flavors of caramel and toffee malts and herbal hops. There is a light to moderate amount of bitterness.
M: It feels medium-bodied and a little crisp on the palate with a moderate amount of carbonation.
O: This is like a lighter version of a West Coast IPA.

Taste is similar to the aroma, also very pleasing. Just a little whine of an off flavor -- something not quite right comes across as medicinal and/or vegetable. Not enough to spoil the beer.

Mouthfeel is medium bodied and satisfying. Overall, this is a pretty good beer.

Reviewed by ssimpson89 from Illinois

Reviewed by NilocRellim from Minnesota

Some boozy licorice going on here, along with piney citrus, copper malts, and fig.

A little too stale and hoppy for my tastes, but comes out with some raisin notes, followed by citrus pith, pine, red grapefruit, bread crusts, metal.

Feel is kind of sticky but dry and scratchy throughout. Like a bad cough.

Overall, another beer I'll maybe not finish and not buy again. It's okay, but nothing noteworthy.

Reviewed by bsp77 from Minnesota

3.75/5  rDev -2.3%
look: 3.75 | smell: 3.75 | taste: 3.75 | feel: 3.75 | overall: 3.75
every brewery seems to make an amber, especially the new guys. its a style that usually appeals to the novices and the craft connoisseurs alike, so its usually on the beer list. the style generally doesnt do a whole lot for me, but this is an awesome one. i love that it still has all that rich red malt flavor, but is so dry in the finish that its almost like a different beer altogether than what i am used to. no lingering sweetness at all here, just a really zippy hoppy push and then its gone. almost like an irish red in the base, the grain is less caramelized and more earthy, but it still has the brown sugar and fresh baked elements i look for. its hop profile is pretty cool though, grapefruit splashy and christmas come to mind, but its not abrasive and ends up being a real easy drinking pint with a ton of carbonation and an almost mouthwatering thirst for more arising after each sip. i was really impressed with the overall quality of this one, and of the beers i had from these guys in general. not very often i contemplate ordering a second amber beer, so props to this one!
Oct 31, 2015
Windvane from Bad Weather Brewing Company
Beer rating: 86 out of 100 with 132 ratings