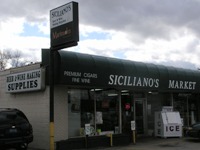 View: Place Reviews
Reviews: 117 | Ratings: 182 | Log in to view all ratings and sort
Reviews by Mscarpen:

I've been up to Grand Rapids twice in the past month and have made it a point to stop by the top bottle shop in GR, Siciliano's, while visiting.

Siciliano's had a broad range of Domestic and International bottles and a participatory good selection of Belgians. The shop only sells by the bottle, which makes their shelves of 4-packs and 6-packs a bit pricey.

Both times I've stopped in, I've had a hard time finding anything terrible exceptional. Like many shops, I'm sure they get some whales in from time to time, which probably vaporize within hours but even in talking to the staff, I was told they simply don't have much of that kind of stuff and I should keep an eye on their Twitter feed.

I agree that its without a doubt the best bottle shop in the area, but on par with other shops in the Midwest, I think it's a bit below the A+ its been given on BA. Perhaps their rather large Home Brew shop lifts their score... but as a bottle shop, I've seen stores more deserving of such a high score.

Such an awesome place. Great selection of sours and Michigan beers. Very helpful staff, took time to make me feel welcomed and had nice genuine conversation when checking out. Awesome spot for home brewers. Wish I had a store back home like this.

Friendly staff that asked me more than once if I needed help. The fact that all 6 packs are priced per bottle is just insanely awesome for someone like me who just wants to try lots of different beers. Really nice selection. Only complaint is that it could be better organized, but perhaps that's part of the charm.

Not many beer stores have shelves loaded with beer both domestic and international flavors not to mention a giant beer cooler filled with even more in the back of the store. This place has everything. I mostly come here for the homebrew ingredients and supplies however. And they have never disappointed. Even when there were some unheard of grains such as the Optic strain which I was looking for they said they could look into ordering it for me and assured me the Golden Promise would serve as an excellent substitute (typically used for malting scotch) which it did. I've made a lot of great beers thanks to the help of the Siciliano's staff and owe them a lot for their hard work and dedication to helping customers brew the beer they want to drink.

Pluses are parking, selection, ability to break up 6 paks, cleanliness, friendliness.Offsetting this is the smallness of the place, that many beers were past shelf life really.Prices not the lowest.