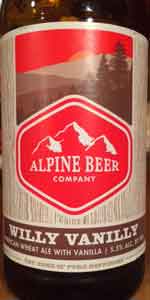 Notes: The base for this beer is Willy Wheat. They add Vanilla to the tanks during aging. Try mixing it with Alpine's Captain Stout for a Captain & Vanille.
Draft availability only.
View: Beers | Place Reviews
Reviews: 65 | Ratings: 294 | Log in to view all ratings and sort
Reviews by TheLongBeachBum:

A recent visit to the Alpine Beer Company with fellow BAs xlperro and EyeChartBrew, on 12th July 2003, gave me the opportunity to try several of the ABC beers that are not yet bottled (though this may alter). They are currently available to buy here in 5, or 15.5, Gallon Kegs, or just for filling up an ABC Growler which you can purchase for $5 and fill for $7.

Appearance: Light brown in appearance, had a very light haze to it.

Nose: Vanilla beans are the most obvious characteristic of the nose, but they are in no way overpowering. They merge well with the wheat aspects of the original Willy Beer.

Taste: Light wheat beer intermingled with Vanilla Beans that balance well, but it is rather one dimensional at times. However, the trick is getting the Vanilla to balance the tastes of the host Willy beer, which in itself is quite an achievement. It does have a lovely appealing character.

Mouthfeel: Average, given its relatively low strength, but the mouthfeel is clean, crisp and nicely structured.

Drinkability: Given the fact that the Vanilla was not over powering, this beer had the Drinkability of the Willy beer, mixed with the additional enticing flavors of the Vanilla Bean. At 4.9%ABV, it was easily imbibed without leaving any annoying lingering flavors.

Overall: The fourth and last of my ABC samples, I had left the Willy Vanilly until last, just in case they had overloaded the beer, so I would avoid overloading my palate with the bean taste. No such fear! All of my crappy English jokes about the band Milli Vanilli were understood but failed to raise a smile, but this beer most certainly did. It might be perceived as an experimental beer, or even a variant of an existing base beer, but it works! And it works extremely well. Well worth a try.

From look and feel, this is a pretty good wheat beer, basically as one would expect from a brewery with the pedigree that Alpine has. The head retention is fair, the color is hazy and clean, all in all, it's almost a textbook APWA - that is, in look and feel.

Taste and Aroma, however, are the outliers. The taste is pure vanilla (no shock based on the name) but not cloying or hot as might be expected. The aroma reminds me of baking cookies as a child.

Overall, this beer is wonderful.

Light clear golden pour, limited white, almost fizzy head that dissipated quickly and almost completely. More grainy than bready, not picking up much vanilla. Sweet grainy taste with a late vanilla punch that seemed artificial. Kinda sharp feel with a bit of a lingering hop. Overall I would give them credit for creativity but it really did not seem to work, everything seemed out of balance.

Lots of vanilla with a hint of floral hops.

T - A pretty standard pale wheat, with vanilla notes that heighten the sweetness. Mild bitterness in the close.

M - Thin, a bit of lingering dryness in the close.

O - Decently crafted but not my thing.