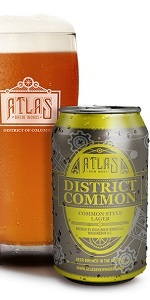 2.01/5  rDev -43.4%
look: 3 | smell: 2 | taste: 1.75 | feel: 2.5 | overall: 2
April 12th, 2016 - I've never heard of a "Common Style Lager" and I don't think it's in the most recent BJCP but my best guess is that this belongs to some category or another of pale lager. And that initial sweetness upon opening the can of Corn Pops (do they still sell it in the cereal aisle?). The flavor is heavier, but still sweet and syrupy that, like a traveling carnival, ruins the cleanliness of the style. And the aftertaste accents this, with just a touch of hops to remind me this is a beer and not a soda.
Aug 20, 2020

From the CAN: "Beer Brewed In the District"; "Science of District Common[:] Pair With[:] * Lemon Chicken * Local Oysters * Pork Medallions[;] 12° P[,] 20 IBU[,] 8 SRM"; "Hancock Fountain Pen[:] Uncovered in the catacombs of Beacon Hill, the Hancock estate of Boston, this pen scratched the first signature of a new nation, and forever transformed our forefathers from British Heretics to Brave Heroes."

I beCAN with a Crack! of the vent, followed by a slow, gentle C-Line Glug into the awaiting glass. I was deeply heartened as it foamed up to form just under two fingers of dense, foamy, rocky, tawny head with very good retention. Color was an oh-so-slightly-hazy Amber (SRM = > 7, < 9). Nose was VERY malty, more bready than biscuity, with a pronounced nuttiness, like almonds. Think almond cake! Mmm. Mouthfeel was rather full, almost syrupy, HUGE for a Lager! The taste had a nutty sweetness, more like a Vienna Lager than whatever I was expecting from the nose. I'd like to revise to almond biscotti as opposed to almond cake. The almond flavor remained prevalent throughout, but the maltiness was drier and more biscuity than the nose had led me to expect. Finish was semi-dry & still rather malty. This seemed to cry out for a pretzel acCANpaniment. YMMV.

3.65/5  rDev +2.8%
look: 3.5 | smell: 3.5 | taste: 3.75 | feel: 3.5 | overall: 3.75
12oz can, about 2 months old (freshest I could find in DC). Poured into a pint glass. Pours a slightly opaque, cloudy darker golden-copper body, one finger white head, good retention and no lacing. Smell is crisp bready malt, mineral, floral notes, a bit grainy. Flavour follows, very drinkable and approachable bready sweetness, touch of floral, a bit of lemon zest, but ultimately mineral and malt sweetness dominates. Although, it's not cloying or too sweet, given the grassy/floral bite the hops provide. Mouthfeel is lighter bodied, good depth, easy to drink and appropriately carbonated. Good summer beer for sure, an appropriately balanced lager with a good malt character in the background.
Mar 21, 2018
Rated: 4 by ArnoldBlumenthal from Maryland

Malt driven, obviously, with a thin texture and lots of carbonation. Simple but interesting, with lemon lezt in the aftertaste. I can see this going nicely with seafood or chicken, in place of white wine. Also, this would fit well in very hot weather. Unfortunately, there is snow on the ground at the moment. Worth a try.