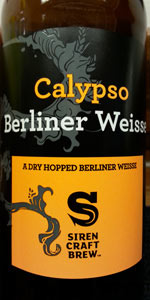 Notes: Calypso was the goddess known for her sharp tongue. This beer is our homage to this enchantress, a tart, spritz u Berliner style sour beer that is liberally dry hopped with a different single hop for each batch. To know which hop you are drinking, check out website and match the batch number to the hop.
View: Beers | Place Reviews
Reviews: 17 | Ratings: 80 | Log in to view all ratings and sort

330ml bottle from Brewdog.com (£1.82):
Really light golden to start with a watery appearance through the body & quite a small, bubbly white head that looks pretty poor in truth. The nose was quite sour & tangy with some citrus & background fruits coming through alongside some orange. It was definitely a sour offering with plenty of lemon & citrus flavours but it thankfully didn't overpower. The palate was a tangy & lively one without being overly carbonated, & overall the beer was drinkable but not particularly exciting; coupled with the fact that I'm not a huge fan of this style of beer, I doubt this is one I'd pick up again.

A: Poured into a tulip glass to a light straw yellow topped by a finger of dense white head that fades slowly to a collar around the edge of the glass with minimal lacing
S: Smells of light sourness along with some grassy and slightly herbal hop notes
T: Taste is nice lemony tartness up front with some light hearbal hops with some slight earthy notes along with a little tropical fruit. Hints of creamy wheat at times as well. The swallow brings lingering lemony tartness and some faint hop flavors along with some slight wheat on the back end.
M: The beer has a fairly light mouthfeel but it is not watery. Carbonation is effervescent as well and the acidity leads this one to have a dry finish
O: Overall this is a pretty tasty berliner. Definitely a nice beer to have on a hot day like today. It has some nice flavors and complexity and the dry hopping makes this one pleasantly different. If you like the style this one is worth a try.

From 32GP. In Teku glass. At lunch, with fried eggs + fries + turkey steaks. Hops arent much noticeable, maybe they help in controling the sourness, as I find it more tolerable and refreshing than others in the style

Batch 614
Hazy straw, tart mango and citrus all along. Very refreshing. I don't know what the hops used are (the batch is not listed on their website yet) but they're very delicate. Good berliner weisse

Tasted in a 12 oz snifter from draught at Firkin on June 24, 2016. Enigma hop. Look is gold with a white head and lingering lacing. Smell and taste are mostly sour.

On tap at craft beer co. In Covent garden. Loved this beer, cloudy body, funky, tart nose with substantial stinky cheesiness. Just enough to tempt me without crossing over the line as some Berliners are want to do. Medium light body, decent sourness but not overwhelmingly puckering; there are lovely brackish notes and hoppy bitterness along with a little of that cheesiness; more subtle than in the nose though.

Just one of many terrific beers I've had by Siren this week, super impressed.

On tap at Alfie Byrne’s, Dublin.
No head over bright dark brass. 3.75
Lots of orange, slight tartness, and some caramel. 3.75
Apricot, some clean acid, a bit of herb, stoney fruit and a citrus hit. 4
Hoppy herbal green finish and dry linger.
Light and lean, slight cling. 3.75

Crisp and hoppy, with slight acetic over lactic. Nice and easy, but why the fuss? I understand they rotate the hops, so it’d be nice to know the batch no., along with the usual how long this sat on tap. But, like all Siren, more bark than bite. 3.75

Unfortunate add for my 1900th.

Had the batch brewed with Citra. It tasted and smelled it. What a lovely beer and from an unexpected and new source. These guys are on it and I look forward to trying more from them soon. Who would have thought such nicely hoppy and carbonated beer would be coming out of the UK...

Batch 631 - Centennial & Sorachi Ace. Clear bright yellow color with a bit of white foam. Aroma is really fresh and fruity. I get lemon, lime, unripe yellow plums but also a sweet vanilla note. Taste starts tart and lemony but not too sour or acidic, really smooth and fruity. Medium body and carbonation. Really good one, tart but not acidic, fruity and refreshing.

Holy hell, you could smell this thing from a mile away, and I'm not sure I've got a more vivid evoking of citrus fruit than with this one. Tartness for days. It's all a bit "big", but it's also quite tasty.

Look: Dark, golden yellow and slightly hazy due to the sediment in the bottle.
Off-white head which settles down to a lumpy, foam cap and leaves significant amounts of lacing on the glass. Looks pretty good.

Smell: Like a cross between an IPA and a gueuze. Seriously. There's a ton of hop character in there, with massive amounts of citrus, tropical fruits and pine
resin but there's also a vaguely funky undertone like a Belgian sour or saison. It's not quite as pronounced as those, but it's still there. Really rather intriguing.

Taste: Just as well that I like sours because this is, well, sour. Hoppy and sour. The sourness is a bit apple-vinegary, but the underlying hoppiness cuts through it all like something very sharp indeed - lemon, orange, passion fruit and flowery, resiny hops are all there in spades. I'm not overly familiar with the Berlinerweisse style, but if they're like this then bring 'em on.

Feel: Not as sour as, say, a gueuze, but still manages to be very dry and bitter. Don't be put off though, since this works beautifully. A fantastic late evening drink.

Overall: At the risk of sounding like a stuck record, Siren have done it again - this beer is what I imagine would happen if two of my favourite styles (gueuze and weissbier) got together and had babies. Whilst it's sour, it's not in the same sourness league as, say, Cantillon Rose de Gambrinus, but even so if you're expecting a more 'run of the mill' weissbier experience then you may be disappointed. Or surprised. Very good indeed.

weirdly underrated, this is fantastic beer, less a berliner, but still an excellent sour. it doesnt have that cold side souring component, apply, vinegar heavy, and stinky like wet socks. its more mature, more lambic-esque, a patient lacto property, and a lot of hops, which is what makes this so unique. for one, its a strain we dont see a ton of, a mix of citrus and tropicality, defined by radiant lemon notes and puckery passion fruit esters. the berliner base is really light, less wheaty than others, but so low in abv but so boldly flavored as to be the king of that stat. carbonated like a shaken up soda and super dry, the feel of this one is amazing, and there is a lot of bitterness for the style in the finish that make it distinct too. more mature than others, sour as heck, and juicy grassy leafy fresh hops, like a tonic of some kind, impressively designed and executed. i could drink this all day long, and hope to someday have that privilege. siren has been rocking so hard lately, and this is further proof of their rise. lucky enough to crush one of these on draft at backcountry pizza in boulder.

Pours a cloudy straw yellow color. White foam collar forms and leaves quickly. The aroma is slightly tart and wheaty. The flavor has a mild lemony tartness, wheat and citra hop bitterness. Light and crisp, some grapefruit rind and tartness lingering into the finish. Overall, this is a nice little beer.

A - Hazy golden with a medium white head that dissipates into a thin head and keeps well. Leaves bubbly lacing on the sides of the glass.

S - A bit of lacto, the hops do still cut through, some clean grassy tones, spring water