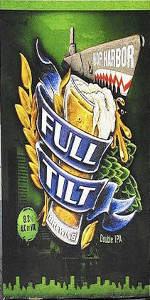 Undated bottle into pint glass. Pours a clear deep gold with an eggshell-coolored head that dissipates quickly. Really complex - citrus, floral, tropical fruit and pine with a strong malt backbone. Smooth and sweet - finishes with the impression of a sweet DIPA. Medium mouthfeel - actually kind of on the heavy side for a DIPA, but in a good way. Alcohol is well hidden. Very unusual and unique.

A highly drinkable Double IPA with suggestions of lime peel, pink peppercorn, and mango. Very warming, juicy soft hop resin, well balanced with some malt body, & a bitterness that proves they threw more than just a handful of hops at this brew. Pungent but not brash. A job well done!

Poured from the bottle into a Spiegelau IPA glass.

Real interesting color. Deep amber red, to bronze hued, with a good clear appearance and center rising carbonation. Head forms only about two fingers though, creamy and light tan and gives about a finger puck while slowly settling. Some nice cling ring lacing a bit as well.

Weird aroma. Mix of weed, butter pine and interesting wood florals. Quite unique I must say with a hint of sweetness, and a real "out there" hop bouquet, but it's kind of fun even though jarring on the nose.

Palate seems surprisingly light for a big IPA but manages to coat and bring the flavors nicely. Mild light caramel and some interesting biscuit tones. Real big tea leaf dry and tannic flavors in the mid palate that wash out quite quickly. Some hints of orange pekoe quality as well, a bit of herbal leaf notes that really seem to grown as the beer progresses.

A real different hop quality from nose to palate interestingly. It's sort of not quite my take, but a pretty unique one in the IPA realm.

Local DIPA. Pretty well balanced in the flavor and aroma with plenty of bitterness. Alcohol could be better hidden, and while there are some pleasant flavors of grain and fruits, I think this one needs some tweaking. For the ABV, I need more of a pay off.

Appearance: Pours a clearish copper color. The head is a finger high, with a creamy texture and an off-white shade. It also retains pretty well, leaving behind sticky webs of lacing as the head recedes. (3.75)

Smell: There's a nice pungency to the hops here. Not only am I getting piny, herbaceous hop notes, but also some tropical qualities as well. Despite the usage of Mosaic, I'm not getting much onion. Since it's a double IPA, the malt comes through with some caramel and toffee. It's a pretty typical DIPA, all told, but the execution is solid. (3.5)

Taste: Very fruity to start. Not only are there notes of tropical fruit (like mango and papaya), but some additional fruit punch and berries. The fruit flavors transition into more of a herbaceous, spicy note near the middle, while malts surge forward to balance the finish. These guys have utilized Mosaic well: the focus was on the fruity characteristics instead of the savory (read: onion) ones. Even better, there's just enough bitterness to close the flavor profile, and I do mean just enough. It's balanced, boldly hoppy, yet not bitter - exactly what I want from a DIPA. (3.75)

Mouthfeel: A bit heavier than I like my DIPAs to be, but nicely crisp. Personally, it's just a tad sweeter than I really like. Still, it's very drinkable for 8.3%. Carbonation is on the lower side without being nonexistent. (3.5)

Overall: This is a really nice DIPA. People in Maryland are talking about Jailbreak's Big Punisher as far as brand new MD-brewed DIPAs go, but this is far better in my book. It has a similar sweetly fruit-laden flavor profile, only it's far more balanced. It's not the best DIPA I've ever had (not even the best DIPA from Maryland, for that matter), but it's certainly a worthy addition to my usual rotation. (3.75)

Hop Harbor from Full Tilt Brewing
Beer rating: 88 out of 100 with 35 ratings