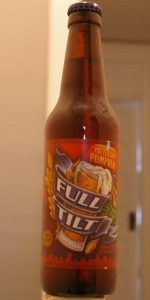 Notes:
View: Beers
Reviews: 13 | Ratings: 65 | Log in to view all ratings and sort
Reviews by MrWonka:

Am I really the only individual who thought this beer tasted awful? I don't even like to be/sound negative but this beer gave me no choice. Perhaps I bought a skunked 4-pk. It literally tasted almost like soap it was just gross. Maybe that's why there's still so much of it left at the liquor stores I go to? Idk, but what I do know, is that I won't b shelling out $ for another.

These are the pumpkin beers I live for if and only if I am in the mood for a pumpkin beer, with more and more Imperial Pumpkin ales coming out year to year it just makes me not want to drink anything lesser. Full Tilt brings it here, seeks out this brew and make it a part of the holidays or a pumpkin tasting.

I am slowly reducing the backlog here at Chez Woody, unearthing beers that had been purchased and set aside awaiting an approved pic and forgotten in the interim. I spoke with the Full Tilt people in BAL last fall and they are an enthusiastic group, to be sure. I picked this bottle up at The Friendly Greek Bottle Shop here in Lancaster, PA.

I Pop!ped the cap and gave it a fairly heavy-handed pour, resulting in two-plus fingers of foamy, tawny head with moderate retention. Color was a hazy Amber to Deep Amber/Light Copper (SRM = > 9, < 13). Nose had an almost perfume-y sweetness, unlike any Pumpkin beer that I can remember. The spices were there, but the cloying sweetness was front and center. Mouthfeel was full, thick, like a dollop on my tongue. The taste was much better than the nose! It had a really rich sweetness to it, belying what they had said about the hops addition, but the melange of spices worked well to somewhat dry it down. The alcohol was also quite noticeable, which may be off-putting to some drinkers of this style. Finish was somewhere in the grey area between semi-sweet and semi-dry. The alcohol and the spices helped to keep the sweetness in check, but the point at which one ends and the other picks up was blurred in this case.

'Tis the season. Another big offering, but this one fails to crack my top 5 pumpkin beers. One of the spices just jumps out a little more than I'd like, leading to unpleasant bitterness halfway through each gulp. Finishes ok, though still a little challenging to get through 12oz.

12oz bottle. Pours a deep copper, topped with a frothy slightly off-white head. This retains with a rich and creamy look, leaving back thick swathes of lacing. The aroma has a thick warm sweetness to it, which intermingles with a green mix of pumpkin and hops. Zesty spices are scattered throughout. The taste is similar, with a strong sticky sweetness that surrounds a core of pumpkin and hop flavors which are unfortunately coming off as a little vegetal feeling and leaves this raw and bitter on the finish. Spicing is solid and sticks to sweetness. I’m finding them to be strong but not overdone. The mouthfeel is fuller bodied with a firm crispness to the carbonation and then more of a slick creaminess on the edges. The strong alcohol shows itself in the flavors but for the size, this is actually fairly smooth as far as close to 10% ABV is concerned. This was a little rough around the edges in spots (with that high alcohol shining a spotlight on some of the problems) but with $8-9 for a 4-pack, I’d say that this is still worth checking out. Heck, with most Imperial Pumpkin bombers out there now running $7-8 for a bottle, this isn’t a bad deal for your pumpkin and high alcohol fix.

T: Sweet malt up front with a medium pumpkin savoryness following. Almost spicy, medium high bitterness. Fairly boozy in the back of the throat, warming. Quite bitter into the finish.

Not good, flavors are all over the place and a complete mess. Drain pour.

12oz bottle into a snifter. The brew appears a clear copper color with an off-white cap that fades leaving parchy lace. The head holds in a penline around the perimeter of the glass.

The aroma has a solvent kick of alcohol along with a little bit of fruit and pumpkin spices. The alcohol is the dominating attribute of the nose and while that isnt a terrible thing, it also isnt that enjoyable.

The taste is surprisingly hoppy and bitter. A little spicy but with a huge solvent alcohol impact that distracts from any underlying pumpkin or malt flavors.

This is a medium bodied brew with a moderate amount of carbonation. Surprisingly boozy and bitter. I was not the biggest fan of this; bigger isnt always better.