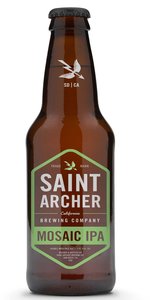 Notes: Mosaic is the first born child of Simcoe. Some have described it as Citra on steroids, but it’s much more than that; rich in mango, lemon, citrus, earthy pine, tropical fruit, herbal and stone fruit notes. With Mosaic hops and a compelling trio of Amarillo, Simcoe, and Chinook – this Mosaic double IPA is to be a sure winner in any double IPA enthusiast’s book.
View: Beers | Place Reviews
Reviews: 68 | Ratings: 360 | Log in to view all ratings and sort
Reviews by R_i_P:

Been drinking this DIPA every time I find it. Yeah, it's that good. Superb, in fact. Ralph's Supermarket here in California informed me this DIPA is winter seasonal only, but then I find 3 sixers today at Target. Go figure. Bought all 3. No hesitation.

This DIPA pours a beautiful straw color. Moderate carbonation with 1 finger of white foam. Smell is out of this world -- hops, pine, tropical fruits, citrus, grass and the perfect dank -- frinkin' heaven. The taste is the same -- smoothest damn DIPA you'll find for the price. I paid $6.99/sixer at Ralphs with their discount (buy 4 or more). Target was $4 more per sixer -- yeah, pricey -- I get that. Still, this DIPA is nearly half the price (at Ralphs) and vastly better tasting than either of Ballast Point's overpriced DIPAs (i.e., Manta Ray and Dorado).

Can't say enough good things about this DIPA. If you truly love DIPA's, this one's a keeper. Epic, in fact, for the price. Yeah, disagree all you want; it's a free country. Last comment -- buy the green six-pack cans, not the overpriced bombers, for the best freshness. The cans preserve this DIPA's freshness superbly.

Sometimes utilitarian style is the way to go - Saint Archer IPA, Saint Archer IIPA, and now Mosaic... None of this "Mount Hoppiness," or "I did it for the Chinookie"... Mosaic is just straight up and solid down the line. All those West Coast hoppy elements are met by a dose of grassiness like John Wayne rolling around in an Irish meadow with Maureen O'Hara. This is followed by a delicate creaminess like an Eric Clapton solo.

By far the best Saint Archer beer.
AND
one of the best Imperial IPA's in not just SD but all of CA.

I know this is a quick and shitty review but I am slightly too inebriated to compose a proper and detailed summary.

It's fucking delicious people. If they can maintain this quality I hope it could be available more often. Love how they incorporated a few other hops to soften and balance the earthy powerful flavors that mosaics can often release.

Kudos to these guys. Mosaics aren't always easy to make so flawless.

Pours a clear golden-orange with a foamy tan head that settles to a partial film on top of the beer. Small swaths of lace form around the glass on the drink down. Smell is of citrus fruit, citrus zest, tropical fruit, earth, and slight herbal hop aromas. Taste is much the same with sweet citrus juice, citrus zest, tropical fruit, berry, and slight herbal hop flavors on the finish. There is a mild amount of hop bitterness on the palate with each sip. This beer has a good level of carbonation with a crisp mouthfeel. Overall, this is a very good beer with fantastic fruit forward hop characteristics that make this one a treat to drink.

Clear golden orange brew, with a soft white head that maxes out at two fingers. The lacing is sporadic and while plentiful does not coat the glass nicely.

Wonderfully complex hop aroma, immediate tropical pungency though it settles into a predominate pine with floral character. Notes of orange citrus, smooth melon, bell pepper and dark berries flash about. Pale malt is largely a benign presence ans there is a considerable amount of lurking alcohol. A perplexing hop Mosaic is.

Malt here is actually a tad sweet, honey dripped toast and caramel. Hop flavors are very balanced with more orange citrus and pine and less of the hop circus the nose let on. Near the finish there is some pithy bitterness and a rolling warmth of alcohol bringing red berry and orange citrus back into focus.

Say what you want about Saint Archer, the one thing they have down pat is drinkability. A very tight malt base, well hidden alcohol with appropriate body and carbonation.

Beer for the everyman is what I usually say about this brewery but once they established their set of flagship ho-hum beers for their resident surf-skate ambassadors and culture they have begun to branch out a bit. With this DIPA I can say that they have arrived and are definitely on my radar. Yiga & Kim, keep it going!

Shockingly clear, pale gold appearance. The beer was capped by a tight, off white, finger tall cap of froth that quickly dropped to a thin film. Spotty, streaky lacing stuck along the glass.

The nose was outstanding. Super hoppy and fruity. Tropical fruits dominated. Loads of papaya, guava and mango. There was a super dank, weed-like quality as well. Passionfruit really came forth as the beer warmed.

The taste was similar to the aroma and just as stellar. Uber topical with huge notes of pineapple, mango and papaya. Loads of passionfruit. The beer was very citrusy as well. Candied orange peel came through strong. Orange rind appeared in the finish. Just a touch of bitterness. Even with such a thin malt bill, the beer was perfectly balanced.

The mouthfeel was amazing. A fine and zippy yet soft effervescence gave the beer an amazingly plush frothiness. Ultra creamy, smooth and supple on the palate.

I typically prefer soft, juicy and tropical fruit-forward Vermont-style IPAs and double IPAs over more dry and resinous West Coast-style versions, but this beer brought together the best of both worlds. This is a truly killer DIPA from a brewery that I would love to see distributed on the East Coast.

Plenty of white foam on the dark golden brew. Lots of lacing in the tall Maredsous goblet. Sparkling mouthfeel that is hot with alcohol, but in a nice way.

Waves of flowers in the aroma, sweet like gardenias. Some piney bitterness with a little lime peel in the aftertaste. Very prickly carbnation along with the acidic hop oils. Deliriously fragrant. Orange, melon, hibiscus, lemon grass, mango-- a fruit salad with a dose of bitters.

Mosaic hops are showcased well here. Yet another in the current swell of excellent big IPAs. By far the best ever from St. Archer. From the 22 oz bottle purchased at Bottlecraft in North Park.

Poured from a 22 oz bottle into a pint glass. Acquired as an extra in a trade.

Pours a golden straw clear body with a white head that reduces fairly quickly to leave a little lacing and retention. Not the most interesting but I don't judge a book by it's cover.

On those it's grassy, floral, slightly earthy with an almost onion-ness to it. I usually get these notes from mosaic hop IPAs.

Overall it wasn't anything I wasn't expecting - I generally get these overly grassy, oniony notes from Mosaic hops and they're not my favorite, but this was still a good drink and very flavorful.

ryanf2192 from District of Columbia