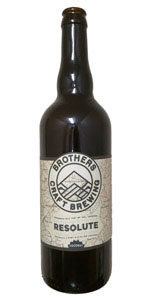 L: Floaties! Doesn't bother me, but a look very similar to Prop 2013. Motor oil.
S: First take yielded fudge, but during the second take is when the coconut explosion takes place. Coconut ended up dominating the nose over the fudge.
T: Just like the taste indicates; TONS of coconut, but almost too much to where it's difficult to enjoy the other components of the base beer/barrel aging.
F: Oily, sticky, but the carb did a nice job of making this smooth and dangerously drinkable.
Overall, this is one of the most authentic coconut stouts out there, if not the single most authentic. However, I would have liked to have gotten more of the base beer instead of (I thought I would never say this) an over-dominating coconut profile.

This is a perfect BA coconut stout. Incredible coconut nose, something that's difficult to achieve and far exceeded all other BA coconut stouts on that front. Complete Almond joy coconut bomb on the flavor, but more natural. Beautiful thick mouth feel. I'd have a hard time choosing between this and Prop '13.

I went through a lot to be able to acquire this beer. It's 600 bottle count makes it one of the true Virginia whalez. The pour on this beer is great with very minimal head and little to no lacing. The smell is of bitter chocolate, bourbon, vanilla and real coconut. Past this, the beer falls short. So many people speak of this being the best smelling beer they have ever experienced without stopping to really mention the actual drinkability of it. Upon letting the variant warm up, I got all of the soy sauce flavors reviewers complain about in Dark Lord. The coconut flavor is barely there if present at all. The mouthfeel is thick and oily leaving a bad coating behind. Overall, this beer is way too overhyped. This is likely a result of hoarders playing into the hype train to inflate the secondary market value of a mediocre beer. In the end, I would have paid $25 for this beer and been satisfied but I traded away way too much to get ahold of it. Not worth your Vanilla Ryes people. Instead, enjoy a Kentucky Christmas Morning if you have it.

Absolutely one of the finest brews to come out of the state of Virginia. This is the best use of coconut in a beer that I've had to date, and it really stole the show at Resolute Day. It contains everything that makes Resolute 'world-class', but has the perfect amount of toasted coconut on the nose and palate, which plays wonderfully with the well-balanced chocolate and bourbon notes. It's a shame that they only produced 600 bottles.

Coconut bomb. Maybe the most coconut Ive ever had in a single beer. Not as good as Coconut mexican cake, but more coconut than ANTEAD coconut. Best VA beer?

I've been drinking Resolute since the very first release (added the beer on BA actually, ok yeah I'll shut up lol) and this year's batch was the best yet I think. With coconut in there too, well wow.

M: So smooth. This beer is an absolute pleasure to drink.

Was, hands down, the best beer I had at Resolute Day. I'm a vanilla fiend and expected to like the Double Vanilla but the coconut stole the show. Would love to have this all the time.

I'll start of that I don't like coconut. Probably the texture, so it may not apply here, although I tend to not like coconut beers. This beer is turned me.

Had this on draft at Resolute Day. Amazing coconut nose that comes through in the taste with vanilla, chocolate and bourbon. May prefer a bit more chewiness to it, but that is really just pulling hairs trying to find something wrong. This is fantastic. I hope they make this again.

May be the best nose I've ever smelled on a stout. Boozy with lots of coconut. Thick in the mouth with some heat, I almost wish I had aged a little, but this is delicious as is.

Hands down the best Virginia beer I've ever had. I expected to love the vanilla variant but this blew it out of the water. Finally a beer that delivers on the coconut.

Pours a dark black medium body with minimal head. Smells of Bourbon and coconut. Nice balance on the taste of the booze and the coconut. Nice lingering coconut finish but not overpowering. Just wish the mouthfeel was a little thicker and it would have been perfect. But still incredible.

Had this with almost a year on it. Just a but of heat and happy bitterness left over, but this would have been perfect otherwise. Amazing. Still plenty of coconut, great mouthful, A+ brew.