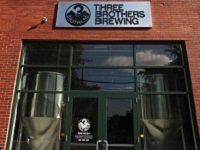 Reviewed by mellonsm from Pennsylvania

Rated by howardnss from Pennsylvania

4.06/5  rDev -6.9%
vibe: 4 | quality: 3.75 | service: 4.5 | selection: 4
Pretty much empty on my visit damn virus...large open room inside and a small set up of tables out. I bet it could get damn noisy in there! Wandered in on a lazy Sunday. Maybe 10 people outside at patio tables. Service was fine it wasn't like they were busy. Decent selection of 12 or more beers. Had a helles and their breakfast stout. While both were good I was not blown away by either. Had a bottle or 2 elsewhere while in town all seemed to run together for me. Would definitely go back and give them a second chance. Might have been an off day for me in the long run...have always heard they were the best in town but in my travels I think they have some competition.
Jun 29, 2020
Rated: 4.15 by Rideguy64 from Massachusetts

Rated by LAND_MINE from Virginia

Rated by RyskeeVA from Virginia

4.36/5  rDev 0%
vibe: 4 | quality: 4.25 | service: 4.75 | selection: 4.25
Went for the Resolute release so there were several hundred people in attendance. Despite that, customer service was fantastic. Didn't have to wait long in line for a beer, they rotated through special kegs fast enough to keep the lines at bay and had plenty on tap of Resolute, it's variants both this and previous years. The interior is quite nice, good seating selection. Staff was friendly, attentive, could hardly tell that they were holding a big release. Guest taps were great, included beers from Aslin (Master of Karate), Veil (White Ferrari), Triple Crossing (Battle Creek), and Ocelot, among others.
Nov 19, 2017
Rated: 3.72 by brocktune from Virginia

4.14/5  rDev -5%
vibe: 4 | quality: 4 | service: 4 | selection: 4.5
Stopped here right when they opened just to get a few bottles to take home and have a flight. The place is pretty nice. The selection is solid. The service was good too. There were a couple bottles I would of liked to buy but they were onsite consumption only and I was driving so that wasn't going to work for me. Maybe Next time.
Oct 10, 2016
Rated: 4.7 by VBWharfRat from Virginia

Reviewed by AldoRaine14 from Maryland

4.64/5  rDev +6.4%
vibe: 4.5 | quality: 4.5 | service: 5 | selection: 4.5
Long overdue review from Resolute Day (11/14/15). I only give it ~4.5 across the board because there is always room for improvement and the bros are up to it. Not only was this event well organized, but enjoyable. A ticketing system that allowed me to go up the night before, "get in line", and guarantee myself beer. The day of, I not only arrived late, but didn't lose the number I obtained the night before on my ticket/wristband. A rotation of guest taps, food trucks, and a laid back environment, what more can you ask for? Beer was distributed ~25 numbers at a time that were called with a ~10 minute buffer. No standing in line and talking to the same people for hours. Just come up, hang around, listen for your number and enjoy some great beer. The guest taps were phenomenal (CBS and Miami Madness being the highlights) and the staff handled the crowds very well. The staff, from owners to volunteers, ran a great show and I plan on coming back whenever possible. After drinking several world class beers before, during and after the event. I found myself coming back for more and more Cutting Teeth, the mosaic..? pale they had at the time. These guys are doing great stuff and if you ever want to 'go back to college' for a weekend, rest assured there is great beer waiting for you as well.
May 29, 2016

Reviewed by Vtaranto from Virginia

Reviewed by Zebulan from Virginia

4.8/5  rDev +10.1%
vibe: 4.5 | quality: 5 | service: 5 | selection: 4.5
Very nice place. On most visits its calm and quiet. On weekend nights they do have music which can get loud just by the nature of the size. All people that work there are very friendly and helpful. Most of all their beers are great. If they have the Resolute or any variants of while you are there get it!!!
Jan 26, 2016
Rated: 4.27 by macshark from Virginia

Rated by gs556 from Missouri

Reviewed by cello62 from Virginia

4.32/5  rDev -0.9%
vibe: 4.25 | quality: 4.25 | service: 4.5 | selection: 4.25
Located just a little bit outside the outskirts of the city, there's still a very welcoming vibe. Excellent tap room, woody and warm brown colors but not horrifically dark. An adjacent lounge room with comfy chairs is also a real nice inviting spot, with some outside patio area along the side.

Quality of brews are pretty solid with a step up above average to excellent. Top notch service from the bartender who can make excellent recommendations and is very familiar with the product. Taps list change but also the styles are varied, with some good take home sales available as well.

Real nice stop for a pint if you are in Harrisonburg.

Reviewed by LeeEvolved from Virginia

2.5/5  rDev -42.7%
vibe: 2.5 | quality: 2.5 | service: 2.5 | selection: 2.5
My only visit to the brewery to this point was on Resolute Day back in November of 2014. It was freakishly cold outside while waiting for sales to begin at noon. Once all that nastiness passed I was able to hang out in the warm taproom and sample some really good 3Bros offerings.

The place has a cool vibe to it and the staff were hustling due to the large crowds, so I can't give a detailed review of how service may be on a normal operating day.

Overall, I look forward to hanging out there several more times in 2015 as I joined the initial brewery membership, Horizon Society. I'm excited to see what they come up with for members and distribution as well. I hope they really dial up their sour program.

Update 12/2015. This place has really fallen off over the past year. The quality of the beers has dropped considerably IMO and the initial launch of the aforementioned Horizon Society was almost a complete bust: promised beers not delivered, delays, poor quality of the HS beer in general and lack of the to brewery staff to take any blame. It took a lot of nerve to ask for membership renewals, all while hiking up the price. Bad form, Bros. I won't be purchasing beer from or visiting this brewery again any time soon. I hope they get back to what they were pre name change, but I don't have high hopes. That said- good luck, Bros.

Rated by Archangel34 from Virginia