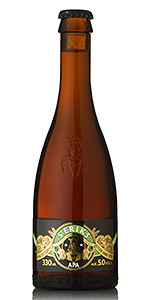 I had recently tasted this beer at a party and was impressed, so I grabbed a hold of another one to do an honest review.

L: Straw in color. Close but not completely translucent. Not much effervescence released despite a vigorous pour. Basically no head produced.
S: The smell is sweet and a little hoppy. Light notes of pine. Light fruity notes of mango, apple, and grape.
T: Very smooth. Much less aggressive than I originally remembered. The hop flavors feel well balanced, but leaves a desire for a little more kick from the malts. Very high drinkability. Tastes light enough to be a session ale. Overall, quite nice. Hits all the mid-range flavors very well. Has just enough hop characteristics to satisfy a hop-head, but is not overpowering enough to offend someone who isn't quite into hoppy beers.
F: Really smooth. A little tannin-y straw/hay/barley/cereal feel on the aftertaste, with a little bit of lingering hop flavor reminiscent of citrus or mangoes.
O: This beer is good. I wasn't blown away or anything, but it was a good representation of an american pale ale style. At its price point of about 20 SEK, I think it was worth the try, but I'll probably reach for something else next time.

I couldn't help but try this Swedish take on American Pale Ale. Hooray for America being a rule maker of beer styles to be emulated in the Old World. 330 mL bottle (very fancy, long tapered neck with royal images embossed). Best before reads "3 03-26" on the first line and "359" on the second, though I have no idea what that means.

Beer pours a crystal orange amber with lots of bubbles and a pleasing off-white head. Aroma is pleasantly hoppy and even Cascadey and floral, suggesting even a low strength American IPA. Impressive. Flavor is less so, unfortunately. Flavor profile has hops and bitterness up front, but totally empty in the middle, and lacks malt backbone to carry it through. It does finish mostly dry and without aftertaste, at least.

A: Pours amber with a rather small white creamy compact head that sinks into decent lacings.

S: Hoppy and bready malty. Dark bread and bitter hops, but slighlty artificial in smell. Nettles. Not very American when it comes to the hops.

T: Still mostly nettles and bitter hops. The malt has some sweetness to it, but very faint. Some fruityness and some flowers.

O: One question about this unbalanced all-over-the-place APA; Where is the American in this one?

A clear light amber brew, an off-white foamy head leaving some lacing and having small curtains.

Staring with sweet white bread, then some old apple nuances, a hint of oranges and crushed lemon seeds.

A so so beer, lacks character in some way. The smell did not put me on.

Testing this beer well chilled poured into a tulip glass from a bottle.

A: A truly pale and very clear beer is poured out from the bottle into the glass, creating a small foamy head with rather large bubbles that shrinks fast. Twirling the glass increases the foam head, and shrinks rather quick again.

S: The smell is pretty hoppy and well balanced with plenty of malts too. It's a pretty clean simple smell that goes well with appearance.

T: As picked up from the both the appearance and the smell i'm pretty surprised (and it's a positive one!) that the taste got that strong bitterness. The malt has to stand back somewhat for all the bitter hops in here.

M: A nice and easy drinkable beer with lots of bitterness that stays for a while. I would have appreciated some more carbonation here to start with, guess this beer will be pretty dull if i don't finish it quick enough.

O: A nice clean APA with well balanced appearance and smell. There's a surprising strong bitterness hidden in the taste. It could though need some more carbonation, then it would be more enjoyed for a longer time.

The colour is amber (20 EBC), the liquid is clear. The two finger white head quickly sinks down leaving some lacing on the glass.

The smell is a bit hoppy with some bitterness. Dry notes of green bananas and other unripe fruits. Some cream/toffee.

The taste is bitter and fresh. Some anonymous fruity notes, hints of butterscotch. Dried fruits and flowers. Medium body. Notes of dough and butter in the medium-bitter aftertaste as well as a robust bitterness. The finish is a bit dry with some fruitiness.

The carbonation is strong; the many small bubbles are fresh. The liquid is a bit dry.

A bit unclean and one-dimensional.